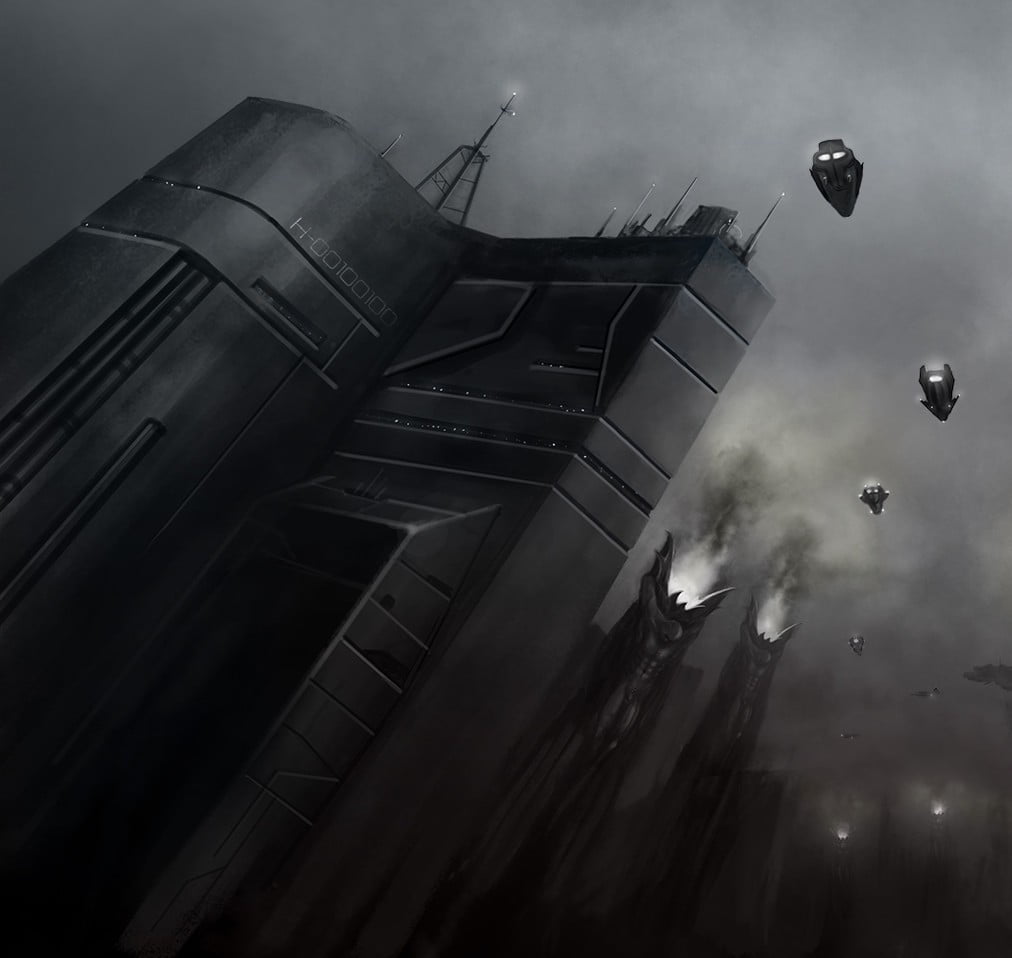 Brad has seen many things, defeated many opponents, and felt an world’s worth of pain… but what has happened, has left him weeping alone, bleeding and hurting.

Upon entering his own world using advanced technologies, Brad has been ambushed, shot about a dozen times – with 50 caliber bullets – and left to grieve alone in his sad, stormy city. Lying on his back in a small plaza, surrounded by a shell of skyscrapers and modern buildings, Brad seems to be immobilized. Maybe it’s the pain of the shot wounds, or maybe it’s his sorrow. Either way, he’s not moving. The poor owl cries softly, tears rolling down his beautiful face. All the blood on his front side has been washed off by heavy rain, and he seems to have healed his broken bones and shot wounds. After all, he made this world – it helps to have rapid healing. However, the injuries may be gone, but the mental and physical pain… it’s slowly breaking him. The pulses of sharp pain he feels with every heartbeat? They might as well be meat cleavers hammered into his wings. But, more importantly… why would someone do this? Who the actual fuck would go through hell to duplicate Brad’s years of work, failing multiple times, just to use it against him? Well, whoever has done this must hate Brad. With a fiery passion. And that, Brad hates. The last thing the poor guy wanted was to be despised by anyone, even his former prey. Who would do this and why? Well… Brad has no idea. The truth is, he’s been hunted down by Ruby BloodFang, because of his alliance with Sasuke Firemist. To make things worse for him, Brad was the first one to counter the Orc Invasion of Persistence – something that’s given Ruby an appetite for revenge. As the owl cries alone, a sudden presence can be sensed. Something dark, and perhaps Lovecraftian. Sure enough, some giant fox tails, made of pure shadow, reach towards Brad and wrap him in shadow. As his world gradually darkens, Brad opens his eyes, tears rushing out. The owl’s crying eases slightly, and the tails retreat. And as the poor guy looks up… there stands a giant fox. Made of pure shadow, it stands about 14 stories tall, around 151’7. Brad looks up into its red, glowing eyes. “Damn, you don’t fight to the death, yet that bitch Sasuke hired you for her army?”, its demonic female voice asks, frustrated. The fox shakes its head, and Brad whimpers a little. “Tell me, what is it you desire in life?”

Brad closes his eyes and cries a little. It’s hard to fight after being shot a dozen times with armour-piercing bullets. He knows there’s a question hanging around… but he’s too sad to even begin to talk. “Spit it out, little chicken!”, the fox barks. Brad whimpers a little, knowing damn well he needs to answer. Awkward and scared, the owl stutters for a little bit. “I… I just want…” it seems he’s too sad and shaken to find his words at the moment. The fox rolls its black pupils. “I just want to be loved…”, Brad finally manages to say. His voice sounds innocent and quite beautiful, almost like Myles Kennedy. And what he says is true – he desperately longs for a true friend… he hasn’t had one since his first – and only – mate died. After saying that, the poor owl begins to sob quietly.

“A friend? That is all you wish for in life?” The fox walks over to Brad, leaning down on the poor, crying bird. “If that is truly all, I will make you a deal.”. Brad slowly, and shakily, looks up at the fox with sad, tear-filled eyes. “If you serve me, I will give you as many friends as you wish. All you must do, is serve and protect me.” She holds out a large paw, waiting for an answer. “Not just I, either. All those that have made deals with me, will be by your side, for the rest of your life. Many will be your friends.”, the fox offers. However… Brad isn’t buying it. He knows Ruby is evil, and God knows what she does to who she makes “deals” with. He doesn’t want to accept that offer – but how will she react if he declines?

Still crying softly, Brad looks down, then up again at the huge fox before him. He’s almost too afraid to answer. The owl goes to answer… “I… c-ca…” He seems to be extremely shaken. “I… I can’t, Ruby… I don’t want to abandon Sasuke…” He looks down, almost as if he’s in shame. “I’m sorry…”, he’d say as he looks up to the fox’s eyes with a sad glare.

Ruby huffs. “I will tell you this, silly bird, she cares nothing for you. She picked you because you’re skilled, but that was it!”, she barks. Brad seems unaffacted by those words. “Once she is done with you, she’ll throw you out like the trash she sees you as. Think about this, I can reach you even in your safest spots. I can kill you in public, and destroy all you love, so I suggest you take time to think on this.”

Brad suddenly gets up and backs away. He shakes his head desperately, and there is a worried look on his face. “Please, don’t hurt me…”, he pleas. “My morale is too high to accept that… if I can change, I hope I never know!” The bird suddenly begins to fly away from the huge fox, hurting with each flap of his wings. He knows that the objects in this world will repair themselves instantly – but that doesn’t mean Brad is safe. The scared owl turns a corner and flies as hard as he can, seriously hindered by his pain.

“BRAAAAAAAAAAAAAD!” There is a demonic roar out of sight while the sound of heavy footsteps can be heard, getting closer. Hearing the roaring and footsteps, Brad desperately flies harder, trying to squeeze every last bit of flight he can get out of himself. However, those wounds which were on his front side begin to take a toll – and eventually, the pain is too much. Brad has a high pain tolerance – but this pain is incredible, in a horrendous way. The poor owl plummets, slamming into a road and tumbling until he slides to a halt on his belly. He’s feeling a brutal pain in the core of his chest outwards. He knows he’s gotten on someone’s nerves – and he hates that – he almost wants to apologize to that beast. The poor, scared owl lies on his belly, exhausted and crying. In mere moments, Ruby is overlooking a crying and injured Brad, the road cracking with every single step she made to get there. The poor owl has ripped a shoulder muscle, and is suffering from internal bleeding and severe pain as a result. With his right wing on the ground and unable to move easily, there’s no easy way out this time. Ruby cackles a little bit.

Ruby suddenly lowers her tail onto Brad – but he is not injured… instead, trillions upon trillions of voices can be heard within the tail. These voices scream out in anger and devastation, for they haven’t been able to escape or be saved from Ruby’s wrath. Brad winces hard – owls have insanely sensitive hearing. It’s like static, there are so many voices that they can’t be told apart. “Feel the pain of those the heroes couldn’t save at Persistence, and more importantly, the ones you couldn’t save?!”, Ruby asks, with a wicked smile. “Are you truly risking everything for them?” Well… we all know what comes next…

“I’m… I’m sorry…”, Brad muses to the voices, weeping silently. “I-I’m trying my best…” The owl is, to say the least, sorrowful about this. A dark, brooding feeling is hauling itself over Brad, an eerily familiar thing to him. It’s giving him bloodlust… but not for the blood of anyone else – he wants to hurt himself. Ruby just laughs. “These beings are those that you and heroes cannot save. I can take trillions a day if I wish…” She cackles. “Better not be bad, birdie!”, Ruby barks as she disappears, exiting the stormy city. Brad just keeps crying, shocked and saddened by all the souls he failed to save. The poor owl can’t even put his feelings into words. All he can do is sob silently, the rain soaking him and everything around. Everything is sad now – Brad, his little world, perhaps even his life. The poor owl heaves up to his feet and exits his world, healing in the process. His muscle may have healed, and the physical pain is no more… but he will still suffer badly. It will take a while for him to get his self-esteem and confidence back to normal, that’s for sure. And, of course, the poor owl will surely be depressed and weeping for God knows how long.

Brad, scared and crying, slowly makes his way to his secondary home in Persistence – a room in the Red Sun Inn. His talons click on the hardwood floor of the hallway, then scratch as he stops in front of his door. After opening it softly and shutting it quietly behind him, the crying owl hears a voice in front of him. Brad gasps softly. And then, he glomps his former owner, landing on her bed. He holds her close to his fluffy chest. “S-Sassy…”, the owl mutters with a scared and innocent voice. “We need to talk…”