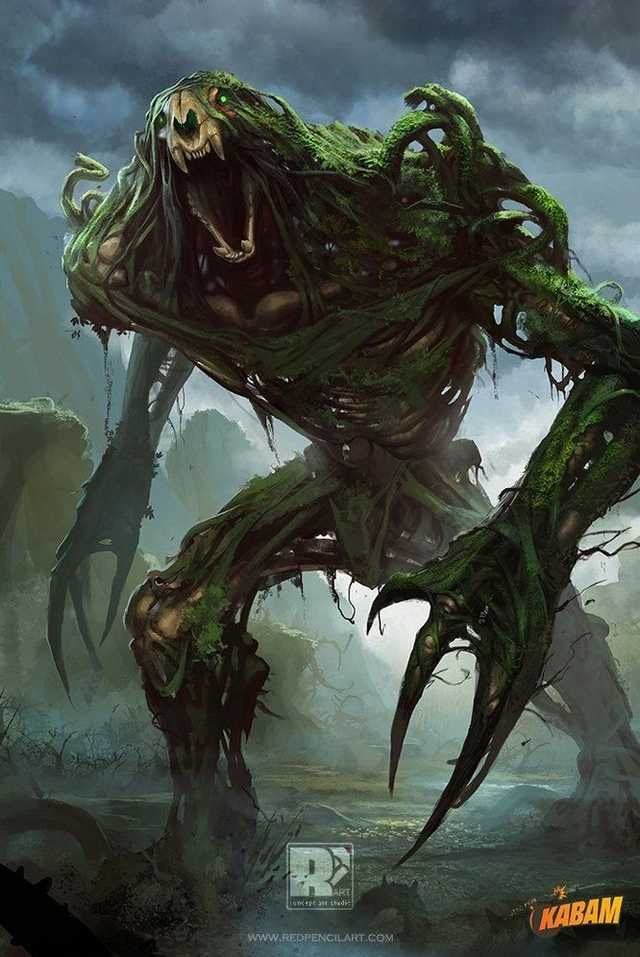 This was going to be a wild ride… Today’s supplies were yet more gifts — well, some were meant for disposal and others were gifted simply through his supplier’s curiosity. Of course Timothy would not complain. It was a new experiment, a new branch of Amalgamation.

First, he needed the base. The theme of all his new supplies revolved around plant life… the dark side of flora. “Alrighty… So we’re not allowing clay bodies, soooo… Wood base… Tiny skeleton, let’s get it.” With the little pep talk, he carefully pushed the vials, tubes and boxes to one side of his cluttered work bench and began collecting the “core” materials.

“Sap of the Gulthias tree,” he read off one of the vials. The thick red ichor inside looked… lovely… “Scraping of an Ent’s inner thoughts…” Treant brains, basically… little more than long slivers of wood in a tube. “Aaand good ol’ Ironwood fibers.” Talking to himself helped organize his thoughts.

“Waitwaitwait, quartz… no, can’t use quartz it’s not organic….” His fingers tapped idly on the table as he had to rethink his approach. Eyes scanning the box, they caught sight of a label of particular interest. Plucking up a box of corpse flower bulbs, he had to harken back to his schoolboy days of mythical botony. “These things are kinda psionic, right?” They could speak telepathically… close enough. Maybe.

After grinding the bulbs into a fine mush, he mixed it in with the gulthias tree sap. It was a long shot, but he used the goopy paste to bind the two slivers of wood together to form a sticky… stick. “Oooboy, that’s not going to be nearly enough…”

At first he thought to pause and seek out more supplies, but a thought hit him. Two carniverous plants… one of which was supposedly still “alive” or at least undead-ish… He took a needle used for stitching hides to prick his finger and allow a drop onto the red sap.  The sap slowly spread to encase more of the slivers of wood it bound together. Now that’s interesting!

With little under an hour of shopping, Timothy returned with a few “side” ingredients… feeding mice meant for snakes. Taking one out of the cage, he donned protective gloves and skewered a mouse with the sticky stick. In a matter of minutes, the mouse seemed to be devoured from the inside out and the “stick” grew. It almost adhered together entirely, gulthias and corpseflower paste swallowing the slivers entirely.

Left to sit overnight, Timothy returned to a stick nearly as long as his arms, five times the base size… Well, now I have material… The process was repeated, eventually including a planter full of compost, watered with pigs blood. It worked. In just a few days, the rudamentary amalgam had bound itself together enough and sprouted into a makeshift chimera tree. The treant and ironwood had not fully fused, leaving it looking unnaturally off-colored.

He hoped that would rectify itself in the awakening phase. His next step was to bore a hole into the trunk and place within it the bulb of an unbloomed corpse flower. The stench was almost unbearable after the crate was opened. Assassin vines were draped over a few of the tree’s smaller branches. A final touch of the body included draping large swaths of innert cavelight moss over it.

Awakening the tree was the most difficult quandry. “breathing” life into it was not necessary, and for all intents and purposes it was already “alive” — at least moreso than the clay… It did not seem sentient like the Treant or animated like the Carnivorous Flower.

With that in mind, he donned the moonstone tiara and tried to seek out a mental signature. Treants had one, he was positive of that. Fucking sweet! While finding no signature would be bad, finding a voidspace of empty mind was the best result. The treant and corpse flower were blank after their minor processing.

Now the true work would begin. Using that tiara to implant “thoughts” into the mental void acted as programming. Since there was no awakening, Timothy began with organizing how this creature should grow. Wood should act as a skeleton. The sticky sap as lubrication for joints. Moss as skin, and vines as additional tendrils. In concept it was simple, in practice just defining the form it should grow into took several hours.

Then language… then basic knowledge of survival and instinct. A general understanding of what it should be able to do. Interactions with people. Patience. Lots… and lots of patience… he did not want this monstrocity losing its temper if it acquired one. Caution and restraint. It had means of destruction, but it should not have the aimless will to cause it.

Hours blended into days of mind-numbing psionic programming until he was sure the tiara would leave a permanent dent in his skull. On the plus side, as he was programming the mental aspect, he did get to bear witness to the creature’s new growing patterns. Limbs, legs, a mock ribcage to house the growing corpse flower, and a skull much like that of an animal. The “bones” were made of a perfectly fused treant and ironwood, and the sap lined between fiber and bark and conjoined the segments at the desired joints.

The moss clung in uneven patches, but that just gave this monstrocity all the more menacing a look. The vines seemed to withdraw into itself, and for the life of him, Timothy could not figure out why.

On the nineth day of labor, Timothy finally deemed the project completed. “Alright, big guy… Can you walk?” Thus far it had not even moved. On Timothy’s request, however, the “jaw” of the creature opened and released a low clicking. One trunk uprooted itself from the pot of bloody mulch to take a step forward. Then the other. “Oh Jesus fucking Christ, that’s freaky.”

More clicking followed… “Nononono, nothing’s wrong with you… I just wasn’t expecting … well, I wasn’t expecting you to work as well as you did. How do you feel?” The creature tilted its head, shifted the moss covered bones, then clicked in that low pitch horror-film way. “You’ll get used to your body. Pikachu was the same way. “I’m glad you worked first try, but we’ll keep an eye on you to make sure everything goes well. Are you hungry?”

It was almost a nightmare watching the carnivorous tree devour a whole potbelly pig… but all the more promising. “Yea… I don’t think I’m going to sell you, my friend…” This one might be too dangerous if the new owner was not attentative.