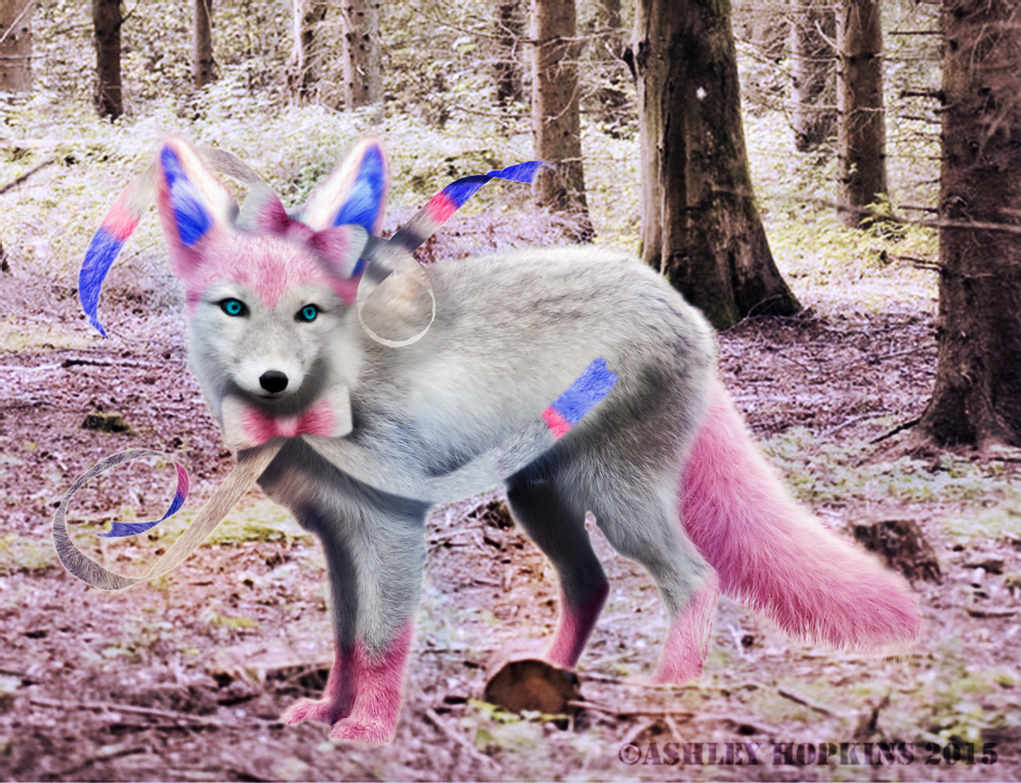 Timothy’s anxiety levels were through the roof. When he accepted the task of whipping up a protective Sylveon, he had no idea his would-be “boss” was an assassin. There was that little voice in the back of his head screaming “If you fuck this up, you die!” The vast array of expensive materials had him worried that, eventually, she would come for payment out of his skin if he failed.

So of course… he would not fail. He spent hours molding soft clay, folding several pounds of finely ground quartz into the amalgam-dough until he believed it evenly spread. When it came to shaping, he took inspiration from wolves and foxes, considering the desired amalgam was… somewhere in between. Quadrapedal, small, cute face… The clay took almost ten hours to shape “close enough” especially when it came to the four neck-tail-things.

As usual, keeping a hollow space in the soft clay form’s “chest” area was perhaps the hardest. His usual technique of inflating a balloon within the chest, then popping it was somewhat effective, but as always, trying to dig out all the remnants through the narrow mouth with a stick was a pain in the rear.

Then came the “fun” part. By the time Timothy came to fleshing pelts graciously given by a few hunter friends more interested in the innards, he had almost forgotten the potential consequence of failure. After removing remnants of wolf or fox meat from the pelt, he skipped the curing and laid the hide in careful arrangements over the wet clay. He was almost adhering the moist clay to the blood-damp underside of the hide as a makeshift, early-stage binding agent.

Emuna had given a plethura of gems… After a quick search at the library, he decided to place two small aquamarine gems into the eyes. Peace, communication, empowerment — maybe the gems would make great eyes for this protective creature? He had never attempted gemcrafting, making this… highly subjective.

With the body mostly completed, it was time to add in the extra “ingredients.” The ability to teleport was one most desired. He had requested a fragment of the desired location as seen from the astral perspective. The vial of ghost-stone was emptied, the hide pealed back over the head, and the stone pressed into the soft clay at the top of the skull until it was depressed nice and smooth. It was the “Keep this place in mind” tactic. Already, veins of gray spread through the clay nearby. That was a good sign.

Healing next… A phoenix tear was also in the list of ingredients given by Emuna. This powerful item was… a new test trial. The first thought was to put it in the sapphire eyes, but he feared the fur would make crying difficult. Instead, Timothy shaped a tongue out of soft clay, folding in quartz and the crystal before adhering it into the bottom portion of the jaw. Healing saliva might do the trick?

All that was left for the physical body was the dyed fur. For this, he ground up kyanite into blue paint. It was supposed to enable psychic abilities, communication and lucid dreaming according to a quick internet search. For the pink… Rose quartz… Emotional healing is the internet’s general depiction, but more wordy and pretty than Timothy cared to remember all of. Ground rose quartz was added into a portion of pink paint.

The painting was almost cathartic. While “dying” the fir was not entirely necessary with the next steps, any slip-ups would be painfully obvious when the paint becomes permanent. The deep focus, but little manual labor was mind-numbing but relaxing at the same time. Blue and pink on a stark white coat.

White… Fuck. More clear quartz! Normally he used the material as a conductor for psionic programming within the clay, but in the fur? Supposedly it had its own mental and emotional healing properties. Who knows how that will turn out in fur. Of course, most of the gems used in crafting this creature were purely experimental.

Painting done, the crude-looking fox-Sylveon creature was… a bit nightmarish… but it did not need to be perfect. The next step would fix most of the malformations.

Timothy dawned his next set of “tools.” A moonstone tiara, a bit too small that it canted off his head slightly, and an amulet of vitality. The sensations were always jarring. The tiara allowed him to feel the mental presence of others around him and in his small apartment complex, there were plenty of people… and if he desired, he could whisper into their minds and hear their response.

The amulet gave the man a burst of energy; it almost made him want to stand and jump around if he were not bound to his wheelchair. Even then, the normal little wiggle he could perform with his toes became a wiggle of his whole foot — but that was still extremely exhausting to the frail muscles.

Tools in place, the man gently placed a rubber tube down the hollow throat of the clay figure. Closing his eyes and taking a breath, he focused through that psionic tiara on pulling qi from the amulet, channel it through his breath, through the tube, into the hollow within the clay. With each breath, the hides stitched themselves together and formed more tightly over the clay. The jewels for eyes gained the slightest spark.

Even with the amulet of vitality, pulling from his own chi was extremely taxing, considering he had no more than the common modern man. The magical items offering control did little to actually boost their quantity. In the end though, he felt a pressure against the other end of the tube, as if something were blowing through it the opposite way. The clay-and-hide creature began to breathe.

The rubber tube was removed to let the creature breathe normally. While it was technically “alive” it knew only to breath. “Alrighty, final stretch…” By this time, some thirty hours — many of which during sleepless nights — had gone into the project.

The final step was to reach out mentally through that tiara to tap into the void of mental space the quartz created. Timothy then spent hours upon hours more “teaching” the Sylveon how to simply exist. How to walk, how to make noise, how to see and how to smell. He taught the Sylveon things like the common language so it could understand, along with facial expressions and body language.

He had to think in a way far more rudimentary than his day-to-day life, building on base concepts until he could form complex thoughts to implant. This part was always mentally taxing, and this creature had a LOT of things going into it. By the nineth hour of mental labor, Timothy had become so mentally drained he fell asleep at the work bench.

When he awoke, he did so full of energy. There was no stiffness of back or neck, despite his pained position, though his legs had fallen numb. Wiping drool from his mouth, he realized why. The sylveon had moved off the table sometime during his sleep to curl up in his lap. The long tendrils wrapped around his wrists comfortingly.

Was he supposed to be worried about something? Probably. Of course, he could not be bothered with the calming touch of the blue and pink appendages.