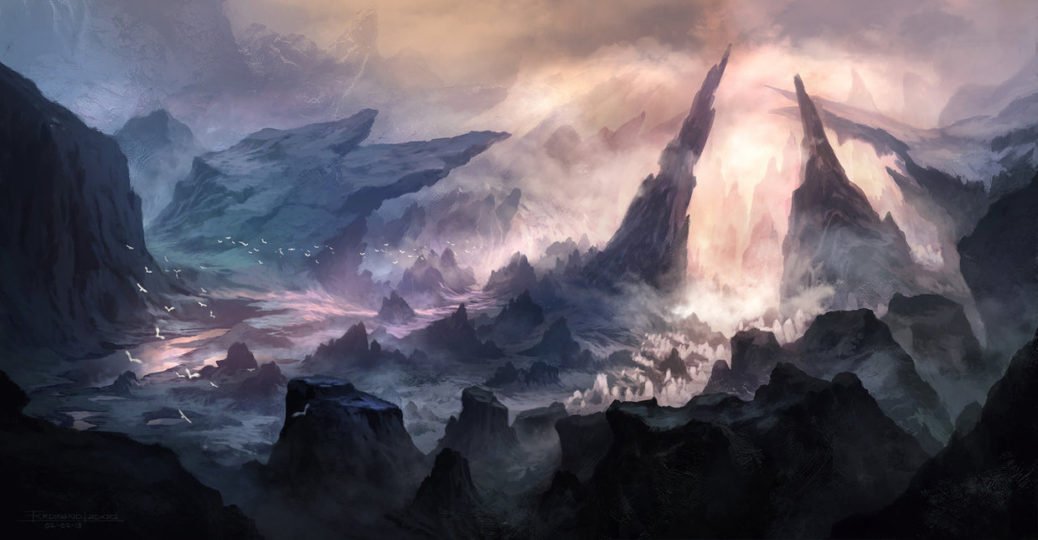 His palms were sweaty, his knees were weak, his arms were heavy. Wait…let’s not go there. This was obviously an entirely different kind of battlefield. Xandros did, however, have a deep seeded ache in his shoulders, as if he had the weight of the world pressing down on them. He stood in the middle of a massive battleground, a vast valley most had called the Dragon’s Gullet. Some said this was where the World Serpent Jormungand swallowed most of the Norse Gods, including their greatest champion, Thor. Xandros’ own ancestor, Fenrir, was said to have eaten Odin whole in this very valley as well.

Whatever the truth was, it wasn’t something Xandros had the time, nor will to dwell on right that moment. He was in the middle of his own great battle. The irony of the location didn’t COMPLETELY fly over his head however. He stood atop a small hill near the middle of the Northern edge of the valley. To his left was a great gorge, the sound of rushing water heavy in his ears as a large river flow over into it’s depths. Of course that gorge hadn’t been there ten minutes ago. It just so happened that the current battle caused Xandros to do a bit of redecorating. It was that redecorating that was putting all the pressure on his shoulders currently.

To his right was a great mountain range, it’s vast peaks seeming to reach up into the dark, heavy clouds, like Fenrir’s great teeth seeking to take a bite from the heavens. Spread out before him, where the ravages of battles long past had been healed by the Earth after centuries of healthy growth, wounds, both old and knew had opened up and spread throughout the Dragon’s Gullet. The signs of conflict were profound as torn earth strewn in such a violent, chaotic fashion that it seemed a natural disaster had befallen the place. Trees were shattered, even those that had stood for thousands of years had been splintered and laid to waste on the outskirts of the valley. It wasn’t just natural destruction that had seen this place torn once more.

There was a deep seeded darkness, an ancient rot that seemed to be eating away at the life energy of the Valley. Where Gods had once died, their essence had absorbed into the earth, becoming one with it’s life force causing ages of growth to happen in only centuries. That power, however, had been warped into something terrible and now seemed to eat the earth from the inside out instead of healing it. The cause of that rot is what Xandros was facing in that moment. A vast army of dark, poisoned creatures charged him from the distance.

Beasts that had once been of the earth, Trolls, Fae, Great Bears, Dire Wolves, even the Sprites and Elemental Spirits that once thrived here had been turned into hungry nightmares who’s very presence seemed to suck the life out of the air around them. Earth became brittle and hollow beneath their feet, grass and mulch began to dry out and rot with their passing. They had become walking seeds of rage and despair that destroyed everything they had once held dear. Even the air was heavy with the bitter sweet honeysuckle scent of rotting death. Xandros had been able to save a good chunk of the valley from being poisoned by the purifying power of this rotting army, conserving it’s god tinted might. As he stood atop that hill, his arms raised high above his head, his fingers clutching the powerful stone hilt of his great ax, the reason for the newly created gorge was apparent.

The blade of his ax was no longer a blade, but a towering mass of land that had been torn from the Dragon’s Gullet after he had slammed his ax into it. Xandros was no mere viking warrior facing his death at the hands of an army of twisted elemental creatures. He was the last son of the Norse Loam, a once great clan of Earth’s Children who had guarded her power since the dawn of time on this world. Within him was not just the blood of the Earth, but the ever pulsing seed of The Mother’s power, saved from the eternal Rot by cultivating deep within Xandros himself. With the power inherited by not only his Earthen Ancestors through his father’s bloodline, but his also his godly ones, gained through his mother’s bloodline, Xandros purified the huge chunk of Earthen might that had become his weapon, charging it with The Mother’s power, as well as his own.

His great weapon towered over all, casting it’s mighty shadow across the entire valley, dwarfing everything around it, including it’s wielder. The rotting army no longer had the capacity to know fear, and did not stop, rushing towards Xandros like a rotting tide of bloated, petrifying death. Xandros too, knew no fear, and did not move. He waited, his piercing gaze locked upon his enemies, not daring to act until he saw that the last of them had entered the shadow of his worldly weapon. It was if he literally held the weight of the world on his shoulders, and he felt every ton of it. Even as he grit his teeth he smiled. This is what he had been born for, what his father had sacrificed his life for. This was just the beginning of his clan’s revenge, and his land’s revival.

The moment that last wisp of darkness disappeared beneath the shadow of his World’s Ax, Xandros let out a roar that shook the entire valley around him. Even this Army of death seemed to pause, and shudder as they felt a natural heat seep into the unnatural cold that had replaced their essences. Every muscle in Xandros body tensed and locked, his aching shoulders locked tight for just a split second as a last surge of power was fed into that heaven defying weapon. That split second past, and with another deafening roar, Xandros swung with all his might, the shadow spreading upon the valley in a rush as he brought that ax down upon the rushing army with a single momentous strike. The destruction that came after was both terrifying and beautiful at the same time.

It was both a natural disaster, and a great, sweeping healing. As that giant ax impacted into the floor of the great valley, for the second time in history the Earth was changed on a massive scale. The world shook, mountains shattered, breaking into pieces and causing great stone avalanches to flow down into the valley. Even the great river seemed to splash and scatter like someone had stepped into a small puddle on a rainy day. The earth churned like a bowl of freshly kneaded dough, it’s former shape lost forever. The dark army was not only destroyed, but cleansed. The impact of that ax didn’t just smash them all to pieces, but absorbed them into the earth, the power Xandros had fed into it striking out to eradicate the rot from their very cores.

His strike didn’t stop there through. Xandros knew that this army was not his true enemy, but merely an extension of them. The power that had corrupted these beings was a living darkness that had come from a single source, and that source was The Abyssal King Siggeir, the one who had betrayed Xandros’ Volsung clan and brought ruin to his people, and the earth they had protected. The power from Xandros’ strike not only eradicated the darkness from the now defeated army, but reached it’s way back to the source of that rot. Xandros could feel his strike hit home and severely wound King Siggeir, wherever he was. He could hear the dark lord’s wailing scream, even as the power of his army faded out completely.

What was once the Dragon’s Gullet had once again changed, becoming something else entirely. The gorge was gone, filled with shattered earth and loam. The forest had been mostly eradicated, but the life energy that had filled it had been renewed. The mountains that had become shattered had been replaced with new mountains who had risen from the every shifting earth, some reaching even higher than the peaks of before. The only thing that hadn’t changed was the hill that Xandros had stood upon, his own essence rooted deep within it in order to support the power of his strike. The stone handle of his ax was still within his grasp, and the head of his ax once more returned to the cold silver metal blade he usually carried.

The weight of the world had been shed from his shoulders, and with this, Xandros could breath a momentary sigh of relief. This Valley had stood between the lands conquered by King Siggeir’s shadow, and the Northern lands that Xandros had come to call home. Now with a new power radiating through it, even King Siggeir himself wouldn’t dare cross this place for at least five hundred years. This, however, was just the beginning. Xandros had not done this to stave off his enemy. He had done this to send a message. Though his people had fallen, and the old Dragon’s Vein had been destroyed, it’s Earthen power still lived within him, and he could use it to wash King Siggeir’s taint away forever. This was not a warning, but a promise. With another deep breath, Xandros hooked his ax onto his belt and turned, walking down from that hill. He had plans to make before he headed into Siggeir’s poisoned lands. Before that though, he needed a barrel of good meed, and a few big, beautiful women to warm his bones for the rest of the winter!