Balance and Imbalance : A pyrrhic solution? 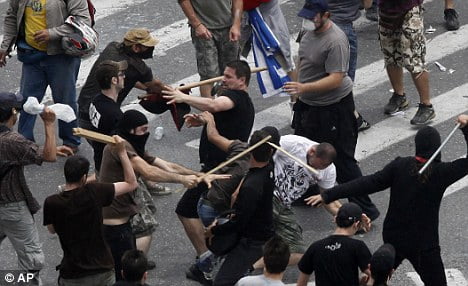 The Scion of Hellifyno awoke after her internal battle and seeing Gwen off, blinking repeatedly as she tried to clear the haze of unconsciousness from her eyes. Anthem’s head pulsated, the pressure of it hurting her to the point that she brought one of her rough hands up to her eye and pressed it trying to counter the pressure. Luckily the migraine was short lived, clearing up with it the haziness in her eyes as she looked around to her surroundings.

Anthem found herself in shorts and a t-shirt, lying in her hammock within the habitat that she built with her own two hands. Beams of sun filtered in from the cracks in the door, and the breathing holes in the sides of the stone building. Pulling off the blanket and tossing it to the side, she tossed her bare, mocha colored legs over the edge of the hammock and down to the bear skinned rug on the ground. She lifted herself up from her bed and teetered in place for a moment, her equilibrium all off. After a solid minute the Kishimoto warrior regained her bearings and took a few steps towards the door.

With a flex of her will, the stone door moved away from the entrance, basking Anthem in the full glory of the unimpeded godly light of autumn sun. It blinded her for a few moments, but once her eyes adjusted those crimson eyes looked around to see her camp. There was the dojo in the middle, a few habitats for her students and other simple things like a shed for firewood or a smoke house for curing meats.

Anthem got dressed for the day, even though it was already early afternoon. While she cleaned up in the river and put on her normal clothes, she thought about what she had just gone through. The Kishimoto woman now understood that she had corruption in her Soul, probably from when she pulled Helvegen from his own fall from grace. It must have been very slowly festering, which is why she felt more and more unbalanced before this point. But taking a breath of FaE madness must have aggregated the condition to the point that she needed that internal battle against it. Instead of expelling her corruption though, or defeating her darkness, the Scion of Hellifyno decided in order to be a more balanced guardian accepted the corruption into her Soul.

In truth, after the migraine subsided, Anthem felt great. Fully dressed and ready to go, the woman found herself in the training field just north of her camp. She worked over the wooden man and found each strike, each movement faster, sharper, and it was accomplished without her even thinking about her actions. There wasn’t much change with the Scion’s physical overall strength, or speed, after she had done her normal workout routine.

Now it was time to switch to her elemental training, which was based on both, in part, her physical wellbeing and her mental health. So when she started with Earth, and with a flick of her wrists she only intended on summoning forth a boulder from beneath the dirt. But instead the Scion of Hellifyno had willed forth the entire plateau that she stood on, lifting the entirely of the training field a few feet into the air before she put it down. Anthem was so flabbergasted with her new found power that she cycled to the next element, the element of Fire.  With twin straight jabs into the air, she focused on the flame that shifted from a natural white into a dazzling blue as the pyre rocketed hundreds of meters into the air. It was amazing to feel this new power coursing through her veins, as she switched from air to water and saw similar changes in both volume of the element and the distance in which she can still exert her will over.

What she didn’t know was that while accepting and allowing her dark side to remain sheltered within her Soul and influence her body, which also came accompanied with the embodiment of dark emotions and thoughts that normally she wouldn’t have. It was as if there was a second entity in Anthem’s Soul, and this one knew what play time meant. . .

But she still had her duty, the responsibility that had rested on her shoulders for many, many years. Even not in her right state of mind Anthem would go forward, getting her stuff together and opening up a portal to the city of Consequence first. Thanks to her little episode, combined with her years of mental training and being the Scion of Hellifyno had a complete immunity to the madness gas.  But that didn’t expand to anyone else disturbed by the cloud, and she still needed to actually fight the crazy people in order to save them.

To the trained martial artist, handling the residence of Consequence while they were mad wasn’t a very stressful task. To save the half of the population that was still in their right state of mind, Anthem had to knock out the others, and put them each in their own individual stone cells that only opened from the outside; but this was just putting a Band-Aid on a still bleeding wound. Unfortunately, the Scion of Hellifyno didn’t know anything else that she could do for the poor Souls. Even with her skills to save a Soul from corruption like this, it wasn’t meant for a large scale use.

Anthem could also feel the city of Nevaeh Caos like a slight buzzing in the back of her head. It was ignorable for now, but the Scion knew the city of Chaos was in this realm, on her planet, and it would not hesitate to start influencing this already chaotic world. But she wasn’t ready to trek that far east, not when scores and scores of her own countrymen are threatening to destroy each other and themselves in bouts of madness.