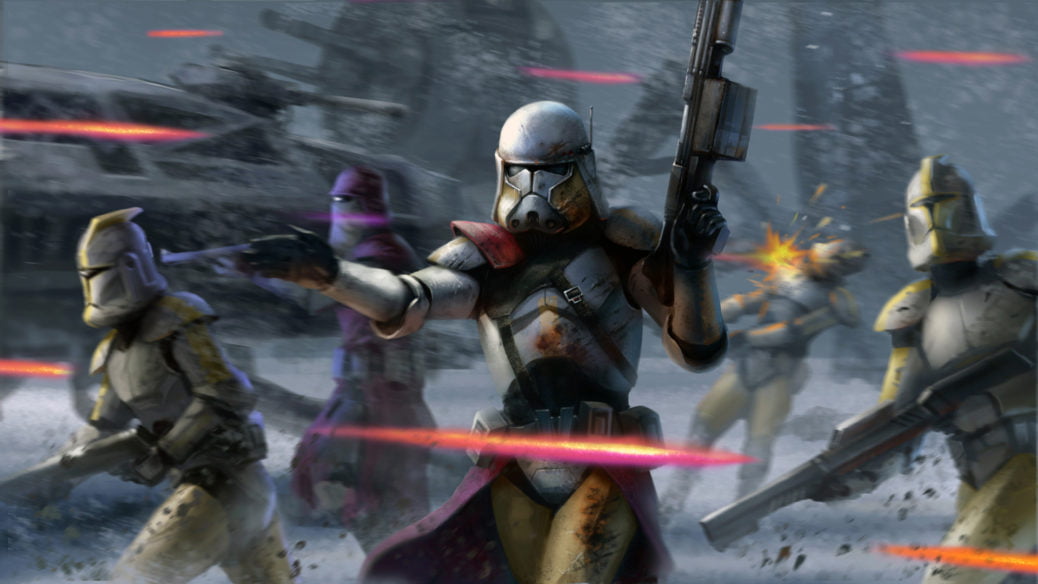 A while back, the Republic had an old outpost on the planet Rhen
Var.. Untill the Sep’s took it from us. We were going to just let it
be something we worry about later, until Jedi Masters Anakin
Skywalker and Obi-Wan Kenobi had found some form of a Force
Harvester on Raxus Prime… Still Don’t know what that is..

As it turns out, the key to the thing was on Rhen Var, and the Sep’s
wanted it for that very reason. So the Republic did what you’d
expect. They called in the 501st and the 422nd to come and take the
planet back, and keep the Sep’s from acquiring the Force Harvester.

Our specific group of the 501st were sent out to stop a Separatist
spider walker from reaching the main portion of the battle. Seemed
simple enough…
Only they didn’t say a thing about Asajj Ventress.

Vin could feel the cold in his bones… Every second of their time here on Rhen Var has been hell. Still, better than Umbara. That battle was… Something else. He had decided to bring Blight and Oculus with him, figured he might as well have his go to men with him. The rest are the one’s that were already there.. A few men of the 501st and some of the 422nd.

Oculus spends the flight over to the drop point cleaning out snow from his sniper barrel, Where as Blight boast to the other troops about his kill count. two hundred and thirty nine. If Vin was one to boast, he’d counter with two hundred and fifty seven.

After a few long moments, the LAAT gunship finnaly slows down a small bit. The pilot’s voice breaks through the clone’s helmets. “Approaching landing point Theta. All men, get ready to drop.” Vin sighs… He might as well give his men some words of encouragement, and an update on the mission..

He turns to the rest of his troopers, and begins.. “Listen up! You all know the task- we have rocket troopers ready to fire upon target alpha,” The spider walker. “While they set up, the rest of us will set up positions on checkpoint Alpha, Beta, And Delta. Delta squad will draw the walker into the line of fire of Alpha, where the rocket troopers will set up. Beta is in charge of taking out any enemy infantry that wander to Alpha. You strike when I signal you to.”

“Also keep in mind, this mission is crucial to the take over of the main tower. We keep the Sep’s busy for as long as possible, even if it means making them have to crawl over our bodies! Do you copy?”

Not long after, the LAAT would reach it’s destination… Clones pour out, each group heading to their designated areas..

As Blight arrived with the rest of Delta company, he soon realized that the whole goal of this isn’t just to take out one simple walker. It’s to take out the entire platoon of droids. These clankers make it to their target, not only do the droids at the main tower get a spider walker on their side, they also get additional reinforcements.. He spots a trooper of the 422nd looking through a pair of binoculars, keeping a close eye on the enemy.

Blight looks at the cluster of droids in the distance, and back to the 422nd clone. He asks, “What do you see?” The clone responds, “Not much.. Standard B1 battle droids and a few B2 super battle droids. Other than that? Not alot. Oh, and the spider walker.” Blight nods.. He turns and opens a com link with Vin… After afew seconds, Vin’s voice breaks through. “Anything new?” “Standard unit. You’d think there’d be at least some Destroyer Droids.” “Keep your eyes open. There might be something they’re hiding.” “Watch it be AATs.” “Watch it be Dooku. Or Ventress.” And… End of that conversation. Blight goes back to observing the droids, waiting for his signal…

Oculus was assigned with Vin on Beta company, over looking Alpha. Looking through his sniper, he can see the droids coming in… It bothers him. They’re so close, and yet Vin hasn’t given the order.. They’re not quite in Delta’s firing range, though… So it does make sense. Either way, he could have pulled the plug on plenty of these clankers by now…

Vida, the beta company’s medic, seems a bit on edge… Oculus looks over at him a moment… That clone has always looked like that, hasn’t he? On every Op they do, he’s usually the nervous one… How’d he get into the 501st? Or any legion, for that matter..?

The droids are just about in firing range of Delta… Vin hasn’t removed his eyes off them. Slowly coming closer. He grabs ahold of some binoc’s and takes a quick scan of them, to be sure there isn’t anything waiting to surprise him..

He’d quickly hand the binoculars back and open a comm link to his troops… “All men! Fall back! You know who it is…”

Alpha company had made it’s retreat half way from their last location and the tower, all ready to fire on the spider walker yet also shaking in their boots from a mix of fear and the cold… Any time a sith is involved in an Op, something bad happens. REAL bad. Fido, one of the many rocket specialist from his specific batch of clones, has been keeping track of the sith’s history in the clone wars. All of it result in clone’s deaths. He lost a good friend to a sith at one point… Savage Oppress, maybe? He didn’t get the full details.

With Vin calling for all troops to make a retreat, though… Is unexpected. Maybe he’s called in Jedi support? Or maybe something else..? Fido.. can’t tell.

Blight was tired of waiting. How much longer untill- “All clones fire now!”

Music to his ears. almost..

Blight rushes up the hill in between Delta and the target… readies his Z-6 Rotary Cannon… Otherwise known as ‘The Hammer’… And begins unloading fast firing explosive shots into the droid platoon. At first, droids would begin dropping like flies.. Then he sees something that honestly scares his usual ‘happy-go-lucky’ attitude out of him…

Assajj Ventress, the one and only woman Blight has been afraid of.. The very sight of her is something one would find fearful in general. Bald. Pure white skin. Looks like she’s dumped herself in a tub of bleach.

It gives Blight the creeps, and he’s went face to face with the mouth of a Sarlac.

Oculus could tell Blight was having fun… But the sight of ventress concerns him.. He looks over at Vin, asking, “You sure this is a good idea?” He speaks just loud enough over the blaster fire of Delta engaging with the target. Vin… Doesn’t even give Oculus a single glance… Just keeps on staring at the battle ahead…

I Remember looking up at our captain, trying to see beyond his helmet and see the features below… But some part of me already knew the fear he felt, and the anger he holds for Ventress. From what I remember, Vin had conflict with her before. He was the last survivor of a 30 man squad. Every troop around him, slaughtered. Like cattle. Only reason he survived was because he had managed himself a place to hide and cower away… I don’t blame him. I’d do the same.

As for the mission, I was concerned. We were quickly forced into a tight position. But, Vin gave the order… And I wouldn’t doubt his judgement. He’s the only reason why I survived Umbara. Or Geonosis, for that matter.

Still, we managed to take ten of those clankers for every life we lost…