Home Birth From The Ashes

Birth From The Ashes 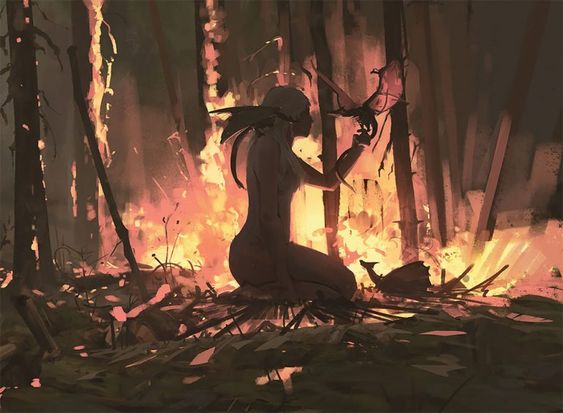 ~Warning This Story Contains Mature Descriptions as it is a story about the creation of Lyra Aeleanora Aethlu. I hope you enjoy and please feel free to leave feedback in the comments below. Also, I found it best to write with music, so feel free to read with the music down below.~

A place… A place that exists outside of time unknown to any mortal or Immortal but yet here we are talking about. Let this be a story that you remember, it not an Important one but It is an honest and truth-bearing one. What I’m about to tell you will open your eyes to something that has been right in front of you the whole time. who am I? I’m just another creation like you but if you want a name you could call me Lyra. Shhh… do you hear that? Its the start of the story, if you listen closely you will hear the truth in your own way, and if you look closer you will see.. you will see a light.

As we walk closer the light turns into a flame sourcing heat energy that could be felt planets away. the flame grows and grows until it becomes wild and untameable. that’s when you see it… the creation… that’s when you see her. her 5’2″ body was perfectly made, her breast round and full, her white hair dancing like the wildfire around, and her eyes glowed white. the female’s skin was nothing but flames as the creator was still building the women inside out. then with perfect alignment and structure, the woman’s bone came into play. they started off looking regular as any mortal but when they all were placed perfectly the bones were aligned with titan metal.

After placing the bones the female was filled with her organs in which the girl’s metal bones would protect. all of her organs and muscles were place except the heart as the creator had something planned for that and loved waking his creation up with the beating of the heart. after placing the organs and muscles, organic substances filled the girl’s body. it contained cells, DNA, and other things that made up blood and the lineament so that acid could be placed in the girl’s body which would help her eat and digest things.

the creator worked and worked, making sure the female had everything she needed. the bones, the muscles, the organs, and the female reproductive system along with other systems too.  after seeing that this was done perfectly the creator wrapped everything up with golden skin color. the fire that we once saw was gone as the female had her skin but who was to say the fire wasn’t located inside. keeping her body warmer than the average human. making her a little bit hot to touch.

Time passed and the details of the woman came in. the eyes color and things like that. After everything was made the only thing that was left was to give the creation her heart. a hooded figure came into play and walked to the female who had been created so beautifully.  with great power, the hooded figure walked forward with a crystal heart in hand. “My beautiful creation is time for you to wake up. it time for you to rise to a calling… a position I’ve created you for.” the hooded figure said as it stood in front of the creation. in a couple of moments, the heart was placed into the woman’s chest and slowly it started to beat…