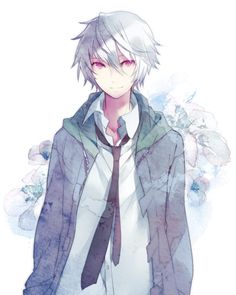 Blake is Sai’s Butler and along with Rosa one of the very few non-vampires in the whole mansion among the siblings besides Sai obviously he finds himself probably closer to Keiko or Zephyr as there personalities pretty much allign.

Eye color: Pale grayish black because he is colorblind

Demon form: Appears as a rather large white wolf with strange markings in his furr. He can appear with a White tail and two white ears in his human form but normally he prefers not to.

Personality: Serious, can be a little cold unless spoken to in which case he will be more friendly, overall has a very mature way of looking at things perhaps due to his old age or someone else in his life.

Family: As far as he knows they are dead.

Weapons: Swords/Daggers and a few other things.

Abilities: Magic which he primarily learned from Sai

Compared to a human he will be much stronger both in terms of stamina and in terms of overall strength.

He’s an old character from the old site I never got around to posting on here so yeah feel free to rp with him again.