Home Cavewoman IN SPACE – On Planet 2

Cavewoman IN SPACE – On Planet 2 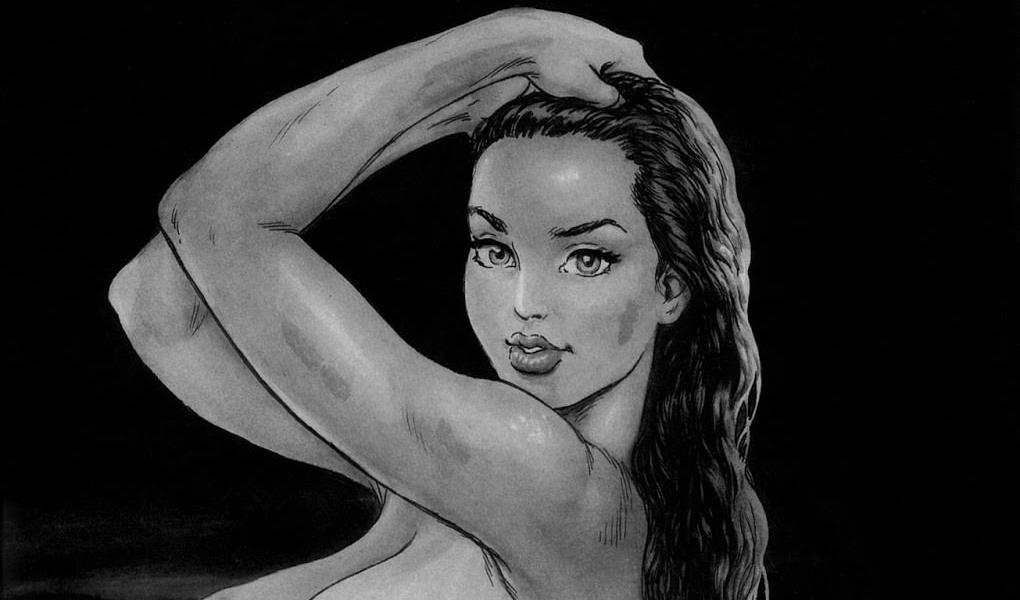 Tumbling, tumbling, falling, falling, that’s what she was. Falling without going anywhere, hands clamped over her mouth to hold the air in as she only saw blackness… and then a gigantic round… something. And then darkness again. And then the round thing, bigger than anything should be, the size of a whole world… And then darkness. And then lack of air was replaced with sweet, sweet air, and also thick, thick mud and water. So much of it in fact that she actually struggled to move her arms through it all. She grasped for something, anything solid, and couldn’t find it! She’d struggled with muck like this before, and if she fought too much, she’d just die. She had to be smart. She let herself relax, and then slowly tried to get her body parallel with the sinking mud she was in. Soon she was floating as much as she could float, and could start raising her legs, her arms, and then the rest of her body until she was in fact on top of the muck, floating on her back, and greedily sucking in air, sweet, sweet air! The rest was easy enough; she took in another breath of air, and then slowly, carefully rolled over and over again to her right until she was on more solid ground, crawling on the ground. And then? She laughed. Of course she laughed! She’d lived! She survived! Take THAT, Mother Nature!

Now that she was on the ground, Meriem looked around. The air… It was thick, hot, stuffy. Beyond stuffy, really; it was almost like trying to breathe in syrup. “Where… where am I now?” Confusion swirled around her in more ways than one as she stood up and weakly stumbled around. Strength had fled from her body the first time this happened… Something about being flung somewhere so cold, and then literally hitting strange new lands was enough to knock the wind out of anybody. Before, it had just been sand… But what was this… this swamp? Once more, Meriem found herself on another world entirely – the second planet from this sun. More than confusion was swirling around in her mind now, as she trudged on, and more than strength came to her muscles. There was a… fire. A power. She stopped for a moment, staring at her hands, clenching fists over and over again… Over and over… Over and over. Hands… Hands… Skin… Mud… Hands… She was still smiling from cheating death by sinking mud again, or was she smiling because her hands were so… hand-y? Hands-y. Hand-like. Fingers. “Fiiiiiingers…”

Fingers were so fingery, weren’t they? Like long sausages that didn’t look like good sausages you’d want to eat, especially since they were all muddy. And they were so finger-like, too, weren’t they, these unappetizing sausages that bent at weird bony hinges? Super weird. And they… were tingly. She touched them together, and it was like fireworks. “Ooooh…” Lights! Lights that weren’t lights! The hands had to get in on this! She pressed her palms together and BAM! An explosion of lights! Lights that weren’t just lights, but like… things. Thing-things, in the skin, in the muscle, in the nerve, like heat and cold, all mixed together in swirling waves that went up her arms, up her neck, into her head… and into her hair. “Oh…” She tilted her head back, eyes closed, and just felt the colors and the… feelings! That’s what the thing-things were! Nice feelings. The best feelings.

Muddy fingers ran through her muddy hair. Hair! It was like strings of fire, wet, dirty fire! She tossed her head around, feeling the weight of it slapping against her back, adding to the explosions. She spun around, arms stretched out, raising them high and low, feet kicking, head swinging around. She moved with such speed and intensity, and yet it all felt so slow, so smooth, like swimming, like she was still in the muck of the swamp, but in the thick air instead. She could BREATHE in, deep, greedily, and feel this take her more and more. Soon, mud that had stuck to her was flung off just from how rapidly she moved, no matter how slowly and amazing it felt. She also didn’t know that she was… screaming. And laughing. But mostly screaming. Not awful screams, just happy screams. Like a child at play, but instead of a child, it was a full grown woman.

What followed was… quite a sight. A woman stomping and splashing and running through a swamp, her arms either held out like she was trying to take flight like a bird, or tangled in her hair or running over her body as she twirled, jumped, cartwheeled, dove into the muck, and swam like a dolphin… or, in reality, for the last thing, she belly flopped on the wet ground and ‘swam’ in place.