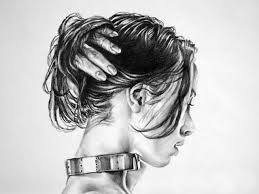 Mind numbing pain slowly ebbs as she whispers to Eryth that she would do as he commands. His fingers stay tightly pressed into her shoulders, his breath still hot against her ear. She swallows hard, her throat dry and brittle. The pain does not completely leave. Eryth, is no doubt, making sure she does as she is told. He holds the power of her own will through the wrist and neck brace that enslaves her. The repeated echo of his voice bounces inside her mind, over and over again. Do It! Do It! And she could feel something ‘snap’ inside her.

When her eyes reopen, there are no pupils. In their entirety, they look nothing more than a glassy gold, glinting the reflective light of the sun above the waters and the flames starting to grow all around the fleeing occupants of the large ship. Her face is expressionless. All remnants of pain firmly dismissed. Her head gently inclines, turning slightly to the side to look at Eryth from the corner of her mirrored orbs. She hears nothing now. She blocks him from her mind. How, she is unable to define. Everything feels as if it is moving in slow motion. Even as her hand lifts and places over one of Eryths, his fingers nearly breaking the surface of her skin, it feels like she is in a dreamscape.

Only a thought. A flicker of a thought. Her hand over his erupts in a hot white fire. He, being a strong fire elemental himself, does not flinch back at first. However, he starts to frown down at the heat he suddenly realizes is building. There is confusion in his eyes, mixed in with his anger. Mira feels that familiar tingle. No, another dose of pain he sends in response to her. She throws it to the back of her mind. Tapping into a bastion of strength she thought she had expended already. Feed the hate, the anger, the betrayal, the insanity of having to be a slave to ANYONE for even one more second.

“Mira…! What..?!” Eryth gasps out before he suddenly wrenches both his hands away.

The heat is so great, the metal below her bare feet of the deck begins to soften, toes miring down just a small bit as if she were stepping through soft mud. Eryth begins to back away from her, though not before his own flames burst to life along his body in defense. Waves of thermals glimmer across her body. Giving the appearance that she might be a mirage in the highest heat of the desert sands. The once tanned skin is slowly turning paler with the white heat. Those that are fleeing or fighting around them, have to give them a very large birth, as the heat emanates outwards, enough to singe hair and scold the skin into blisters, as far as a 30 foot radius.

Eryth struggles to fight back Mira’s fire. But he soon learns that it is beating him back. The anger twists in his face as she stares him down. Quietly stalking closer to him as he tries to move away. Arms fall to her sides, palms facing outwards with fingers gently splayed. The dress that was once a simple cotton fabric, is all but burned away from her body. Fluttering ashes rising upon the air, away from the heat and out to sea. But as her skin burns whiter, it is near impossible to define her nakedness. Another wave of pain is dealt her. Not once does she blink an eyelash. Eryth pauses, his chest rising and falling in what Mira can see is panic. The flames still roll along his skin, eating away at his own clothes. They were far more flame resistant than Mira’s simple attire. He bares his teeth at her briefly. He is having trouble understanding how Mira is able to defy him and his commands, as the brace is still tightly around her neck.

“Stop, Mira!” He commands, though much weaker than his past orders.

“No.” Her voice is hollow. Without any emotion touching her inflection, though they all warred inside her.

“No.” Simply she answers.

Eryth’s eyes finally go wide. Astonished. Then they squint down into slits, for looking straight at Mira with such radiating light finally takes it’s toll. The flames on his skin suddenly evaporate into the air. He gasps heavily, like the air is taken out of his lungs. His tongue flicks along his lips and he shades his eyes with an arm. Mira feels the pain completely lift from her body. And it only frees her attentions to make her flames grow higher and more vicious.

“Release me.” She commands. “and I MIGHT let you live.” There is anger that hints into her voice.

There is only a moment of hesitation on his face. But he quickly presses his fingers against the wrist brace, a command being said below a whisper and lets it fall heavily away to thunk against the softened metal beneath him. The neck brace around Mira’s neck audibly ‘clicks’ loose, amidst all the noise swirling around them. Eryth’s jaw tenses as he feels his back press into one of the ship railings. He feels it bend slightly, the heat so intense, it is already starting to melt at Mira’s bidding. Mira barely watches the wrist brace, her hand rising to deftly catch the neck bracer when it falls against her chest. There is a quick intake of breath. Free breath.

Before Eryth could even anticipate Mira’s movements, she moves towards him, landing a very hard blow to his head with the bracer in her hand. The sound of the metal connecting with flesh is lost upon her. Instead, she watches his body crumple first against the railing and then down upon the floor. Out cold, with residual smoke lifting from his body where flames once lived. Moving fast, she bends alongside his body, reaching down to his neck with the bracer. There is a moment she pauses…feeling that sick twist in her stomach. Shaking her head, she talks herself out of having any mercy for this man. The bracer clicks in place. Retrieving the wrist brace, she holds it in her hand tightly. Not yet putting it on.

Lifting from the ground, she suddenly lurches forwards against her will. Blinking in confusion, she looks behind her to see who could have possibly approached her to push her so. But there is no one there. Looking to her shoulder, she feels a new type of pain. Blood oozes out, but does not live long in moisture with so much heat residing around her. It boils quickly and then dries away, but not before another lurch to her body, and another, impact her. The sound of guns echoing finally register in her mind. Bullets have just pierced her body. One in her thigh, another in her abdomen. A gasp. A quick moan of pain. More bullets start to fly. Refocusing her sights, she strains against exploding those bullets mere inches from her body. Her hand flies to another that gets past her concentration. Extremely close to her heart. Puncturing her lung. Staggering back, she gulps for air. Vaguely, all around her, she can see there are many bodies laying dead, very few slaves having stayed for the intense heat she had created, or the chance of being enslaved once more.

Mira feels the heat slipping. Her body begins to release her hold on what feels is her max ability. Pupils begin to flicker back into existence as she tries to focus her gaze. Norrin. She can still hear him and Gent, off in the distance, still fighting and trying to make their way to her. Looking up towards the decks that look down upon the platform, she sees a few scant guards, guns aimed and firing off towards her and her companions. Mustering her strength again, she lifts a hand to her lips, breathing a wisp of flame into her palm and sending it hurtling to two of the guards who were shooting at Norrin. Before she can make sure the targets are aflame, she turns her gaze to the last man that has his gun trained on her. He unloads the magazine upon her. Another leg entry, forearm and stomach. They rip through her skin, with difficulty, as the thermals helped to slightly slow their deadly progress. But the damage is done. She is having trouble breathing now. A few more steps send her backwards, her last expenditure of her energy being sent to set that last guard on fire. The force of which she sends it, also sends her over the softened metal of the railing. A grunt of pain sounds in the quieted air as she falls several hundred feet to the water below.

As soon as her body is submerged, a pluming cloud of sizzling steam rises into the air. She gags against the cold water, trying to both breath and cry out in pain against her many wounds. Her limbs are too slow to move, too hard for her body to maneuver the heavy, roiling waves of the salty sea. Air bubbles escape her lips as she sinks lower. After only a few moments, Mira stills.

Why fight? Her revenge had been justly given. She had lost everything. Lost Him. Lost a majority of her people. She could just stop struggling, even as she feels the wounds slowly pushing out the bullets from her flesh. Another gift, from Him. It may not be near as strong as the full ability to regenerate as quickly, but it was burning in the salt water with healing.

She could die now. Leave the cruel world that took everything away.

How strange it is, death. It feels like an arm gently looping from behind, allowing her body to rest against something solid and sure. Letting herself go limp, eyes closing against the blurry dark abyss.

That familiar face. Coming into view behind her eyelids. Touching at her unconciousness, so soft and loving. Enveloped in strong, comforting, warm arms. The only place she had ever felt safe.

Water splashes against her face, air is suddenly filling her punctured lungs. Each breath is excruciating, the salt stinging her out of her silent reverie. A wet, choking cough issues forth and her body begins to respond. There is still an arm looped around her and she can feel someone elses legs kicking against the water. Popping her eyes open, she stares up at the mid morning sun, blazing down upon her as she floats upon her back.

“Breathe, Mira!” Norrin urges with his own struggled breathes at her neck.

Spitting out water, she coughs again, leaning her head back as her hands clutch to Norrin’s forearm across her shoulders. And somehow, the wrist brace is still clutched in her fingers.

“No…” She whimpers weakly, tears stinging at her eyes. “I’m done…..please….!” But she is not sure Norrin can even hear her. There are voices she can barely hear from above her. She is completely spent. Her whole body aches with every small movement. There is no fighting against Norrin having jumped in the water after her to drag her from drowning.

The words repeat over and over in her head, her vocal cords too sore and raw to speak them. And with each passing moment, she starts to struggle against Norrin pulling her back to the ship. The bullet wounds feel as though they have sealed, the fluid in her lungs dissipating, lending a meek punch of strength. Their approach to the ship slows as Norrin roughly takes Mira’s chin into his free hand, turning her eyes to him. Not thinking, she meets his gaze ruefully. And in an instant, her world freezes. Her body goes limp and Norrin releases her chin to continue pulling her along. Paralyzed.