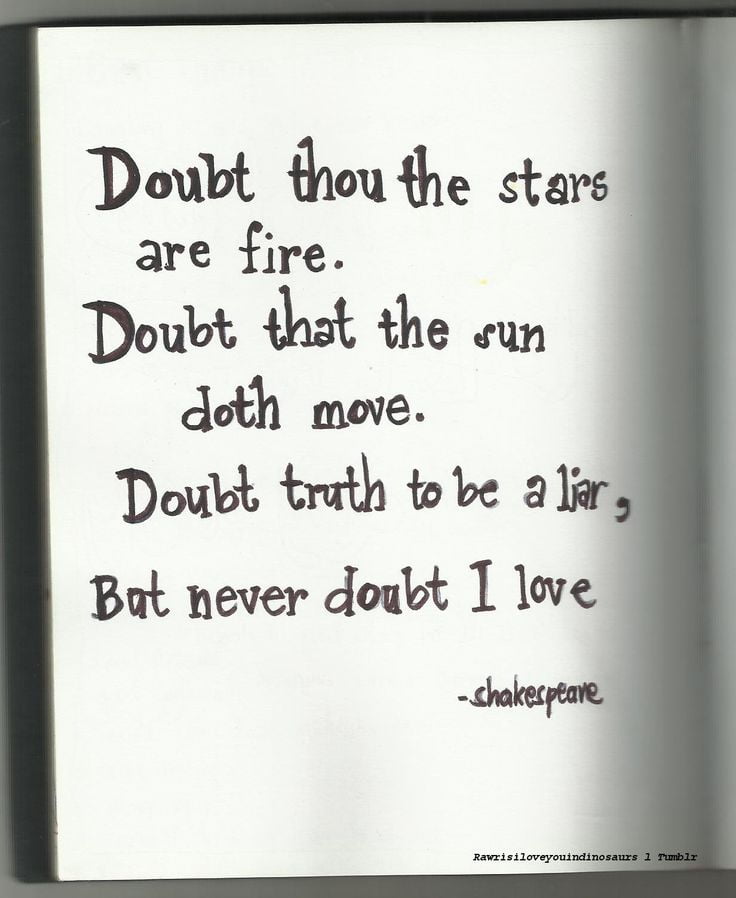 At sixteen years old, Hamlet had all the elegance and grace of a fawn skittering on a frozen lake. His limbs had started growing, relatively long and lanky to his short frame, and he had no notion of precisely where they were or how to completely contain them. The slightest gesture usually ended in him knocking against someone or something and a flurried apology. As for physical exertions, Hamlet knew the limits of his current body and mental map of it, and avoided them entirely.

That is, with the exception of fencing.

The man let up, sliding his parrying dagger back in his belt and reaching out for Hamlet’s hand. “The more prudent man would have evaded such a grip,” he said, taking the youth’s hand and shaking it firmly. “Thou wouldst likewise find it better to improve the control of the steel. Dost thou wish to attack the air near me? As for the footwork, minimize the steps taken.”

Thou. Hamlet’s mouth twisted distastefully. Still, at sixteen one could not expect much more. “I’ll catch my foot on itself in smaller steps. Wouldst thou have me scuttle along crablike?”

“Nay, my lord.” Ah, so he was still ‘my lord’ outside of critiques. Hamlet was pleased. “Next time we are to practice, I will not strike at thee, but watch thy feet.”

“Fine, fine.” Hamlet nodded a bit at him, and gave him a rather bright smile. “Sir, do me the honor of bestowing one compliment upon me?”

The instructor gave Hamlet a very brief smile. “From the beginning of this undertaking, thou hast done marvellously well for the practice of only two weeks. And I am sure that the Lady Ophelia saw naught wrong.”

“Ophelia!” Hamlet looked around wildly for her, and spied the young woman standing against the door frame, her red hair cascading over her shoulders. She gave him a little smile–a modest one, of course, for a lady makes little other kind of smile, even when she’s but sixteen. “Ophelia, why, how long stood thee there?” He was already moving to unbuckle his sword and dagger from his belt, passing them both to his instructor. “I’ll set hold on the remainder of the lesson, mark it,” he told the man swiftly and ran to the girl.

He took her arm and the pair promptly turned from the practice room.

“Why, of course, well played. ‘Tis such a necessary skill I’d never permit myself to slack in it, as though I’m some poor actor who learned by rote for one performance and let all matter and art slip the moment he were given his lines for the next.” Hamlet grinned. “You have a brother well skilled in that art, Ophelia?”

The corridor they were walking was vast and cold, colonnades standing in sentry rows. It was open to the air. It was cold for April, and Hamlet leaned down over the parapet of the corridor to pluck flowers from the greenery growing up against it.

“I did think so,” Hamlet said swiftly, undeterred by her reticence. “I’d play against him, right enough. I’d set my mind to it and catch him at disadvantage!”

“He is older than you, my lord,” Ophelia observed politely. And her implication stood true: that Hamlet, in all his colt-like grace and abrupt youthful movements, could hardly stand a chance against Laertes and his controlled discipline.

“My mind’s older than the body; we fence with the mind. He’d beat me at wrestling or grappling, of course,” Hamlet added swiftly, wishing to add humility to his list of positive attributes.

“Perhaps your mind is so old as to be in its senility, my lord,” Ophelia mentioned with the barest hint of a smile around her lips.

“How now!” Hamlet laughed, grinning at her. “Never so! Why, I have the soldier’s sword, the courtier’s eye, the scholar’s…” He gave her a meaningful look, eyes tracing over her. “…tongue.”

She was utterly silent, though her eyes seemed to gleam, and her face reddened.

“Thou art already quite in color with these!” Hamlet glanced at the red blooms of the flowers he’d picked, and held them out to Ophelia. “They match thee so excellently in hue, twould be a shame to withhold them. So take these, here, Ophelia.”

She took them from him gently, pressing them under her nose to breathe in their scent. “My lord, I thank you.” She tilted her head at him. “I must away now, my lord, I know my father wishes for me.”

Hamlet was certain she knew no such thing, but he was utterly pleased she was maintaining her modesty. “Ah, then get thee hence. Thanks for watching my fencing.”

“I always try to watch your fencing, my lord,” Ophelia told him, and she turned and made her way back along the corridor.

Hamlet nearly laughed out loud the moment she was gone, in utter glee. “She watches my fencing!” he said brightly, and turned himself to walk the other direction. “Ah, nymph, I’ll see you in my dreams tonight,” he murmured, as if already to the departed Ophelia.

Talking with Ophelia was like speaking into a void that appeared barely to listen and yet politely understood everything. Looking upon Ophelia was like regarding man made out of clay, or in her case porcelain. She had sparks of intelligence in her eyes that she felt herself too modest to give voice to. Sex with Ophelia was at the moment nothing more than a flurried imagination, breathy gasps, and the heat of his own hand.

He knew he would marry her one day.

Four years and some months later, the perpetually nineteen Hamlet had gained a greater skill and grace in fencing and his movements, and lost everything else.

He woke up from his memories late at night, his heart aching. The courtier’s, scholar’s, soldier’s, eye, tongue, sword….what a noble mind is here overthrown. And he’d gained back those faculties, and he had replacements for nearly all that he’d lost from that sixteen year old world.

“She’d had such a mind,” he said softly to himself. “Poor girl. She feeds maggots now.”

He rolled over a little, nudging at the shoulder of the man who lay next to him. “Hey,” he said quietly, the modern affectation sounding strange in his voice. “Hey. Hey, Matty.”

The man wasn’t awake and didn’t respond. Still, a sleepy arm slid out to draw Hamlet closer to the warm heat of his body.

He breathed out at the embrace, resting his head on Matt’s chest to listen to the man’s slow, steady heartbeat. Hamlet wondered if sometimes he dreamed of Elektra. He wondered if it was hypocritical to be jealous if he did.

He felt unconscious arms tighten around him.