Home Death At Your Door

Death At Your Door 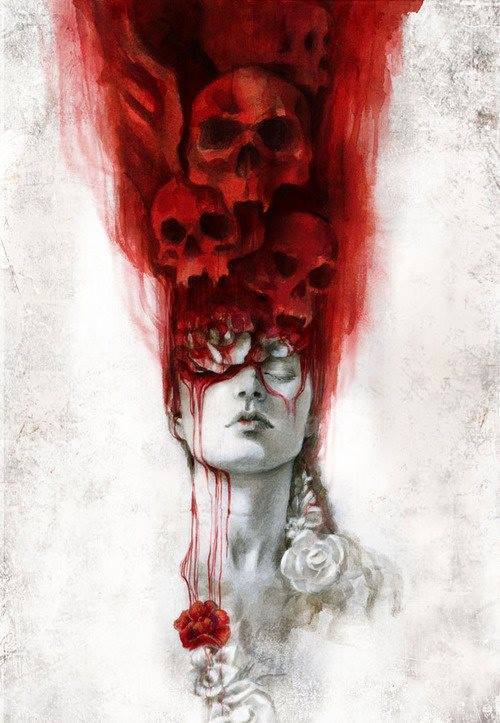 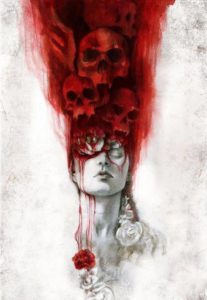 She knew he would try to run… many did. She watched the man turn and run for the back door. A dark grin forming over those plump red lips of hers as she slipped into the shadows and stepped out before him in the alley behind his home. Her heels clicked on the hard ground the only warning he got before that small delicate hand of hers reached out to grab him. Not a word was muttered no chance given for him to beg. Her claws sunk deep into the front of his throat gripping his windpipe her fingers curling all of the way around it before ripping it out in one pull. She stood there and watched as shock filled his vibrant green eyes. Blood splattered across her chest blending in well with the red silk of her shirt but the blood that hit her face stood out bright against her porcelain skin. Her silver glowing eyes gleamed as she watched the blood leak from his neck down his chest. The man fell to his knees before her as she simply watched the light go out in his eyes before he collapsed fighting for one final breath.

‘You shouldn’t of ran’

She purred out as she dropped the bloody flesh, tendons and muscle that was still held in her hand. With a slight sigh she knelt down placing a single hand over his chest allowing it to hover for just a moment before she began to call to his soul. It did not fight or struggle as she cut the ties to the body. The soul was claimed as her own and knew there was no escape.

She turned back into the shadows with one thing held in her mind. His precious family. What he gave everything up for… they would now join him in death. She handed the soul to a passing reaper before she stepped out of the shadows behind his wife covered in her husbands blood she was behind her a fist in the woman’s long chocolate hair pulling her head to the side, an arm wrapped around the woman’s waist to hold the woman still and hard against her chest within a single breath. Her head dipped and her teeth sank into the woman’s neck. A whimper escaped the woman’s lips at the shock of it all. Feeling her struggle with every deep drink she took from her neck. It was pointless to struggle it would simply causing the woman to die faster… but she did like to feel that fight slowly fail as the body went limp and dropped to the floor with a thud. She could hear a heartbeat within the next room. Quicker than some but steady… a little girl. Their child…..

This has been her last couple of days. Death was collecting and no one could escape.