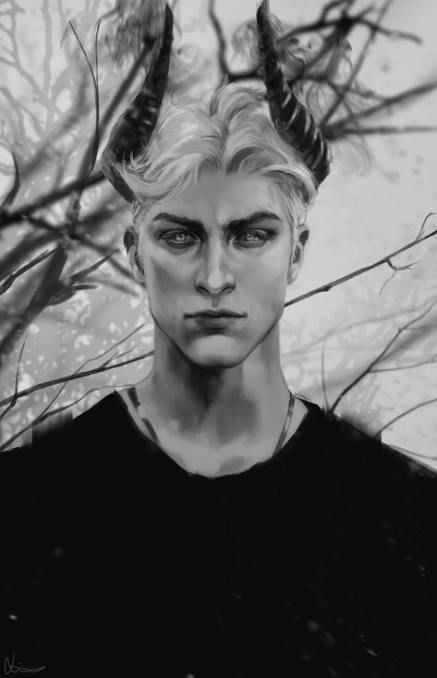 Eva giggled as Lucky started to lead her to the rooms upstairs. But then a large man stepped in front of them. He was taller even than Eva with horns atop his head. His icy cold green eyes held a hint of laughter and his silver hair was immaculate. Eva waggled her fingers and said. “Hiya Cyprian.”

The man ignored her for the moment to speak to Lucky. “I am here to collect her. You have my word, she will not be harmed.” Reaching out, he grasped Eva and threw her easily over his shoulder. The girl was now staring at his ass and could not resist a small poke. Surprise showed in his eyes for an instant before they widened and he cleared his throat before bidding farewell to Lucky and striding into the waiting portal of Hellfire.

“Do you know,” Eva said as they walked toward her father’s throne room. “You have a cute ass? It jiggles a bit when you walk.” Then she made some weird ass jiggling sounds before bursting into laughter.

“And you, little Angel, are drunk.” He said firmly, though there was a wicked grin on his face. He reached up and slapped her ass, drawing a yelp from Eva. “I do not know why you asked for father to tame your flames. It weakens you. What would have happened if you had been attacked? Or someone you cared for there was attacked?” There was no accusation in his voice, but there was an edge of concern.

“There are many more there that are powerful.” She whispered, resting her elbow against his ass and her chin in her palm.

“Aye, but what if they were hurt or distracted?”

“Okay okay, you’ve made your point.” Eva muttered. “But in all honesty, Cy, I just needed to forget.” She explained about the date she had ruined. The lack of trust, or rather Naos’ trust issues that had pushed her to step away and then the Saiyan’s comment about not fucking her. “Dude, I didn’t even ask!” She had completely misunderstood his meaning of course but she ignored that fact. “I am going to end up alone for the rest of my life.” She said quietly. They both knew just how long that could end up being. She was already six hundred and fifty years old. “I don’t want that. My bed feels empty and I am… I am lonely.”

They had reached the throne room and Cyprian set her onto the seat with a sigh. Crouching before her, he cupped her face about to speak. But the moment his hands touched her skin, he frowned. “You are frozen…”

Concern flared in his eyes and he removed his long jacket. Then, he moved her, sitting himself in the throne, something he would never have done in his long life and set her in his lap. The jacket was then draped around her and he stoked his internal fires a touch, raising his own temperature. Slowly Eva relaxed in his arms, her eyes closed as she simply passed out. He sat there with her, holding her as she slept, ensuring she was warm. It never occurred to him that Vergil never arrived.

Vergil had reached his door in time to hear eva explain her night and her loneliness. Then, as he watched, his Captain held her close and the man sighed heavily. He had been hoping to avoid this. He had seen the connection a long time ago but had hoped it would ebb. Shaking his head, he moved away from the throne room, allowing them both the night. He knew Cyprian would do nothing more to earn his ire. He would be punished of course for sitting on his throne.