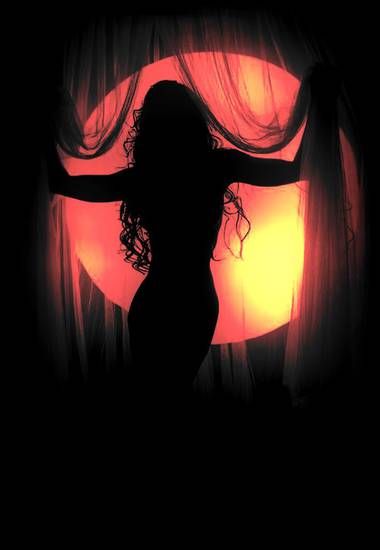 His hands smoothly run down her shoulders, strong yet so gentle, as if he were touching a rare and fragile silk. It was enough to beckon a fluster of goosebumps, tantalizing and distinct over her flesh.

A breathy sigh of willing surrender leaves her lips. Lashes flutter a moment before finally closing her eyes, letting the scent, the touch, the mere closeness of him overtake her completely.

His head leans down, lips teasingly kissing at her neck. Painstakingly, yet wondrously alluring, those kisses move to her clavicle. It continues on, lower still. There is a catch in her throat, a gasp that follows swiftly and that familiar heat of a flush to her cheeks.

Her eyes snap open. Her body is nearly drenched in a cold sweat. Abruptly, she lifts her head and torso up off the blanket she had laid out upon the hard ground.

Blinking incredulously, her head swivels in either direction. Where did he go?! He was just here! Taking her in his arms-the promise of keeping the evil world at bay in that one embrace. Swallowing hard, she realizes she is parched. There is the faint smell of smoldering embers from her blanket. Looking down, she now sees the small plumes of smoke. Wiping away any remaining flames, Mira looks up in confusion and utter physical frustration.

“Mooooourning.” Eryth says, a knowing and smug look upon his face as he sits cross legged on his own blanket several feet away from her.

“Do you always set your bed on fire when dreaming? Must have been a good one. You were sighing quite provocatively!”

If she were able to show the flush in her tanned skin, it would be bright and humming! She lets him get the better of her, though, as she swiftly scoops up a desert rock and hurls it at him. It isnt until the rock already left her hand that she realizes she could have just as easily ‘thought’ of sending him a bout of pain through his collar rather than exert too much energy.

So it is with extra ire that she scowls at Eryth as he reflexively catches the rock out of the air as if he were plucking a ripe apple. He makes an annoying ‘tsk tsk’ noise and inspects the rock before dropping it back to the ground.

“Enough!” She hisses at him.

He sighs irritably. Wiping his hand upon his pants, he gives a shake of his head. His eyes flicker over the ruby she wears upon her right hand ring finger. His tongue runs along the inside of his lips.

“You just dont let it go, huh?” He asks seriously.

“What are you talking about?” She doesn’t really want an answer.

She wanted to slip back into that dream. Back to where her memories came easier from her subconscious. So vivid and real at times. It now leaves an aching longing that wrenches down to her very bones. She hugs herself tightly, despite how it may make her look vulnerable to Eryth.

“Forget it.” He replies with a hallow tone.

She is thankful he chooses to leave off tormenting her, for now. Though she put up a brave and unfazed face at his many barbs, it still stings, constantly knowing the depths of what you lost.

Looking over her shoulder to the rising sun, she sucks in the morning air, if only to keep from tearing up. She stands, shaking out her blanket and beginning to fold it up.

“Get up. It’s a long day ahead.” She says tersely.