Home Heavy is the Crown

Heavy is the Crown 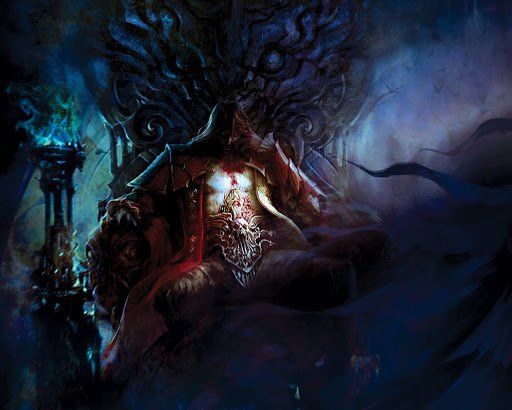 The throne room lay dark as Cheshire rested within the seat of power. Its darkened iron and wood rising high over him like a shadow as he rested his chin against the knuckle of his hand. Things had not gone well as of late and he was beginning to feel it. The strain of Azgaura and Azura was weighing heavily on his mind. So much had been given to bring those two here. So much power that he had not meant to give. Whats more? The attack on Twine and its descimation had left him with nowhere left to run. No place in which to seek true solitude. All he had left was the princedom that he had raised. A city of the void. A haven for the outcast and alone. Yet even within this place.

This refuge for those like him, he felt nothing. These were his people. For ten years he had been with them, watched them, guided them and protected them within the void. For a decade he built them up. For ten long years he had walked amongst them. Yet still he felt removed. He was not like them. They offered him no comfort in their company. Little joy in conversation. Often they merely hung on his words and did as he decided. This was not what he wanted. It was why he had taken the title of Prince rather than king. He never wanted to be in full control, yet here he was. Sitting in a throne with a city at his command. The weight of the crown was heavy. Helping to further agitate his already fractured mind.

The nightmares made it no easier. The voices had returned. Whispering and gnawing at his psyche. Dreams and visions of terrors long since past. Lives that were not his to live. The swirling dark and red. The eyes of madness that gazed down upon him, forever watching, waiting for him to slip. Waiting for the cracks to grow larger and larger so that it may slip into the waking world. Perhaps it would be better if he simply wandered into the void? If he traveled to the deepest recesses and just allowed the dark to overtake him as he passed peacefully into sweet oblivion. What was there for him here? What joy had he left? He shook his head. Knocking over a glass of wine from the side table on his throne. What joy was there?

A large sigh was given. There was one thing. Magicica had returned. An old face that brought hope and interest to him. Still, she seemed different than she had been before. The playful madness replaced by an almost child like cruelty just beneath the surface. Such a change that Cheshire himself could not help but wonder what HAD happened. Even if he had not the courage to pry. From the stories, her powers of the mind and imagination were comparable to his own. Yet he had unleashed her upon his citizens. Gave her access to them as a humane feeding ground. Granted, he had strictly prohibited her killing them, still. His only regret was that he regret nothing of that decision.

Then there was Azura. The small savage with the broken mind. So quick to help others when she herself needed so much help. A naivety that brought a small smile and chuckle to his lips. Would it be hypocritical of him to tell her not to get involved? She seemed to care and to trust so easily and Cheshire had betrayed that trust by bringing those two into the world. He’d spoken to them. Met with them and spoken at length. He could simply banish them back into the depths of her mind. Lock them away and provided an easier rout towards dealing with them. So why didnt he? It was his own cruelty that stopped him. The entertainment that such an adventure provided him even. Watching Azura crawl to gather allies to face such things. Perhaps she would realize that she was not as alone as she thought. Perhaps Cheshire was not as alone as he thought?

He shook his head, standing and moving towards the balcony of the throne room and looking over the city. HIS city. Thoughts of Faltering Bright made its way into his mind. Her and those damned nuns that swarmed speaking of sin and purification. He wondered if they would make their way here? No, probably not. Nihilheim was a city of Void Touched, yes, but it was far from the power centers that were the other cities. Still, he couldnt help but wonder how safe his people were. Even if he had released what they had started calling “The Nightmare Plague” upon them, he still cared for their safety. They depended on him. Looked to him for guidance and protection. What sort of ruler would he be if he let them down? With a heavy sigh he gazed over the lights as they flickered in the night. With an empty heart he made the decision. He had a duty. A duty to them more than any. Folding arms behind his back he gave a small nod. Even if he did not believe himself to be the proper ruler they deserved, he would still try. He would still keep up the aesthetic. After all, he was nothing if not a fanatic for aesthetic.

Returning to his throne, he took his spot once more. “Prepare the guard” He muttered to the shadows. His voice carrying to those that needed to hear it. “Anyone who so much as vocalizes a fetish for nuns have brought to the dungeons.” What was he thinking? What was he preparing? Would he give his armies to the defense of the world? Perhaps, though a different idea came to mind. “It is time that we made ourselves more outwardly known to the rest of the world. Send Xartros to the world and spread the world. The void will not win this war but it will assist.” A flash of golden eyes. Somewhere within Nihilheim someone was getting ready for something. A missionary quest of his own. The word of the void would spread and Nihilheim would become its mecca. Its defender. He had already helped to save the world once and now he would do so again. His eyes closed. The choir of whispers slowly returning. He didnt fight against them this time. He didnt have the energy. Instead, he simply listened and let them drift him off to sleep.