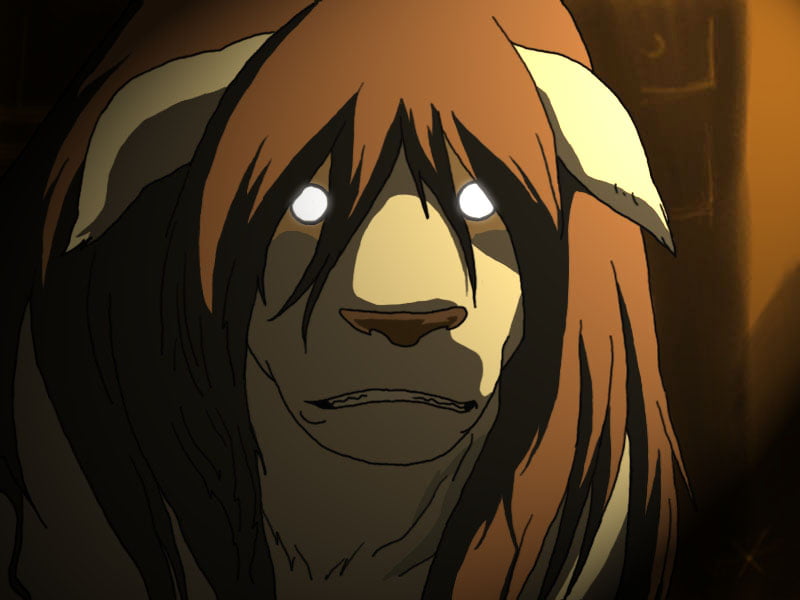 The drawl of night has finally come to an end in Consequence, light showering over the early morning dew that has turned to frost with plummeting temperatures, temperatures that continue without snow fall, at least for now. In the early hours of morn, there is a buzz of activity that seeps through the air and its people, people that are blended with refugee and citizen alike. Near the tavern, a few bikers zoom by, the streets not quite as packed in the early morning hours as some. Behind it, a little girl and her dog play fetch.

The little girl, a mop of messy brunette hair atop her head, is not quite as old as one might think from her stature and the large white dog she’s playing with races through the tall grass leading to the Nymph forest with a reckless abandonment, eyes wide with energy and love for the girl who it quickly returns its chosen toy, a stick she’d picked up from the ground, back to her, drool coating its length.

A bird above chirps loudly, overlooking the scene with a cant of its head, beady black eyes watching as if enraptured by the duo. When the girl rears back her arm to throw the stick, a bubbling laughter trembles from her lips and she throws it farther than she has before. With a loud, almost obnoxious bark, the dog charges the woods, disappears into it’s darkness. Silence ensues.. countless seconds ticking by while the girl waits with baited breath for her dog to return. Seconds that turn into minutes. Minutes that dribble on into what feels like an eternity to her. “Macy? Macy come back,” she shouts, her voice hesitant and fearful for a moment. Her voice echoes into the darkness of the woods, loud and eager.

Nothing, not a peep, responds from the wood’s edge.

All of a sudden, there’s a very loud yelp and a startling cry that flees from the woods, a struggle of shifting, dead leaves and broken branches. Scared, the girl darts into the woods, brown eyes terrified and her dog’s name loud upon her lips.

She manages to make it several thousand yards into the thick lay out of land, behind bush and bramble, into the darkness that envelops around her like a sickening vice. She still can’t see her dog, though. Silence beckons back at her calls, merciless to the fears that claim her little mind. She takes another step, hand catching on a branch before she slows her steps and then calls out once more. “Macy? Where are you? This isn’t funny,” as if the dog could speak to her, as if the dog was playing a joke on her and was just in the distance behind one of the trees.

There! She can see something moving, the shivering of a bush shifting and stirring, the loud crunch of something moving around on leaves up ahead. Eager to see her friend once more, the little girl charges ahead, branches and bramble stinging against her face as she runs through them, their sharp edges cutting into her tiny face. And then she trips, silly little girl, and goes sprawling close to the bush she’d seen moving. She lands with a skidding halt against the ground, abrasive dirt and gravel and rock eating at the flesh of her hands only to groan as she gets a mouthful of dirt that she spits out, tugging and pulling at her shirt to ‘lick’ it away at the cloth.

The shuffling of crackling leaves catches her attention once more and she quickly turns to look, only what she sees has her eyes opening wide and a gurgle of pain pressing between her lips. Yes, it’s her friend… only something’s wrong.

The look in her dog’s eyes, the look in Macy’s wide eyes, is one of terror as the dog peers back at her owner, her body caught in the vice of a giant green enemy, a mucus that has not only completely encompassed the dog, but also twisted it and contorted it into a position that not only looks painful but is surreal in nature. There’s a gurgle of sound, of breathless bubbles sizzling from the dog’s open mouth in that slimy, coagulated body of the creature it’s caught in and then it moves… not just an inch, but a foot, neutral, blank eyes peering at the girl from an unchanging, unwavering face that only slightly gives off a hint of its mouth, or what looks to be it’s mouth.

Her voice is a breathless scream that shatters the silence between them and all at once, the slime’s body reacts, quivering and trembling until it suddenly lurches forward with all the might of.. well, whatever it is. The girl is surrounded in a matter of moments, quivering voice dried up by the all encompassing embrace of the slime that congeals around her, soaking into her clothes, into her skin, into each and every orifice it can find until she’s struggling for breath, till she’s seeing the world in shades of green within it, till she can no longer hear her own screams, till everything around her but her thoughts are replaced by the gurgling silence of a monster who’s now got her as soon as she’s appeared.

That’s when things get painful. Her flesh begins to feel achy, like she’s got a sunburn. Even while she’s choking on whatever the creature is, her body begins to heat up to temperatures so hot that she feints within, not only from the darkness of suffocation but also because of the internal damage of her organs and body’s mass being liquefied inside this gross abomination of a slime. Just like that, she is vaguely aware of the dog’s fur floating off of it’s body and darkness blankets her existence, pain and worries drifting away in a matter of minutes.

Hours pass like this, the sun reaching high into the sky before Zheshu has finally finished his meal. Large, completely bloated, he spits up and releases what’s left within him that he cannot digest. A stick, left by the dog who had it when he swallowed the beast, a bracelet of some magical material he was unable to dissolve that must have belonged to the girl. That and a bit of cloth that was sticking outside of him from his capture of the child in the first place, each piece covered in a mucus like slime that froths for a moment before crawling across the ground, over leaves and dirt, to join his main body.

With each digestion, there’s a world of difference within him and out. For a moment, that change is not visible and then it becomes readily apparent. He’s turning a shade lighter than he was second by second. It’s not long before he’s as white as snow… Only then little bits of hair become apparent, spiky and alert. His body begins to change shape until it is like that of the dog. And then that white becomes as fur upon the rest of his body. Tail, four legs.. a doggish snout. The only change left.. well… his mane.

The top of his head sprouts brunette hair, hair that is so close to the girl that the evidence of who it belonged to is surreal. And then there are his eyes that flush with the brown of the girl he’d eaten, only less lively and without the light that would have shown her life behind it. His tail wags and he sits on the ground for a moment, accessing the new change, his head half-turned in curiosity before he stands on all fours and strolls from the wood side, his nose close to the ground to scent out the area ahead.