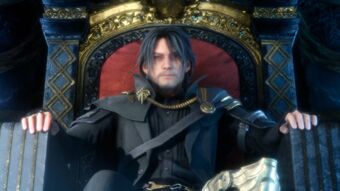 A hologram of Noctis appears before the people. ” We do not want a war but for the safety of my people I have placed the unbreakable wall barrier up and placed my city on high alert. A member of the GSE Sovereign Guard had given my youngest brother Cloud a /Warning/ that a war was coming and that the GSE will be watching the Bloodmoons. Then issued a threat of attacking and killing my siblings, if the situation that Arom and I were peacefully talking about wasn’t settled. So until the GSE Sovereign Guard backs down with his threat no further talks will happen until then. As I will not negotiate with a threat looming over my family. Until then Noctis out. ” Noctis says  as the hologram of him disappears at the end