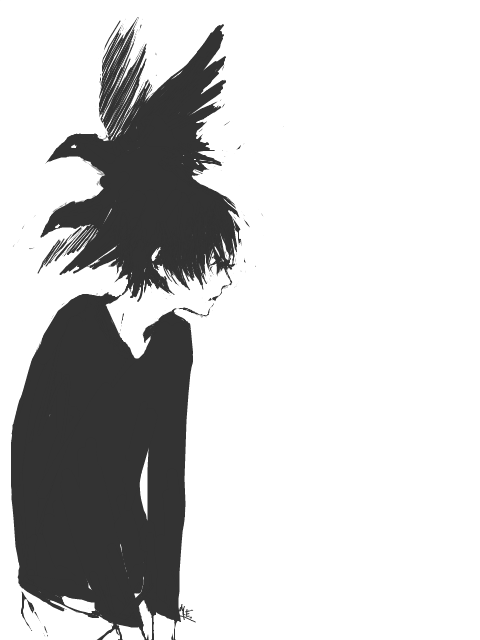 ‘Twas upon a midnight dreary, while Tim pondered, weak and weary, over the list left to him by his Mistress, Valerie, detailing chores. While he nodded, nearly napping, suddenly there came a tapping, as of someone gently rapping, rapping at his chamber door. The silken, sad, uncertain rustling of each purple curtain thrilled him – filled him with fantastic terrors never felt before; so then, to still the beating of his heart, he stood repeating “It’s some visitor entreating entrance at my chamber door – some late visitor entreating entrance at my chamber door; this it is, and nothing more.”

Presently, his soul grew stronger; hesitating then no longer- “Sir,” said he, “or Mistress, truly your forgiveness I implore, for the fact is, I was napping, and so gently you came rapping, and so faintly you came tapping, tapping at my chamber door, that I scarce was sure I heard you.” Then, he opened wide the door.

Darkness there, and nothing more.

Deep into that darkness peering; long he stood there, wondering, fearing, doubting, dreaming dreams no mortal ever dared to dream before. But that silence was unbroken, and the stillness gave no token, and the only words there spoken were the whispered words: “There’s more?” This Tim whispered, and an echo murmured back the words, “There’s more!”

Back into the chamber turning, all his soul within him burning, soon again he heard a tapping somewhat louder than before. “Surely,” said Tim, “surely that is something at my window lattice; let me see, then, what thereat is, and this mystery explore— let my heart be still a moment and this mystery explore;— it’s the wind and nothing more!”

Open here he flung the shutter, when, with many a flirt and flutter, in there stepped a stately raven from the saintly days of yore; not the least obeisance made he; not a minute stopped or stayed he; but, with mien of lord or lady, perched above Tim’s chamber door – perched upon a bust of Pallas just above that chamber door – perched, and sat, and nothing more.

Then this ebony bird beguiling his sad fancy into smiling, by the grave and stern decorum of the countenance it wore. “Though thy crest be shorn and shaven, thou,” Tim said, “art sure no craven, ghastly grim and ancient raven wandering from the nightly shore – tell me what thy lordly name is on the night’s plutonian shore!”

Quoth the raven, “Rufus. Also, I didn’t realize we would be parodying The Raven.”

Tim chuckled sheepishly. “I mean, it all sort of lined up. The night, the tapping… I even had Valerie’s list of errands for me to run. Hence… you know…”

“A quaint and curious volume of forgotten lore?” It was the raven’s turn to chuckle, hopping down from above Tim’s chamber door and hopping onto his desk, peering at the many sticky notes and loose papers here and there. “Sure have a lot to do. Valerie isn’t skimping on your workload.”

“Tell me about it,” Tim groaned. “At least your messenger-ing gets done quickly, and then – and then! You spend the rest of the day napping.”

“Until I come gently rapping-” The raven started, and was cut off by an eye roll from the ghoul, who finished. “-And so faintly you come tapping, tapping at my chamber door.”

“Took your sweet time opening it, didn’t you?” The bird tilted his head, levelling his dark eyes at Tim, who found this creature’s gaze even harder to weather than his Mistress’s. Something about looking into them, and seeing darkness there, and nothing more… He blinked in realization, and stifled a laugh. These references were making themselves.

“Don’t get us caught in a loop!” The raven hopped back, startled, and then let out a croaking laugh, which prompted a smirk from Timothy. “Got the whole thing memorized, have you?”

“Of course.” The bird pecked at a stray crumb on the desk, likely from a cereal bar Tim had eaten earlier. The ghoul couldn’t help but find it odd; Rufus was human-born, but still acted like a bird when in his corvid form. “All Corax have that poem memorized. If one doesn’t, we make fun of them by referencing it, until they get exasperated and learn it.”

“Bunch of devils, you lot.”

If ravens could grin, Tim just knew that Rufus would have then. “The best kind – we steal your lunch, instead of your soul. Or your blood.” A croaking cackle issued from that ebony beak. “You’re living in a world of devils, Tim. When are you going to become one?”

The ghoul’s expression grew serious. “Never, if I can help it.” And with that shift in tone, his mind shifted to business. “Why are you here, Rufus?” The raven sensed Timothy’s sobering, and answered in kind:

“Come back with word from the street. The council tonight – they say the Dymlings are coming.”

Tim’s eyes grew wide upon hearing this. He sat straight up in his chair. “But aren’t the Dymlings…”

“Yeah, they’re all buddy-buddy with the Sabbat. Of course, no one’s ever been able to prove it, otherwise they’d be run out of town, but everyone knows it. Where else would they have learned all that shadow magic?”

Shadow magic? Tim remembered Azif describing something to that effect, when speaking of the Sabbat.

“Obtenebration, kid. Nasty power that lets you twist the shadows, mold them – even fight with them. Frighteningly potent if the user knows what they’re doing.

Tim shivered. There was a frightening thought – that punk, Edward, in command of the shadows. The shit he could pull… and then, his thoughts turned to Valerie, who was going to the council with her proposition. The Chroma were respected, yes, but Valerie was the only one left with any sort of authority in the city. If the Dymlings were there, they’d find some way to undermine her, or make her lose face.

Tim stood up abruptly, his chair tipping over and clattering onto the floor. Rufus croaked in alarm, hopping back and staring up at the ghoul in surprise. “…Tim?”

“She’s already on her way-”

“Then we’re going to catch up to her.”

“What’s gotten into you, Tim?”

The ghoul glared down at Rufus, who found himself shrinking under those eyes, so irritatingly righteous. “You know it’s the right thing to do.” After a moment, the wereraven sighed and hopped towards the window.

Not waiting to see him out, Tim flung open his door and raced down the hallway towards the winding staircase leading down to the main floor. Within moments, he was in reach of the door, before hearing Jane’s humming from the kitchen. She was probably making that night’s dinner, or writing up a list of provisions. Timothy stopped just short of the door, wondering if he should ask her along, and then realized that she would likely be unable to keep up with him and Rufus if they moved along as fast as they could.

With a quick twist of his hand, he pulled open the main door and exited the Chroma manor; shutting it behind him and springing outside, through the garden, out the gate and into the street. He could see Rufus circling ahead, and as soon as the wereraven knew he was being followed, he set off down the road with Timothy hot on his tail. The world began to blur around the ghoul’s eyes as he ran with superhuman Celerity down the roads Rufus led him, scanning the streets for the old Jaguar that Valerie insisted on keeping. She couldn’t have been more than ten minutes out, and at the pace he and Rufus were traveling, they should be reaching her any moment.

Tim got a sinking feeling in his stomach as they hurried onwards, winding their way through the night roads, whipping past cars and their startled drivers and daring to run through busy streets to gain precious seconds. At last, he saw the car, and Rufus descending towards it. Then he realized it was parked. Outside an office building. Along with several other fashionable cars. And he knew that Valerie and her retainer were already inside. Quickly changing shape behind the car, Rufus emerged to stand by Timothy, hands thrust into his windbreaker to ward away the nightly chill. “Well?” asked the portly young man, and Tim realized he was being called on to decide their next move. He pursed his lips and looked up at the office building; the meeting room, he knew, would be on the topmost floor. It always was.

“Well, nothing. We’re going inside.”

“If she wants to discipline us, she can do it later,” declared Tim, starting towards the tinted glass doors. “I’m not leaving her and Redford to the Dymlings. What are you waiting for?”

With a start, Rufus sighed and followed Tim to the doors. Pulling them open, the ghoul entered, quickly crossed to the elevator and was on the verge of pressing the button when he changed his mind. Darting over to the stairs instead, he flickered up them, taking only a half second per flight, until he was on the top floor. From there, he could see Valerie and Redford standing before the meeting room doors. As they turned to enter, Tim raced across the carpeted floor, soundless as he approached.