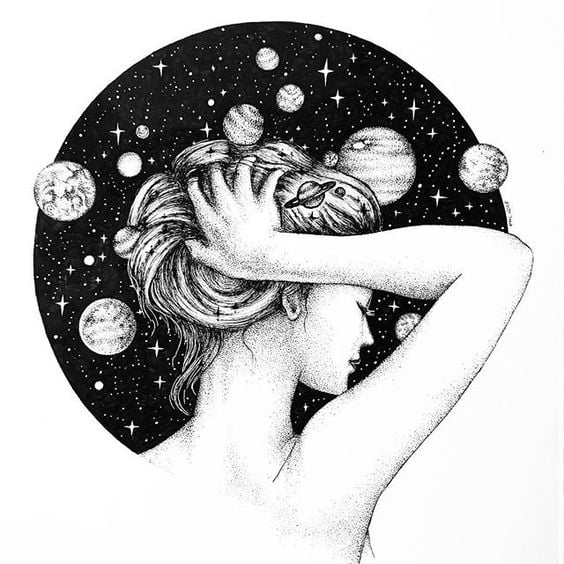 Being broken to the point of near death gave her time to contemplate, and to look over everything that had happened in only a few short weeks. It felt as if Grace were just floating within her consciousness, as if she were back in that void of space, only she was asleep.

But she wasn’t alone in her mind. She could hear other voices. Mostly the ones of herself, but also those that she thought she cared for. Well, namely one. But the one that belonged to her was the loudest. “This is what you get,” she told herself. “You thought you loved him. You actually might have. But, leave it to both him and her to just destroy you.”

“Am I, though? Destroyed, I mean.” She could almost feel herself curling up, knees to her chest. “He just…. walked off. Like I wasn’t worth anything.” She looked up, into the darkness. “Is this what it’s like to be heartbroken?”

“How the fuck am I supposed to know? I’m /you/, dumb ass.” The darkness sighed, though, and Grace found it funny that it could. “Look, call it what you want. But here’s what you’re going to do. You’re going to get back up, you’re going to work for Tsillah, and you’re going to get your shit together. Fuck him. He didn’t appreciate you, apparently, and you have no reason to even care about him anymore.”

“Why? He’s got his /family/ now. What were you? Just a quick fuck. That’s the entirety of it, my dear.” The voice shifted, changed, and it was Tsillah she was hearing now. “He doesn’t need you, and he made that clear. But me? I need you. Even if it’s just for protection of my drug. But, I also need you because it’s nice having another girl around that doesn’t want to fuck me.”

That drew a snort from Grace. Well, it was true. Grace had slept with the vampire. But she didn’t regret it. Either way, Tsillah sighed. Well, the darkness that held her voice. “Listen,” she said. “I have your blade, by the way. The one Mercy gave you? She appreciates you. She likes you. She calls you her /friend/. Take that. Hold onto it. Keep up your walls if you want. But sooner or later, someone will have them crashing down.”

“That won’t last much longer, Gracie. Me and Malakai? We’ll heal you. Physically, at least. We can’t fix that pain there in your heart. But we can heal the broken bones, the shredded muscles, the punctured lung.” It almost felt as if there was a comforting hand on Grace’s face, and in her mind, her eyes closed. “And with me and Kai, we’ll break that curse of yours. The one on your back? You don’t need him, Gracie. You’ve got us now.”

“Tsillah, you’re incapable of love. And you don’t have an emotional investment in me. It’s all financial.”

“That doesn’t mean I can’t like you, dear. I wouldn’t have showed up to help you if I didn’t. That, and I knew what was going through that pretty, brunette head of yours.” Another feeling, as if Tsillah was there, stroking fingers through her hair. “It might not truly get rid of the pain, but you could always take a crack at Malakai. Might make you feel just a little better.”

“Are you insane? I just told you that I loved someone and you’re implying I should sleep with someone else.”

“I would say more eccentric, but yes. I am. Look. You’re a broken mess right now. Do what you need to in order to take back your power as a woman. I have. Multiple times.”

“That’s not the answer.” And the voice was gone. Grace pulled her knees up tighter to her chest, and even if it was only in her mind, she could feel the tears falling from her eyes. She’d been in a lot of situations, been through a lot of hell. But this? This was more than she’d ever felt before.

“Lady Luck won’t save you all the time,” that voice in her mind said, sounding just like her again. “But, that’s all right. We can manage, right? Just keep your head down, your walls up. And work. That’s all you can do now.” The voice was right. And it was getting too hard to think anymore. She let her eyes close in her mind, slipping back into the void of blissful silence.