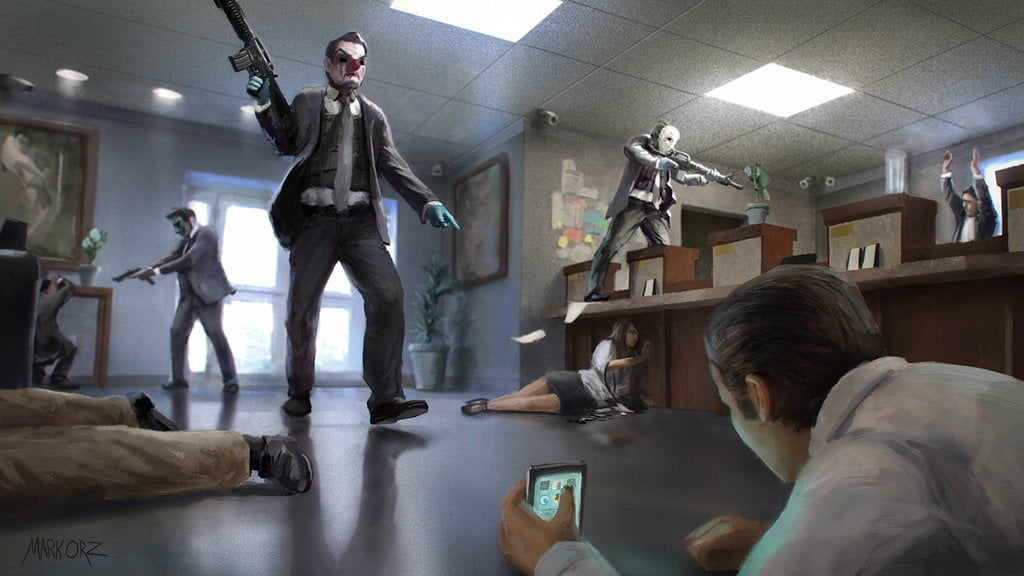 Shots. Something went wrong. How hard can one small bank be, Griff? Do you HAVE to go shooting?

Vest was already inside. He begins crowd control.

Jull gets the drill prepped. Can’t get inside a safe door with the key when the owners not there, so just drill through the mechanism.

And Vader has started doing what he does best. Crack out the mini-gun, and begin issuing threats to the civvies. Oh, and prepping for the cops.

They planned this one out. While all the heroes and good guys are distracted in Ar’Elis, the Dimes R Us crew will be making a nice little pay day out of a small little bank. Just a few days earlier, Vest had gained info that some valuable gold would be stored here. Nice, expensive kind, too. Not that cheap shit sold in the store, no way. The full on solid blocks of pure gold, and a shit ton of it. Enough to make keeping Vader’s mini-gun filled with ammo easy. Only problem is, it shoulda been silent. Now, they’ll have the police going up their ass in no time.

Jull had the drill set up in no time, now the problem was defending it. Vader quickly joins Jull, Mini-Gun pointed to the entrance. Each and every one of them had their masks on. Griff- an anonymous mask he got online. Vader- A Darth Vader mask. Him and that nerd-boner he’s got bugs Jull… Speaking of, Jull, with a female clown mask. And Vest- A rubber chicken mask.

Vest peeks his head inside the room with the drill, holding his tape recorder. He presses rewind, pause, play. “Are you-” Rewind.. “Okay-” Fast forward. “Here?” Jull nods. “We’ll be okay, Vest. Get back out there. Make sure Griff doesn’t do anything stupid for me, will ya?” Vest simply nods and goes back into the waiting room. Vader turns his head to Jull, asking, “You gotta admit it, man… You like Griff.” Jull pulls back away from Vader, looking him down a second.. “How about you keep that thought to ya self, eh?” She asks, with a small threatening tone in her voice. The kind that pretty much says, ‘Cut the shit or i’ll cut you.’

Meanwhile.. Griff applies cable ties to the civvies, leading them behind the receptionists desk. Or is that what they are called here? Ah, fuck it. Vest joins in and by the time the first cop car rolls up, they’ve got the civvies locked up tight.

Griff checks how much ammo he’s got in his Uzi. He finds a full clip. Good, Vader didn’t switch out the clip in his gun with an empty one. He aims at the door way while Vest keeps his M4 aimed at the windows on the left. Within seconds, they are already unloading their clips into the bodies of the cops. Instantly letting them know they are not fucking around.

After the cops are shot down, as expected, they’d bring out the big guns. Cops, but with body armor, machine guns, and much more training. Pretty much, what ever Hellifyno’s equivalent to the SWAT would be.

And what do they send in first? Riot shields. Vest points directly at them through the window as they pass around the corner. He rewinds his tape recorder, and presses play. “Shields-” Rewind… “Incoming-” Rewind.. “Alert the others.”

Griff was already back at the vault. “Aye, Vader, We need that gun. Also, Jull, progress?” Jull looks at the timer a second.. “One twenty seconds, G.” Griff turns back around the corner and rejoins Vest. Vader steps out, and pre-spins his mini-gun as he waits for the cops to arrive… “Oh, this is gonna be fun!” He shouts, just as the cops reach the door.

Griff sprints to a desk next to the door, sliding behind cover. Vest stays behind Vader, as Vader might as well be a walking chunk of Grade A Titanium with the amount of armor he’s got on.

Aaaand now Vader’s mini-gun starts firing as soon as each and every cop with a riot shield is in view. The first few fall over from the pressure, and quickly get mowed down as Vader tears them apart. The next few are a bit more prepared.

They manage to hold their own against Vader’s gun, but as they pass the desk Griff is behind, they’ll quickly find they made a mistake. Griff pops up behind the desk, aims his Uzi, and begins unloading into the cops. Taking them down, one by one. The last one makes an attempt to turn his shield so that it blocks both Griff’s and Vader’s line of fire, but quickly finds that the effort was useless as he gets torn apart from the combined line of fire.

The floor of the bank was already covered in blood and they’d only been here a short time. Griff begins to hope that Jull has the- “It’s open!” Jull announces, just loud enough to be heard over the sounds of more cops rolling up. Lots more.

Griff, Vest, and Vader all run back to the vault. Jull places some bags down to be filled up with the gold. As they fill, Vader keeps the cops off their back. Not a single cop escaped his sight… They all got mowed down.

After a short while, they had around… Seven… No, Ten bags filled to the brim with gold. Vest pulls the tape recorder out again, rewinds it, and… “Let’s go.” As they leave, Vest stops and looks at the civvies… He pulls a grenade out, pulls the pin, and from the tape recorder goes, “Have a nice trip.” He tosses the grenade in, and catches up with the rest.

Not a single human being made it out of there alive while they were there.

But the payday was fuckin’ huge.