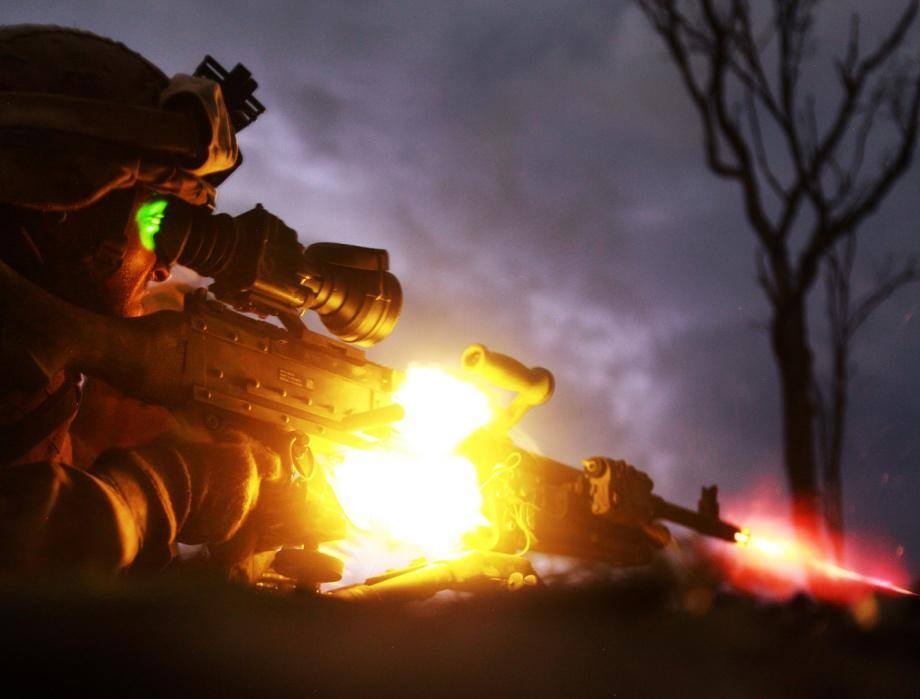 …- as the truck and tent exploded under the 40 MM HE’s explosion, a song echoed in the back of Hawkins mind. MegaDeath’s ” Crush ‘Em” . –

– flicking the semi to auto selection switch, a hail of fire erupted from the M-4 shorty’s 14 in barrel. Yelling at the top of his lungs, he laid down a quick 30 rounds, and ejected the magazine. Sliding in another, he quickly allowed the bolt to slide forward, as he picked off another unlucky soldier. The empty 40 MM canister fell out and onto the dirt encrusted earth, as Hawkins reloaded another, slamming the tube closed. The repeated steady beat of automatic gunfire filled the air once again, as BFI and Sours quickly unleashed more solid lead upon the heads of those still moving. –

– Waving his arm forward, Hawkins summoned the ” Fallback ” command, as they vanished from the lip of the horizon, fading out of view from the enemy’s vision. Tossing the individual mines as they scattered, they quickly formed a line, peppering the ground with the mines as they scurried away from the firing line. Hard breathing as he struggled to keep ahead of the younger squad, the footfalls skipping over the ground like a kiss from the wind. Taking a knee, Hawkins tossed a canister behind them, as it sparked and erupted, blowing blue heavy smoke from within. – ” Affirm…can you identify…Blue smoke…confirmed..We’ll see ya down here on the ground..Contact out..”

– The rotorwash nearly beat them into the ground, but the operation was over and a success. He had brought them all home, safe and alive…All intact..-