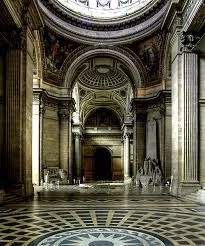 Eva teleported right into her Father’s throne room. Usually he had it beyond warded but she had warned him she was coming and needed to speak with him. Despite this fact, she found the massive room empty. He would know she was there, she knew, he knew the moment anyone entered his realm so he would be along shortly. For now, she paced the large room, listening to her footsteps echo about the mostly empty walls. It was a bright room, strangely, with his throne of black obsidian and some murals of a red headed Angel. Eva knew who that was, her mother of course. Vergil had never denied his love for his wife no matter how dangerous it had been at the start. It made her smile when she realized that maybe he would understand what she wanted to tell him.

Flopping into his throne, she sprawled her legs over the arm and stared up at the ceiling. Maybe he would finally understand. The massive door creaked open and she raised her head before jumping to her feet. *Best behaviour Eva,* She told herself as she stood with her back ramrod straight as had been drilled into the girl by her father. Soon enough, Vergil entered alone and the doors were pulled closed behind him. The silver haired man walked toward her with his hands behind his back. His clever blue eyes bore into hers as he drew closer. For a long moment, he stood there and stared into his daughters crimson ringed purple eyes. Finally, he seated himself and gestured.

No hello, no how are you. Not a good start, she mused before speaking. “Hello Father, I missed you.” When he cocked a single silver eyebrow, a look that Eva unconsciously often mimicked, she sighed. “Fine.. I want to speak to you about your Decree of my dating Demons.”

One word at a time. Did not bode well at all. The girl stood before her father and swallowed the jokes she was going to make to soften him. She did not believe it would work. “Yes, I do believe that I have found the one I love and father -”

“Cyprian.” He said, his voice cold as he cut her off.

Eva stopped and blinked, she had thought she had hid it better than that. Slowly, she nodded. “Aye dad. I love him and I want a chance to be with him.”

Vergil said nothing as he rose from his throne and made his way to the bar along one wall. As he uncapped a bottle of a black shimmering liquid, he called over his shoulder, not raising his voice. “Do you know why I made that decree, daughter?”

Daughter… Not her name. Eva’s heart sank a bit more as she did not turn to face him, standing at attention in front of his throne. “You do not want me to end up with another Demon lover.”

“No, I made the decree to spare you… And myself.” He said simply before turning to face her. He held a glass in his long fingers but did not drink it. Instead, he walked toward her. “When you were very young, you followed Cyprian around like a lost pup. I tried to stem that from growing into something else as you aged but he was the only one I trusted to keep you safe.” That had been the dangerous time when both Heaven and Hell wanted the Nephalem dead. She was too dangerous to allow to live after all, if neither side could control her. Though, neither side wanted her on the other side.

“Yes, I know this. I was a silly child.” Eva admitted, trying not to grin at the memories.

“It got worse. I remember the day that you fell in love with him, Eva. The day I saw it in your face when you looked at him. I diverted your attention by sending you to meet with Tarsid.” He sighed and ran a hand through his hair. “I had not expected that smooth bastard to sweep you off your feet like that.”

Eva frowned. “I only just realized that I loved him.” She said and then groaned as she just blew everything.  So, she shifted gears. “Tarsid was a good man. We were happy, dad. You liked him.”

“He was not technically a Demon, Eva. He was a Fallen, a cast out for questioning. But your love saved him. I know where he is now, Your mother keeps me updated.”

“Okay, but why the decree? And how does it protect you? And what does it have to do with Cyprian?” She prodded.

He stopped in front of her, his free hand touching under her chin to raise her face to meet his eyes. “I made the decree so you could not have him. So that you would not hate me.”

“Dad, you are losing your mind.” She said with a surprised laugh. “Why would I hate you?”

“The day will come when an order I give him will lead to his death.” Vergil said gently. “One day, he will die because I have sent him to complete a task. You will lose him because of his loyalty to me. Before you ask, I could not cast him out, it is not an option but that is not my tale to tell so do not ask.”

“But… Cy is an amazing warrior -” Eva countered but was interrupted by a shake of his head.

“Cy is indeed a powerful warrior and loyal to a fault. But in the end, he will lose and you will blame me for my order that will steal the only man you have ever loved with every inch of your soul.” Vergil whispered. “I will not do it. I will not have you hate me. Eva, I can not have you, of all, hate me for that. I am sorry. The decree stands..” Leaning forward, he kissed her forehead as her eyes closed to hide the tears. Moving from her, he left the room, closing the heavy doors behind him.

Eva stood there alone for a while, her eyes closed as tears spilled from beneath her eyelids. Finally, she moved and dropped her ass into her father’s throne and set her face in her hands, sobbing softly. A few moments later, the doors opened again. “I get it dad,” She called, not looking up. “I get it okay.”

“Get what?” A familiar voice responded as the door closed. Eva looked up to see Cyprian.

“Cy..” She gasped and rose, throwing herself into his arms.

He looked baffled but slipped his arms around her and hugged her tightly. Cy let her cry as he rubbed her back lightly. “What happened?”

Eva told him what she had asked. “Cy, I love you. I want to be with you. I don’t want to go through my life so close and unable to … have you.” Her crimson ringed purple eyes found his malachite gaze. The pain within them shook her to her core. He loved her too! She saw it, it was right there. “But he said no…”

Untangling his arms from her, he stepped back and pulled a cell phone out of his pocket. Eva cocked an eyebrow, a question in her eyes and he chuckled. “I got it after your Nymph of a brother was able to contact you and I could not. I have added you, by the way. No more standing me up.” He chuckled and seemed to be searching for something. After a moment, he set it down on the arm of the throne and the soft sound of a piano filled the room. Moving closer, he held out his hand. “Dance with me, Eva…”

She stared at him, confused as all hell but did as he asked. He drew her close, his hand on her hip after setting hers atop his shoulder and taking the other in his own hand. His chin rested atop her head as he sang along softly. Tears spilled down his cheeks as he did so but he was sure she could not see them.

“One of these days the sky’s gonna break and everything will escape and I’ll know. One of these days the mountains are gonna fall into the sea and they’ll know. That you and I were made for this, I was made to taste your kiss, we were made to never fall away. Never fall away” he sang softly, his voice rough and deeper than usual. He felt her sobs as he continued to sing and dance her through the room, for the moment, it was just them. “One of these days letters are gonna fall from the sky telling us all to go free. But until that day I’ll find a way to let everybody know that you’re coming back, you’re coming back for me. ‘Cause even though you left me here

I have nothing left to fear, these are only walls that hold me here.”

They danced together neither aware that Vergil was watching from his secret place. His jaw was clenched tightly as he brought a small silvery stone to his lips. “Uriel, my love, we need to talk.” It was replaced into his pocket and using his Hellfire, he vanished.