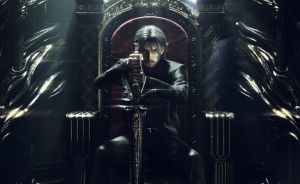 Dear Citizens of Hellifyno, some of you may know me or seen me from being around your world in the past but most of you don’t. So I will introduce myself. I am King Noctis Lucis Talos Bloodmoon of Eos-Gaian, a planet in an universe not far from this one.  We also have been receiving these  messages upon our ships that are in your universe of space and I have sat here listening to them. Well I have had enough especially when the being known as Arom brought up one of my Shadow Glaive Guardian’s names. A man you know as Gilver Dark. Yes I know he was once a warrior of the void but he battled it, got cleansed of it and now fights for the light and for Gaia.

Him and the other warriors Alexandria, Kida  and many others that fight for their home have hope in their hearts. Yes they haven’t gone after the void yet but in due time they will rise like a phoenix and defeat the void with their plans. I know to most of you especially Arom thinks that they are just delaying but they are not. They are just not rushing into things. They are making sure they will not fail . I believe in these warriors as should you, give them your hope and your prayers to Gaia so that they may bring her back to Hellifyno with the seed of life.

We all can be the light in this darkness, The hope in this time of Sorrow, Don’t let those that have died, die in vain because of some AI from a planet that is worried that the Void will spread to their planet. Yes we are all afraid of that but the only way to do this is join together to battle it, to bring balance once again. To stop listening to the messages that spread hopelessness and puts down the warriors.  Stop bickering and fighting among each other. We must stand tall together as brothers and sisters against this Void if we are to succeed.  The fate is in your own hands to create the future of Hellifyno.

This is King Noctis Bloodmoon signing off.