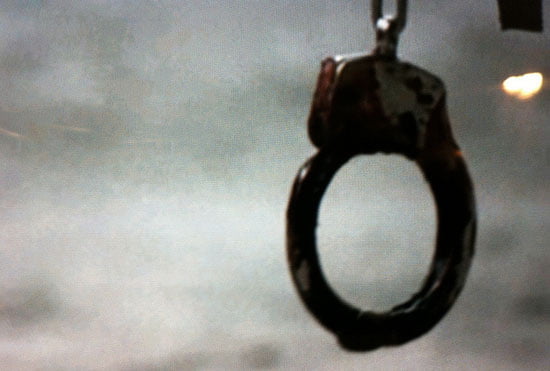 “If you’re not a religious man, mister Cadell, then what do you believe in?”

The green light of the tape recorder glares at me.

“What does a newborn believe in, or a five year old? What do you believe in?” The handcuffs gnawing my wrists clink as I raise the cigarette to my lips in both hands. “Would ya do me a service, ma’am?”

The suit-sporting woman across the table tucks her curly golden locks behind her ear. She glances questioningly at the surly officer standing guard by the door. He nods his approval and approaches with a box of matches.

“You didn’t answer the question,” she says, fighting the tremble in her voice as she takes the box, strikes a match and leans over to light me up.

It’s easy to see that being within a stone’s throw of me repulses her. Me pa always used to say that if you look closely enough, you can read everything you need to know about someone in their eyes. The eyes are a doorway into that hidden cavern where all things are forged. Doctor Noon wears her heart in that pretty emerald stare of hers. This is our third session and I’ve already come to the conclusion that she’s new to this job.

She clears her throat. It’s a sign of discomfort. I can feel her foot tapping a nervous tune beneath the table. The crimson cherry between us pulsates as I suck down some smoke. That single lungful of death fills me with a small sense of triumph. I’ll take whatever creature comforts I can get. I don’t know how long I’ve been left to rot in this dreary interview room with my ankle shackled to the table leg, but until now I’ve been utterly starved of contact, unless you count that persistent fly buzzing away in the corner. For all I know, days have rolled by.

“Answer me first and I’ll tell ya what ya want to know,” I croak between mouthfuls of smoke.

Noon shakes the match until its flickering flame dies. “I can’t speak for newborns or five year old’s, mister Cadell. But I believe in God, in the immutable word of common law.”

Now she stares at me with such brazen conviction. There’s a light there, this paradoxical glow inspired by personal credence, by her own perceptions and dogmas, wrestling with her unease, the fear glinting in the white’s of her eyes.

“Do you believe in the Devil?” She asks.

I don’t believe in anything. I’ve often been accused of being a nihilistic bastard, but that’s a load of shit perpetuated by people who like to think they understand the way I tick.. I’m a realist. That’s why I don’t believe in the Devil. If he existed, I’m certain he’d be fond of someone like me. I’m his favoured breed of monster and the fires of his destined resting place are where my ilk belong, beside the debauched and the damned. A killer can scrub his hands as vigorously as he likes, the blood never completely washes out. I’m a pariah. I’ve always embraced the outlaw lifestyle, facing the world with a bottle of whiskey and a smoking gun.

“Because he’s given me no reason to. If the big bad wolf wants to show himself, then maybe I’ll alter my view. I’m not definitively saying that he doesn’t exist, but if he does, he’s not an angel or some magical monster.”

“If he wasn’t magical, then how could he logically exist thousands of years after he was written about?”

You’d be surprised, I think to myself. Am I not proof of that? “Just because we don’t understand something, it doesn’t mean that magic is the only answer.”

She flips through the pages of her clipboard, then hastily jots something down.

“You don’t think he has anything to do with your…condition?”

“Nope. Why should I believe in a figment of a bronze-age fairy tale? This is our third session Doctor Noon, do you really expect me to buy that you care about what I believe? I’m not an idiot, you just want to prove I’m sane so you can lock me up for good and throw away the key.”

She’s steadily regaining her composure, the professionalism she’d espoused before learning the truth about what landed me in here. She lowers her clipboard. “Beliefs are important, mister Cadell. They often lead us to conclusions about why people do what they do.”

I snort. Smoke spews from my nostrils. “Beliefs masquerade as truths. Truths are measurable, they’re universal. Undeniable. But our beliefs, they’re selective. They’re malleable. When they set in, they become personal truths; we view the world and our experiences from that perspective only. It’s a clever illusion.”

Her pen hits paper again. “Tell me about Genevieve Dupont. How did you feel when you shot her in the head and burned her body?”

Quite the change in tack…

“She deserved it. The bitch cooked children and ate them.”

“So you believe you are the good guy, that you were doing the world a service?”

In spite of myself, I actually like Doctor Noon. I like her pragmatic approach. However, she has no idea what she’s on about. Psychologists think that they can place everything, everyone in a tidy little box. It doesn’t work that way.

I take a final drag on the cigarette, stubbing it out in the raging eye of a snarling wolf tattooed on my forearm. I don’t so much as flinch. “I definitely did the world a service, and I don’t believe that I’m the good guy. I know I’m a piece of shit. I’m as bad as they come. But the world needs bad people, Doctor Noon. Bad people keep the wolves from the farm.”

“Do you think that all of your murders were justified in the name of the greater good?”

“Not all of them. Most of them. I would tell ya more, but I’m pretty sure your mind is already made up about me.”

“I would have to go back to the start, and ya wouldn’t believe a word of it anyway. It’s a long story.”

“Try me, we’ve got all the time in the world. It’s not like you are going anywhere, is it?”

Oh, now that was a low fucking blow. I like it, and show as her as much with a coy smirk.