Home Interview with a Mouse

Interview with a Mouse 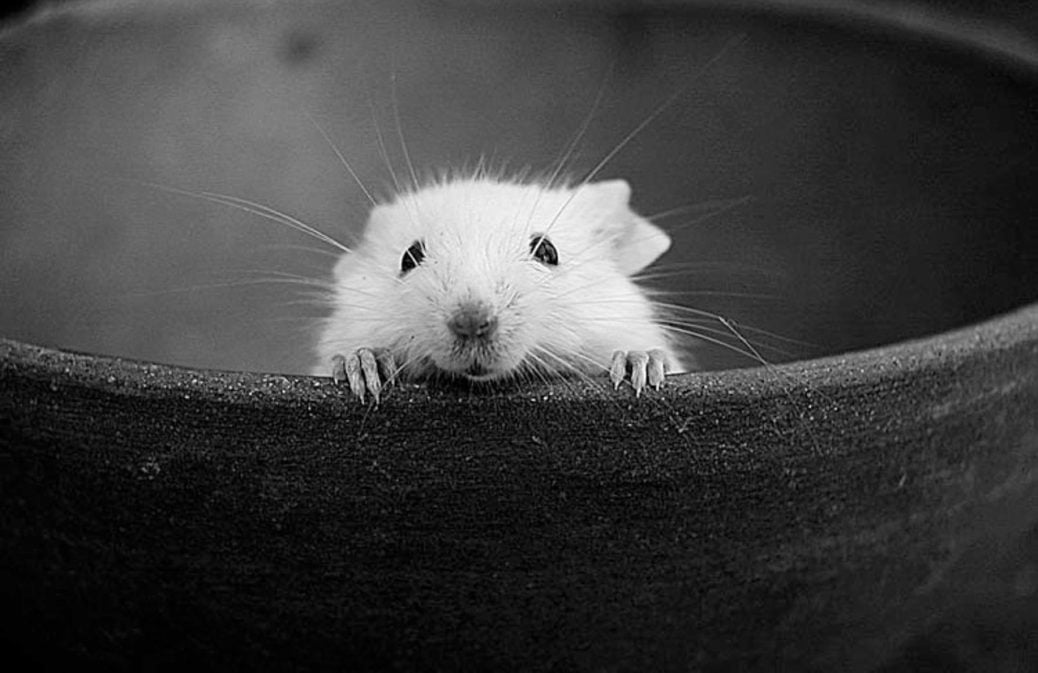 Echo was ushered into a room with a table, a chair, a wastebasket, and a button to press when the interview was over.  On the table was a cage, and in the cage was the mouse.  She had the key to the cage.  She sat down and unlocked it.

The mouse shot out and raced around the room looking for any means of escape, screaming what she assumed were profanities and obscenities in Mouse the entire time.  Finally it dove into the wastebasket.  Aelu, the slim healing snake who lived in Echo’s braid, started laughing and asked her, in Parseltongue, if she wanted him to translate.  She turned down the offer.  Then, as prearranged, Aelu slipped out of her hair and hid himself in her right sleeve.

After a couple of minutes, she spoke.  “I really mean you no harm.  I just need answers.”

The angry mouse looked at her and chittered, eventually switching to Common so she understood him.  “It’s you!  You’re the one who wanted them to kill me!  Let me out or I’ll… I’ll… hmph!”

“Listen to me.  Answer my questions truthfully and you will be returned to the place you came from unharmed.  I promise.”  She emphasized the last word.

“No!” the mouse said defiantly.

Echo just looked at it for several seconds.  It was quivering.  Suddenly she hated what she was doing.  Her voice gentled.  “I am sorry I told them to kill you.  I was sick and afraid.  Now I am better, and I truly do not want to hurt you at all.  Will you not at least hear some of my questions?”

After all, it really didn’t have much choice.  “Well… okay, but don’t you try to trick me!”  The mouse came out of the wastebasket, climbed a leg of the table, and stood at the very edge of the surface, as far from the cage as possible.  This was, however, not very far, because the table was not very big.

Echo closed the door of the cage, locked it, and slid the key over toward the mouse, who seemed to relax fractionally.  “There,” she said.  “I cannot lock you in again, and as I said before, answer me truthfully and you will come to no harm.”  The mouse gave her a disbelieving look and stood on the key

“First of all, my name is Echo, and I am a healer.”  The mouse sneered at that.  “What is your name, and what is your gender?”

“I am male, and my name is Crispin,” the mouse replied grandly.  “And you behave very badly for a healer.”

That was a hit, because Echo agreed with him.  She thought before speaking again.  “The urgent need for answers directs my behavior at present.  Are you ready to begin?”

“Why do you think I would tell you the truth?”

“Because my friend is faster than you are.”  Aelu slithered out of her sleeve and grinned a snake grin at Crispin.

The mouse’s eyes grew enormous.  “You said you wouldn’t hurt me!  LIAR!”  And from nowhere visible Crispin pulled out a tiny gun and fired it at Aelu.  Orange darts of light streamed out.

Aelu shot out of the way and in two instants had knocked the mouse over, grabbed the little weapon, and thrown it off the table.  The snake started to laugh, but then saw that at least one of the darts had hit the back of Echo’s left hand, which had a line of burn and blood across it.  He reared up like a furious cobra.

“NO, Aelu!  I need him alive! And I promised!”  Aelu hissed furiously but closed his mouth most of the way, his eyes boring into those of the mouse.

Echo opened her healer’s pack and took out a few supplies.  Glancing at the once again terrified mouse, she said, “Aelu, give him some space.”

Snakes can’t growl.  Aelu growled.  He also moved about a foot away from the mouse.

She disinfected the small wound and applied a cream for the sting, but it is awkward to bandage one of your own hands.  Probably to placate Aelu, Crispin offered to help and, closely supervised by the still-angry snake, held the gauze in place so Echo could tape it down.  As a peace offering, it was quite successful.  She smiled and thanked him.

Crispin stood up as tall and straight as possible and replied, “I will tell the truth – as much as I am able.  There are certain trade secrets I can’t reveal.  Will you respect that?”

“Yes, I will.  For one thing, although I am quite curious, I never intended to ask you about the ‘experiment’ you mentioned.  I understand the term ‘double-blind’ completely.”

Echo took out a notebook and a pen.  “First question:  You said the original Hellifyno was prefabricated.  That is not true, correct?”

Crispin exclaimed, “I never said that!  I swear!”

The mouse stood firm.  “You must have misunderstood me.  We did – my ancestors did see the creation of the planet.  Their records say it was…” he cut himself off. “…unusual.  I can’t say anything else, except it was not prefabricated.”  His eyes dared her to break her word.

She was still sure, but had no proof, so just nodded.  “Next – what did you use to build the new planet that replaced Hellifyno?”

The mouse spoke indignantly.  “It IS Hellifyno.  Pure one-third Hellifyno debris.  The rest came from barren worlds.  It all went into forms that were combined, and then the planet was sowed with clones of seeds and plants we had collected – we do that all over the galaxies in this part of the universe.”  He gulped, and Echo thought that probably it was something he wished he hadn’t said.

“Remarkable,” she replied mildly.  “Why did you use part of the original’s debris?”

“Well, for one thing it was cheaper to do it that way.  But mostly because Hellifyno is an unusual planet, and the debris had a unique essence.  Without that essence, we would not have been living up to our end of the contract,” Crispin added majestically.

“Is that one-third spread throughout the planet or concentrated in one place?”

“It is dispersed throughout, so there is some essence everywhere.”

That was good.  She went on, “All right, new subject.  What did you do with the souls you collected?”

“Did you do the same with them in this case as in other reconstruction projects?”  She suspected not.

Crispin looked relieved.  “No, so I guess I can tell you, well, most of it.  The force you call Gaia required many souls to help strengthen the essence we had recovered with the debris and to plant a tree.  Some souls were paid to the Nine Hells in return for heating the interior of the planet, because of course it had to be what you would call magical fire.  Normally we use another method.  Some we also traded to the Nine Hells in return for precious metals and gems.”

Echo frowned.  “You said you didn’t need those.”

The mouse smirked a bit.  “We get a much better deal on those thing from the various Hells than we could have gotten from you.  They really like souls, and the Nine Hells material is very high quality.  With what we get from them, we can buy the construction supplies we need.”

Echo looked up from her notes, frowning.  “Where’s your profit?”

“Look,” said Echo, “it is not as if I am going to steal from you.  But I absolutely need to know where all the souls go.”

“Well – promise not to tell anyone.”

“I might have to tell one person.  It is her bit of soul I must find.”

Crispin shook his head.  “If that’s where it went, you won’t find it.  We sell the rest to the soul-eaters of a planet you won’t ever have heard of.  That’s where we get our profit.”

“Oh, gods.”  Echo felt nauseated.  If that was the case, Alexa had no chance of being reborn, and she had no idea whether other Phoenixes had signed the contract.  “I do not suppose there is any way to tell where an individual’s portion of soul went?”

She was surprised when Crispin thought before answering.  “Well, what kind of entity is this person?”

“Oh, well, then, that’s easy.  Definitely would have gone to the Nine Hells.”

Echo leaned forward.  “How do you know that?”

Echo closed her notebook and put it and then pen away before folding up her pack.  “That is all.  Now I know you will not like this, but for your own safety I suggest you get back in the cage.  Part of MY contract was that you were to be returned unharmed, but it is far easier for someone as small as you to be hurt accidentally running around loose than in a cage.”

The mouse thought about it, then said, “Okay.  But can I have my gun back?  It was expensive.”

While Crispin walked over to unlock the cage, Echo got up and found the gun.  Only then did she notice that the back of her hand had streaks of purple spreading up from under the gauze.  So that was probably why she still felt nausea which was, in fact, getting worse.  “Crispin, why is this happening?”  She couldn’t prevent Aelu from seeing it, but gave him a steely glance to keep him from doing anything.

“Oh, dear.  You’re allergic.  Or something.”  The mouse pulled, from an invisible pocket, a sheaf of mouse-sized papers and shuffled through them before handing her one.  It was the size of a large postage stamp.  “This should do it.”

“This has the formula?”

“No, you put it on the wound.  Sooner rather than later,” he added, and quickly locked himself into the cage.  “Keep that snake away from me!”

She pushed the button that opened the door.  A guard came in and took the cage.  “Cheerio,” Crispin caroled, saluting.  Aelu hissed furiously.  The mouse called Aelu a vile name in Mouse.  Echo sat down to remove her bandage and put the “stamp” on the back of her hand, where it stuck.  Then she threw up in the wastebasket.