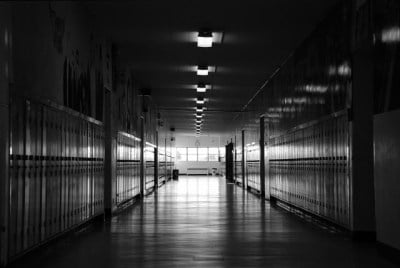 Why I’m putting writer’s note before the story and not after? Because I know this one may seem a little bit controversial to some. But all in all, I had a dream, that is fading away as we speak. The theme will be controversial, and to many a ticklish subject – not from a PG side of view and more from the thematic. Thus I wish to timely apologize to those who would find it a little bit more troubling. All I am trying to do is to capture the feeling of that what flashed before my eyes. Thus I couldn’t stress that enough. Viewer discretion is advised, please!

It was a regular day. A dry bread touching the lips, that tried to apologetically hide some butter and cheap sausage in between. It was a lunch break. The day seemed long, despite not even being in half. Seriously, three test in a row, one was enough. And two were yet to come. My gray eyes looked up at the clock to witness the half past twelve indication that the large dark arms were pointing out.

I finished my dried sandwich and washed it down with a bottle of a watered down syrup. I did wonder to myself. Perhaps my Spartan-like lifestyle was the reason I didn’t get many friends. Those who I did get, usually practiced a hermit lifestyle. Licking my fingers it mattered little. My eyes escaped to the two girls, one in particular. Needless to say, someone I also exchanged words with, but mainly about subject o study we did not understand.

I had little interest in relationship, all the drama, interrupted by school bell seemed like a field, I wasn’t unable to accept. Rising from my seat I took my bag, and stood up, curling up the plastic bag, that I had used to wrap my lunch. Indeed. To what it is worth, life is long enough to make amends.

It was but moments later I made my way trough the busy and loud hall. Not even ear buds could save me from the noise that was intruding my personal space. But that was something everyone had to live with. Some simply dealt with it better. And some worse. A scream came from behind. Indeed. Screaming now are we?

But what was strange and made made me look back was the silence that followed. Looking back I saw a crowd of people just frozen, looking in one direction. Did a school fight went a little too far? Wishing to not be involved in this I decided make my way towards the stair way. Once I opened the door, it was then, when a horrid realization washed over my head like a wave.

A sound of an automatic gun filled the hall, and soon screaming, a herd of people was running towards me, as I could capture, a hand rising, shooting the ceiling guerrilla style. The white protective layer fell down, behind the heads of people, with terrified eyes.

I had to act. I had to save myself. Even if I was no-one, I would be no one, If I hadn’t had the life, that would be long enough to make amends. Due to my decision I was in the best position to open the door, and be the first to rush down the stairs. Some people were making their way up. “Run!” I shouted, and people behind me started to wash down. In a herd instinct some obeyed, whilst some watched like stags on the road. “Run!” I said. “Shooting!”

Happily I didn’t have to say twice. The way wasn’t as Clear, but the crowd managed to move. It seemed that the door connected to this stairway was locked. In the hectic craze, all the people could thing was to push forwards. I had to get out and find a way out. I had to survive. Hearing another shot from above, I made my way sideways, to pass into the hallway of the second floor, where I thought I could pass towards the main stairway, leading to the outside.

Breathing heavily, I knew I was afraid for my life. Finally I stopped by the main stairway. But the door was budged by the masses of people moving by it. And five people were trying to push them open, unable win the crowd. Part of that company was the very same girl, and her friend. My classmates. We were supposed to have a class on this floor.

My brain was a mess. What could we do at this point? We were stuck. “Get low and lets hide.” I grabbed the first person by the shoulder. “We won’t get there!” I tried to be reasonable. And then my eyes looked up.

I still had my earplugs in. But until then I didn’t notice how loud my music was playing. I pushed the girl, as she fell. Perhaps she will snap out of it finally. For what I saw, were two girls, holding small rifles. As to where they got them was not explainable. But that smirk on their faces. It was taunting. All the people I hated, had this smile. I could hear the music. My arms were frozen in fear.

“Sing me another poem, my sweetie. Some other time.” Strange. What a strange song to play at this moment. One of the girls rose the gin at me, whilst the other eyed those who ran, and slowly walked their way. With a mocking grin she showed her teeth. Dressed like some sort superhero from one of their stories, she couldn’t hide the double chin showing above the collar. And with a mocking grin, she said the worst words someone may say in this situation. Disconnected and unreasonable. Idiotic. “Allah Akbar”

I felt two iron fingers touching my heart and bottom of my right lung. It was strange. It seemed like wind was blowing trough my body. It almost felt cleansing. My eye glared at the eyes of the scared women I tried to save. I saved them Didn’t I? Even if my life didn’t count, perhaps they will have the chance to make amends. My knees heavily fell on the cold floor, as I thought to myself. “Run, idiot.” But of course she would hear my plea.

My vision turned hazy, and then, a soft touch to my forehead, made it black.

And it was dark.

The worst part is, I don’t know what happened next. I didn’t get to be a part of it.