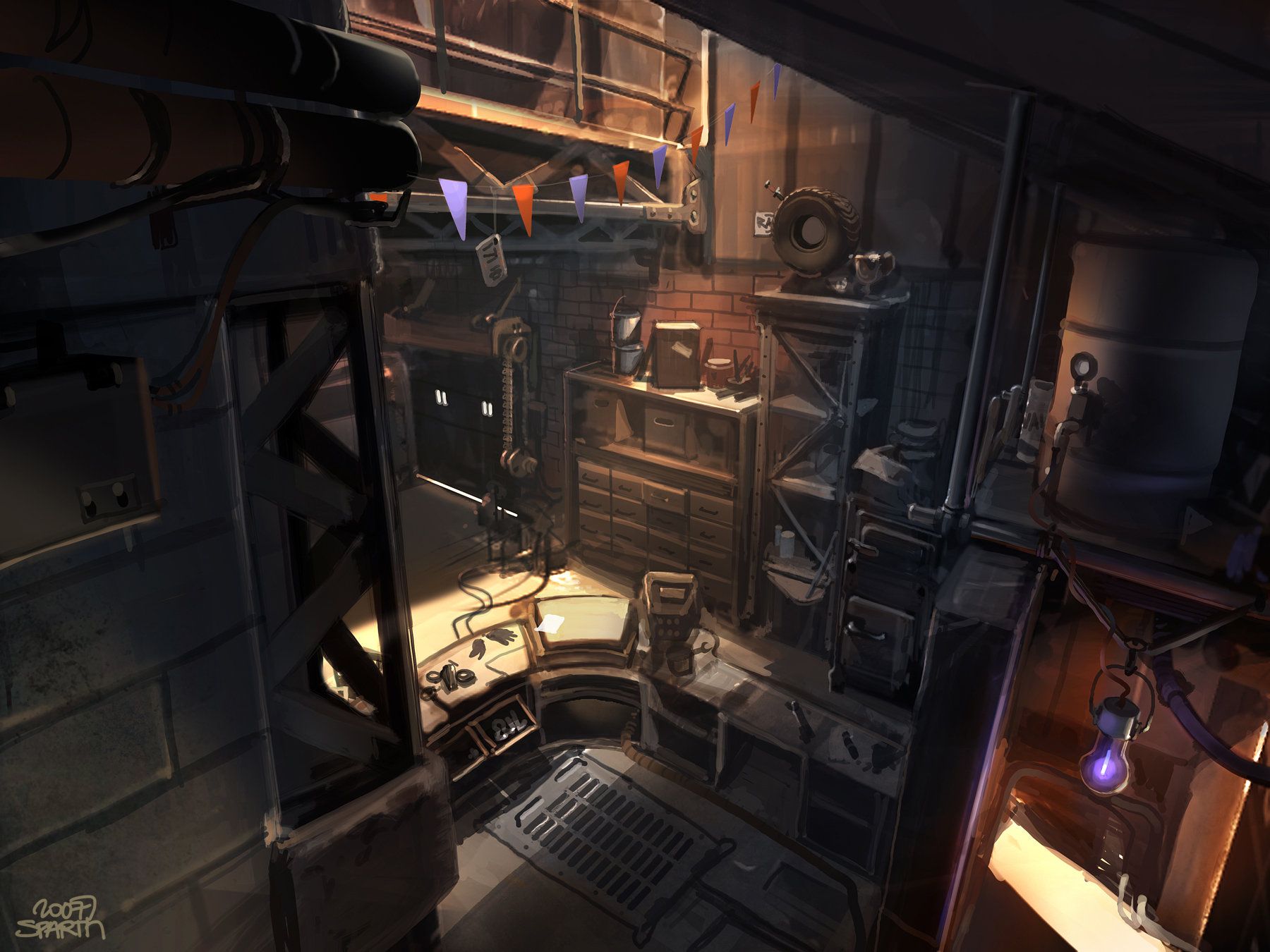 The night in any city can be rough…here it’s no different.  Why a small little fey looking red panda would be working late inside a garage in one of the rougher sides of town…which was saying something for this city; know one would know.

Little legs sat underneath a raised up motorcycle moving a long to the music that echoed in the background of the shop,  “Oh Black Betty…boop a doop…oh black betty boop a doop.”  Bowen sang along, but he only could remember the words Black Betty to the song.  “Ah…there we go.”  A satisfied sound with one last turn and tightening up of the last bolt.  Sliding out from underneath standing to his full 2.5 ft tall putting his goggles on his head, his fur filthy with grease and dirt from a hard days work.  His overalls stained from a long time path in a garage.  Removed the set of gloves he had on as he moved over to the computer where he looked at the bike that sat wired up to different cables hanging from the ceiling.  “Let’s see if I got the improvement I need…and hopefully fixed that gyro throwing off the balance.  I’m too damn little to have dat ting spill on me….again.”

Sitting down at the computer pulled up the schematics putting a set of commands to start running a program to start testing all the systems on the bike.  Bo rolls backwards in his chair putting on a pair of new cloves, ones a little more electronic then switched goggles for a set looking like advanced VR gear and plugs the jack into small hidden port behind his ear.  The digital world speeds forward as he logs into the room.  There he stands in front of a digital form of the bike with command screens popping up as he selects the run program with an x-ray internal look at the performance and the specific pieces he just installed and fixed up.

The bike went onto a virtual a ride with him on it still watching from all corners surrounding the bike as it rode on a virtual road.  Each Bo taking notes of even the most minor of details wrong and improved on the movement and power and performance of the bike. “Well the new gyro system is working better than imagined, going to have to send a nice bottle of juice to my TechCo buddies for loaning it.”  he giggled, nice joke it did help him remember to remove the code and serial number from it though.  Couldn’t let it be registered to them any more now can he?   “Let’s check the conversion stage.”  Pop ups pulled up a new list in front of each Bo each selecting something different all looking at different parts of what was to come next.  With the command “go” pressed the motorcycle converted into power armor fitting the rider inside of it.  The thing skidded to a halt falling over as it went into it’s full form.  “Darn Boots for kicking dirt!”  Bo wasn’t happy with that result he was going to need some sort of way to keep the momentum of the bike while changing and not wrecking or blowing the whole thing up!

“End program!”  Bo yelled out the cables went dark and the computer system and digital world was logged off pulling him back into the solid world.  “Sugared honey Ice Tea!”  He threw the gloves and goggles off onto the work bench.  “3 months I been workin you!”  he yelled at the bike.  His tone was mad, but it was child like in its nature with a higher pitch…hard to be intimidated by that, especially with inanimate object.

A disruptive pounding on the partially drawn blast gate with the sounds of boots and shoes skidding around on the gravel outside.  “OPEN UP YOU LITTLE TRASH PANDA!  YOU FUCKING FREAK, YOU OWE ME MONEY!”

Bo snorted he remembered this guy…he was a bad boy, probably why he wore that spiked collar.  He rolled over to his keyboard sitting in his chair pressed a key and the gate rolled open.  Five very tweaked out Funk Punk street gang members stepped into the garage.  They were lead by a overly thin human with obvious implants running through him.  The denim vest frayed at the arms with a large Britain flag on the back of it.  High platformed boots and different glowing tattoos, piercings, and interesting spiked garb with his leather pants made him a walking cliche.  Those with him wore similar dress, though his mo-hawk was the tallest and changed colors like LED Christmas lights or a cheap light up fiber wire tree.  “You owe me money you little fucker!”

Bo was cut off by the tall mo-hawked male, “It’s D-Bop!  You little shit!  YOU KNOW THAT!”

Bo winced and nodded thumping his head, “Sorry, sorry.  You right, you right.  D-Bop.  Why do I owe you monies?”  Bo knew what he was talking about but he didn’t really owe Denny anything.  He knew that.

“For the shit job on our ride man!  It’s in a ditch because the tires blew out during our shoot out with K-Street!  We lost Rollo!”  D-Bop was very upset.  They did have cuts, bruises, and abrasions on all of them.  With a quick analysis shards of small glass were found in them with some gravel.

“D-Bop…I doubt it.  You’re all tweaking on something dat ain’t pixie sticks, and you have signs of a wreck not a fight.  Without the car I can’t look it over either.”  Bo wasn’t moved by this…they tried this about 3 weeks ago and all they wanted was the money to get more of whatever new designer drug there was to get high on…some not so designer too.

“FUCK YOU! YOU FURRY FUCK!”  D-Bop pulled a pistol from his pants, it was standard revolver with a case-less round cylinder which meant it held anywhere from 10-12 shots if it was loaded at all…ammo wasn’t cheap and they were looking for money that they must have blown on whatever they were hopped up on.  The rest of the crew pulled weapons and lifted them towards Bo.

“You know I don’t like violence D-Bop.  I friendly.”  Bo smiled a wide smile.  The looked at the gun inquisitively, “Isn’t dat Rollo’s gun?”

D-Bop was thrown off his game slightly as he had to think about it.  Did he take the gun off Rollo’s corpse?  Everything was hazy.  He closed his eyes shaking his head, “SHUT UP!  YOU’RE TRYING TO CONFUSE ME!”

“Trying?”  Bo said smashing D-Bops hand with a wrench he had grabbed while he was in fact distracted and confused.  He used both feet to boot simultaneously pushing himself back off D-Bops groin.  Dropping the man to his knees with a groan oozing out of him as he fell.  The rest of the gang freaked out and opened fired, though it was too late Bo had reached his armory and closed the door.  The bullets ricocheted off bouncing around the room making the gang take cover one even was hit in the buttocks from the wild fire.

D-Bop struggled to his feet pushing off advances to help him up.  “GET OFF ME!”  Moving with a sore walk he made his way to the armory and began to pound on the door.  “GET OUT HERE!  I’M GOING TO RIP YOU FUR OFF AND STUFF YOU AND MOUNT YOU ON MY WALL!”

D-Bop pounded on the door for awhile then saw the bike…finally…and went towards it.  “Well, if you ain’t goin to return my money then I’m goin to take your bi…”  D-Bops eyes turned before he could mount the bike as the door slid open.

In front of this gang stood a tall humanoid sized power armor suite with the head of Bo peeking out of it,  “Sorry, not yours.”  The helmet clamped down the eyes began to glow white.  A robotic voice of Bo came out from the suite, “Active Defense 7.”  That said four drones dropped from the ceiling with small mounted SMG styled guns on it.  They made an dipping spear formation all weapons pointed.  Everything else in the shop was pulled into the walls or floors replaced with either armored fortifications or turrets popping up including the area where the bike was.  The cable let loos of the bike as it was locked in place and pulled into a fortifies holding.  The cables whipped around wrapping up around the members as Bo and the drones shepherd them into the now snake like cables.

“WHAT THE FUCK!”  This statement was shared by all the gang members as they were hoisted off the ground. “PUT US DOWN!”  They’re screams and attempts of intimidation fell flat as the air was being slowly crushed out of them.

“Jack in.”  Bo said.  The cables connections moved up like snake heads and with the same speed as a striking snake they jacked into the ports of the gang members.  “Download last images of past 5 hours and send to Rollo’s family and friends as well as the K-Street gang.  Give them the address of the old butcher’s shop near K-street territory.”  Bo wasn’t about to just start shooting things up, the armor was more for protection than anything else.  However, he wasn’t opposed to hacking into data bases and systems to send out a way to make sure these guys didn’t come back.  “Run sleep mode on all connected parties and pull up the SUV Betty.”

Moments pass and the gang falls limp, their vital show living, even if barely it was good enough.  Bo made sure they were secured and immobilized so he could load them into a black SUV that seemed to not need a driver.  “Take them to the coordinates I gave you Betty, spit them out in the back and get home.”  He rubbed the SUV lovingly as the car itself made a set of different sounds that wasn’t a typical engine.  “Be safe.”

The SUV made some sound that made Bo smile as it sped off down the street really not making much of a sound but with speed only some sports and super cars had.

The next day Bo was in his loft over the garage eating some massive mound of syrup, whipped cream, and sugary strawberry pancakes when the the news feed popped up in a smaller in window picture on his TV.  Not using anything more than a hand gesture he expanded the screen and turned up the sound.  “Today local law enforcement found the bodies of 5 members of the Funk Punk Posse decapitated near the old Marvin’s Butcher Shop, an area just outside of the rival K-Street Gang!  Officials consider this and open and shut case though they do seem to have had some port damage to them by some unidentified rigging.  No investigations are following this evidence since they quote “Don’t matter any way so why bother.”  says law enforcement PR department.  Back to you Tom.”  the screen goes back to a woman and man sitting behind a desk with suits on, definitely digital make overs; where they laughed at the last part and the man named Tom said, “Couldn’t agree more.  Up next weather and pollution updates, you may want to rethink that day at the beach.”  The man smile as with a blinking of Bo’s eyes he flips it back to old Loony Tune cartoons…they’re great!

He sate and mumbled to himself though, “It’s not unidentified…it’s a Bo-riginal is all.”  he smiled and laughed as Daffy Duck said “Duck Season fire!” and Elmer Fudd shot the beak off Daffy.