Home It’s in your head, kid… 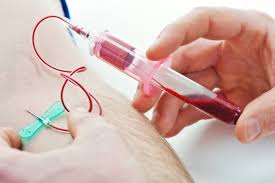 – Hawkins set in the waiting room chair, constantly changing the angle at which he set. Across from him, a woman and a small boy, probably not much older than 4 or 5, set and talked about what was coming up. Hearing something about blood draw, the little boy started crying, as the mother attempted to calm the crying and hysterics. Hawkins continued watching, as the mother looked to him, and then continued trying to get the child to calm down. He got it, and understood, he didn’t much like giving blood either, but it was something that had to be done. The nurse called a name, as the mother grabbed ahold of her son, and walked to the drawing room. Vanishing within, Hawkins could hear the child crying louder, as the nurse then came out and called his name. Standing up, he walked into the back, and set down two chairs to the right of the struggling mom and her kid. They had put off trying to get the kid to keep still to draw what they needed, as Hawkins and the child looked at each other. – ” Hey kid..Don’t like needles huh?..I don’t have much use for them neither. ” – he lamented, as the mother looked down to her son, and then back up at Hawkins – ” His name is Brian..Master Sergeant..Hawkins is it? ” -she asked, while attempting to read his name tape. Hawkins nodded his head, as the little boy looked to Hawkins and then said something to his mother – ” No…that isn’t daddy…its the same thing daddy wears to work..” – As the nurse came out, making the boy uneasy, as the nurse, asked a few questions of Hawkins, security measures, and then placed 3 vials down on the table side, while pulling the rest of the kit out. The boy leaned up, looking to Hawkins, and then to what the nurse was doing. Hawkins glanced over, then raised a brow, and then to the mother – ” If he wants a closer look, if you think it will help, I don’t mind him getting a better look..” – as the mother asked Brian, the little boy shaking his head.- ” I’m sorry Master Sergeant..but he wants to sit in your lap to see..” – as Hawkins looked to the nurse, who was intently checking his left and right arm for a better draw site. Hawkins waved the mother over, and allowed the boy to sit on his lap, while the mother hovered close by – ” Alright Brian..she’s going to do the same thing to me..like she’s going to do to you..Its a little scary,..or maybe in your case..alot scary, but it’s all in your head kid. Tell her to do it quick, and just get it over with, so you can get the hell outta Dodge..Got it? ” – as Brian stayed quiet, large brown eyes looking from Hawkins to the nurse, to the movements of the nurses hands – ” It take a few seconds..and then it’s all over..You have to be tough. Not for you, but for your momma, and other kids around you..They see and hear you start crying, they do the same thing..Monkey see, monkey do, right?..” – as the Nurse looked to Hawkins, then pulled the elastic strap and placed it around Hawkins bicep.  Hawkins followed her instructions, and as she exposed the needle, Brian began crying. Hawkins lowered his head and attempted to calm the kid, tears falling in a steady stream, as Hawkins nodded to the nurse. She inserted the needle, a little slower than he would have personally liked, but at least it was done. She frowned, as she pushed the vial inward, and shook her head. – ” Do your veins roll Sergeant? ” – Hawkins nodded silently, then decided to answer verbally – ” Yes ma’am..on occasion, I’ve been told they do. ” – as the nurse fished a few times, as Hawkins felt a twinge, and a dull pinching sensation. Looking back down to Brian, the kid had grown quiet, and was looking at what was going on, looking up at Hawkins, and then back at the needle moving around – ” Hurt?….” – as Hawkins nodded – ” Yes Brian..it hurts..but only for a short time..”- Exhaling sharply as she withdrew the needle, and sighed, trashing the spent needle in a SHARPS container. – ” I’m sorry Sergeant..I couldn’t get your vein..I’m going to find another nurse, and we’ll try your other arm..” – and away she went. Hawkins held the cotton ball on his arm, then checked, and dabbed the blood away, as he pulled it away, allowing Brian to see. His eyes grew wide, like he was going to start crying again, yet didn’t. Another nurse returned, as Hawkins pumped his other fist, as she checked his vein and marked it with a small circular straw. Revealing another needle, she warned him – ” Big stick Sergeant..” – as she punctured his arm, as Brian looked on, worried as ever. Another nurse, dressed differently, approached the mother, and the two talked in hushed tones, before she beckoned Brian to join her. Brian refused, looking on as the nurse managed to get a good “flash”, and began filling vials.

Hawkins looked to Brian, and then his mother, seeing if she could convince him to lay his arm out over his. After coercing him for a minute or two, he reluctantly did as he was told, as he grabbed onto Hawkins other hand, clutching it tightly. Hawkins felt his features soften, feeling the small hand tighten on his. Coaching Brian, as was his mother, the other nurse felt along Brians arm, after showing she had no needles, and found what she was looking for. Placing the elastic wrap around his little arm, Brian looked like he was already about to panic. Hawkins held his arm firmly around the boys chest, as the child held his hand. The nurse was quick to grab a butterfly, and prep a vial. Hawkins pulled Brian’s attention to something else quickly, as the nurse used that chance to get it down. Brian screamed, as Hawkins almost jumped, feeling the large knot in his throat swell, as he attempted to swallow it back down. Luckily, she hit the first time, and was pulling blood out into the vial, and pulled the needle from his arm, quickly applying a band aid. Hawkins was relieved as was the mother, or at least she looked it. Thanking Hawkins profusely, she pulled Brian back into her arms, as she coo’ed to him, telling him how brave he was, and how he had earned an ice cream cone from the Commissary. A smile was brought to Hawkins face, as he waved to the child and his mother..

Hawkins would later learn, the child was there for the beginning hardships of being diagnosed with a form of cancer. His misfortune with needles would just be beginning, pending on how his parents handled it.