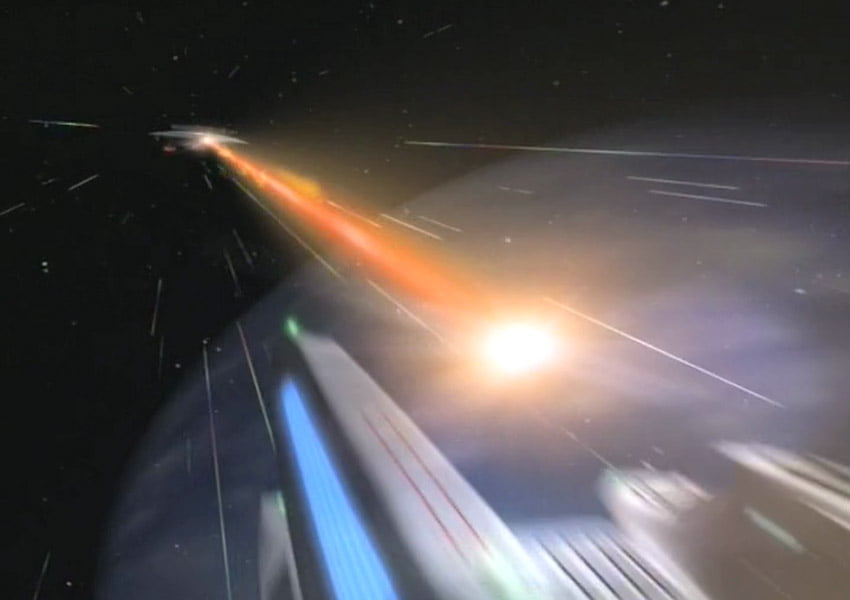 On a ship that hadn’t been named yet, Ensign Torres sent a scrambled subspace communique to an unidentified agent to the Sol System. Within it, she gave her report- listed a number of violations, concerns and suspicions regarding the unauthorized prisoners and possible maltreatment. No proof as yet, and not likely to get any.

Her mission had come an abrupt ending and as soon as the message was sent and it’s response received, she was packing her few belongings into the standard issue swag. It was obviously wise to travel light. The framed photo was lain atop the folded clothing. So what had she learned?

That the crew of this ship had very poor and chaotic leadership, has serious discipline issues, especially among the officers, a flagrant disregard for Starfleet policy and procedure and almost like the situation of Edison, being so far away from the values and influence of Starfleet had resulted in their corruption. It was anarchy and not one of those officers deserved to wear the uniform. The rot had gone deeper than was suspected.

Her skills had told her they were suspicious of new arrivals, with some, to the point of paranoia, uncooperative, completely intimidated by someone that was merely representative of a Starfleet moral code that no longer existed upon this vessel. And- above all, they were hiding something. The hero was locked up tighter than a bank vault but the Captain leaked unrelenting emotion like a bucket with a hole and that was how Torres had learned about the prisoner.

It was all too distasteful.

Under orders, she took her swag and made her way to the flight deck. As the hatch opened she saw three Danube class runabouts. There was no crew. No engineers. Silence but for the gentle hum of the cooling devices of the fusion reactors. 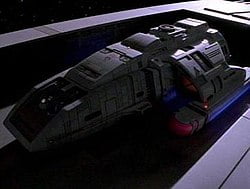 Looking along the line, she smiles briefly at the banner of the farthest and makes her way to that. It was almost as though it was mean’t to be. She boards the USS Okavango- flicking switches and brings light surging into the gloom. Locking away the swag, she flicks switches on the flight panels, they also burst into life and she feels the mild vibration of the fusion core clearing the exhaust.

The hatch closes with a hum. Fingers fly over the controls, a brief smile. It had been a while but she really did enjoy flight. Soft hissing as the cab is equalized and life support thrums into life. A few moments and she was flashing green to go.

The massive doors of the flight deck started slowly to open. Only at this point, did the alarms upon the “unnamed ship” start to echo through the comm. Unauthorized. The doors heaved to a halt. A chuckle, she couldn’t help herself, a contact with the ships computer, adding a code into it, circumventing the rather rudimentary security protocols quite easily. It was, after all, her primary training.

Once more the doors started to move and the darkness of space was revealed to the ensign. The comm was going crazy. A high pitched voice was squealing into it. He didn’t sound Federation either- so really, she didn’t have to respond. She flicked the comm to mute. Ahh, better. With that, the runabout roared into life, and puts out moving ahead. And then- she is clear of the vessel. 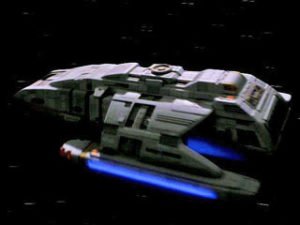 She flicks the comm and hears the chaos of the bridge, that same squeal telling her to “stand down! Repeat- Stand Down! That is an order!” The runabout yaws momentarily and is soon back on course.

The comms headset is placed upon her ears and in a voice that is smoothly detached and professional states “That’s a negative, Bridge. Just obeying orders” and then the comm is flicked off for good.

Suddenly, there is the flash of two phaser blasts across the bow.

“Oh, you did not just go there!” she mutters as her hands fly over controls, shoring up any potential breech in constancy and placing all available power to the aft shields.

A few seconds later, and the whole craft shudders as a blast hits home. They were trying, not only to destabilize her and leave her floundering but they were going for the kill.

“Figures” she mutters, hitting a button and the fusion core blasts forward into the deep darkness of space.

“Shields at 80%” comes the robotic female voice of the computer.

Well, if they were attempting to remain in deep cloak- those phaser blasts would have lit them up like a beacon! Someone no doubt reminded the Bridge of that and there was no more aggression, instead she plotted in the heading and the craft would turn about and then disappear leaving a trail of infrared plasma in the runabout’s wake. 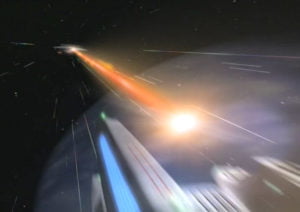 The shining gleam of the planet- Hellifyno, a corona created around it’s profile as the light of the sun hits it’s surface. The runabout would do the rest, the computer had already identified a landing in among the planetshine. Now- she just sits back and allows herself a deep sigh of relief. The shields come down to filter the brilliant light of the sun, turning it from a gleaming white into a darkened green, as the craft moves into it’s light path.

A few hours later, the runabout had juddered to a halt. The whine of the wind down of plasma exhausts soon returned to the dull hum of the cooling systems. The filters were up. Comm had reported ambient atmosphere, a mild 23.c, There was movement about the runabout.

The Danube class was a useful vessel. Small, compact, too small to be able to be detected by standard planetary radar systems however would have produced a blip upon a satellite grid that would have appeared nothing more than a piece of space junk entering the atmosphere and as quickly as it appeared, it was gone.

It was also a small life support pod, was quite comfortable aft, with a couple of bunks and recliners. Torres had found the medical and general tricorders, but nothing for engineering so on a wing and a prayer, she hoped nothing would go wrong. Armed with a phaser and the general tricorder, she finally opened the hatch and breathed her first planetary air since she left Earth.

The recycled atmosphere upon a star ship was always so dry, despite the humidification of it, it tasted of nothing and smelled of less. Like everything else, it was strictly controlled by life support systems. This- this though. Torres draws a deep breath into her lungs.

Cool, fresh, the scents of the meadow that she had alighted in. It had recently had precipitation, the mingled aromas of organic green, water, petrichor. A bright smile as she saw the resemblance to Earth was uncanny.

The ionosphere creates an azure blue above her, the foliage of lush thigh length grass, delicately shimmering in the breeze, was a riot of color interspersed with meadow flowers, and strangely, a genus that looked like a violet poppy. A sweep of the tricorder as the bright lettering appears upon the screen telling her that the only lifeforms in the vicinity were birds and small non threatening creatures.