Home Just one of those days…

Just one of those days… 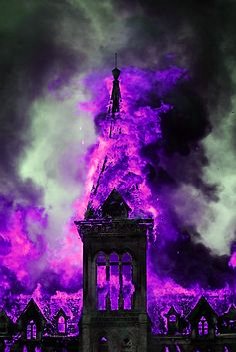 ~ Somewhere off in the world of Hellifyno ~ 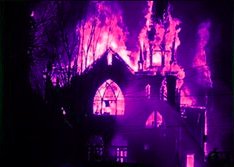 Dawn was incoming.. The soft glow of red and orange shown over the crested hills, dotted with cedar and evergreens. Everything was still mainly covered with the shadows of night, but certain spots would be brightened and enlightened from the linear streaks from the rising sun on the horizon.

That day was just another one of those days. One that filled the young phoenix with rage, drawing out those angry flames. Currently, the raven haired man was sitting atop a turret on a crumbling building.. Ash and smoke choked the air and was resonating upwards to the sky above. Now, the darkened clouds were starting to become visible with the added light of morning. Lavender flames licked up everything in its path. From the wooden rafters, to the flooring, to the furniture in between. The abandoned church would be a pile of rubble by the time the sun had completely shown its face above the trees.

Crackling and sizzling soothed Niko’s mind and the smoke strengthened his lungs, putting him at ease with the comfort of being near the inferno. It always felt good to burn shit. Especially large buildings.. But things of beauty and intricate architecture were his favorites. To see something that had so much work put into its creation and to be admired by many.. Only to befall his wrath and fury.

His eyes glimmered with content from his mischievous and harmful doings. There had been people trapped in the church.. Families, priests, monks.. But it was now empty. The remaining disciples had fled from the disaster, and the unlucky few that had been caught in the flames had suffered through blistering skin and bone melting temperatures. It was close to that of a sun.. That’s what boiled inside of the phoenix. An insatiable desire to wreak havoc upon the world. Regardless of if there were victims or not. Monuments, houses, shops, farms, statues.. Nothing would be spared if he wished to destroy it. It was far too hard to have anything convince him otherwise. Yet.. There was a lingering memory of that cool caress from the touch of that mysterious woman, Azura.

Would she look at him the same if she saw the way the inferno devoured the holy grounds? The way it stripped the mortals of their flesh and ground their bones into ash? Could she stand to see him enchanted by the way that the lavender tendrils forced bloody screams of pain and agony out of the innocent civilians?

That was something that was bugging him. The opinion of that woman. Gritting his teeth together, he released a puff of grey smoke from his lips and flicked a broken chunk of brick off from the edge he sat on. His legs were swinging to and fro, lightly tapping against the column and arched window that sat just beneath him on the turret. He did wonder what had brought this urge to bring the church to the ground.. Had it been a rebellious act towards the soothing cold that the woman had given him? Maybe.. It did make sense, for him to feel like himself and to try to shake off that cool sensation.

More snaps and pops settled around him, charring wood and splintering stones. He reached up and ran his hands through his hair, brushing back those unruly tresses of ebony, trying to give him something else to think about. His violet eyes scanned the area below him, making sure that there were no loiterers. That might might have tempted him to try a few other things.. But he felt what was done is done for now. Satisfaction entangled his savage heart. There was nothing more to be waged here, so with this in mind, his body flashed and surged through the sky. Now taking form of the large avian with his limbs lit with the same lavender flames that raged below. Otherworldly wings flapped, scattering embers around him as he flew off to entertain himself with something else. 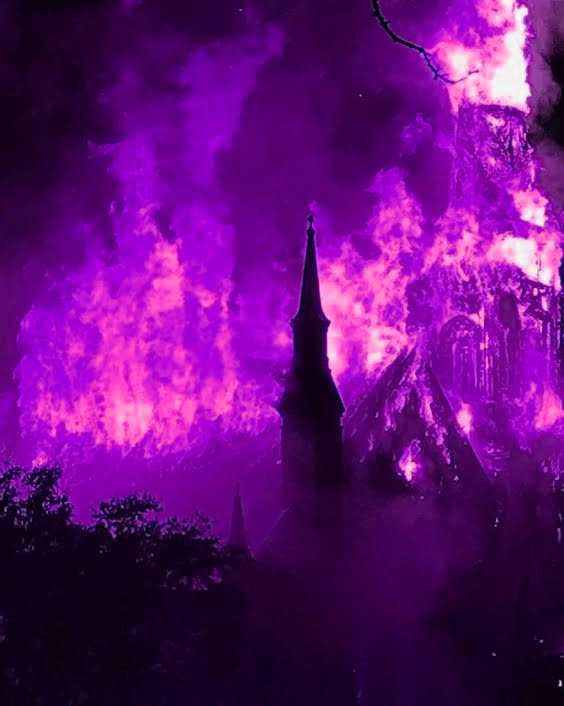