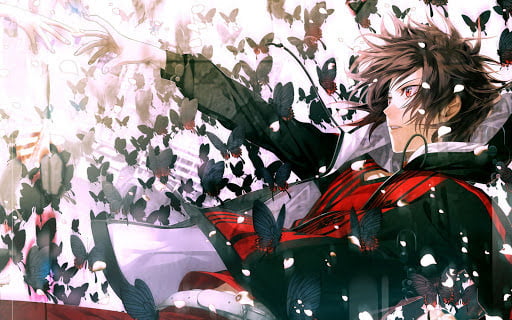 Andrew was born to Aaron Pinkadow and Amelia, as the Magicial Of Obsidian and Shadows, on June 10th with Alida, his twin sister

Andrew had a very close relationship with his family for the first 6 years, till his father’s power got to his head, he was angered by my newest sister, Abigail Skymoon who’s birth caused the flooding of Kasea

Then his father wanted a another son, however what he got was my youngest sister Mikayla Skymoon, which sent him into a blind rage around 2 months later on July 11

He would murder my mother, throw my sister over board and tell me that,  I was gonna be a God Of Hellfire apprenticed to the God Of Nightmares

Over the years I would do his dirty work, both of us trying to track down Mikayla but somehow she had been hidden, so I evenutally was pulled away from my father by his new partner Clara

She would become the mother figure I needed, evenutally I would have a family with Mia Pinkadow, we tried to get a Netty but she died of a miscarriage

Then came Natalie, following the tradition of one child in the family

My Father would evenutally tell me to kill Mia, I didn’t so he sent some of his other pawns to do it for me, they took Mia’s life and then told me if I didn’t track down my sister and take her and her husband out, they would kill Natalie

So I did as told, however I also forced Justice upon myself, which in turn created a new entity who I don’t remember to this day

6-7 years would unknownly go by, then I would be resurrected by my younger sisters Abigail, Mikayla and Courtney

They brought Mia back to but she couldn’t hold on, ending up passing away, then me and my sister went on a search for my daughter and niece

We had lost Mikayla to one of my father’s assassins, however it didn’t kill her right away, so that’s where he fell short

As time progressed, I got to know her family and I would help deal with her husband the best way I could, I would even get a girlfriend so Natalie would have a mom, but I later broke up with her once the war began

To end the war and give my daughter what she wanted, I sarficed myself to save her mother and my father’s vitcims

Years later, my aunt would swap places with me to hold my father down from ever rising again, I became the new Yin and Yang, I’m now comfortably back with my family even though we lost Abigail only days after I came back