Home Look Into My Eyes

Look Into My Eyes 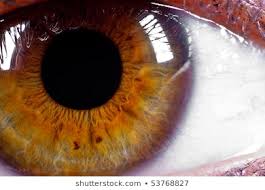 Sitting cross legged atop the table which was littered with maps, Mira stares intently at the standing Norrin. He didn’t look happy with her, at all. His arms are crossed and his jaw keeps twitching like he was flexing and un-flexing his teeth behind tightly closed lips.

Pursing her own, she huffs an exasperated sigh and lets those gold eyes of hers roll up into her head before returning her stare to him. He wasn’t budging.

No she did not just call him a pussy! Grumbling with one last grind of his teeth – he unfolds his arms and throws them in the air.

He places both hands against the table on either side of her crossed legs. Leaning in towards her – he stares directly into her eyes. With laser focus – he notes how she almost flinches back from his close proximity. But she doesn’t move as his breath disturbs a fiery tendril against her delicate – tanned neck. One more intake of breath and he lets go.

Once he makes the briefest moments of eye contact – he has her. His hazel eyes would draw the pupils into his own. Lock in the gaze to where she would be unable to look away. Her mind would go completely blank. A void – you could say.

“Mira. Listen carefully.” His voice is deep and smooth. The voice he uses to seduce. Hey-it sometimes works. Anything that helps his trancing ability to better move along the subject.

She wanted to see it for herself. She had been bugging him for days now. Grinding on his nerves about how she would bet he couldn’t do it to her. Her mind was too strong for his ‘little’ ability. He can’t help but smirk as her expression is now blank. Eyes are hooded with those long lashes of hers. Over those bold- beautiful gold eyes that had fire behind them. Her usually tightly wound brows are relaxed and hinting at the resemblance of how she once was.

“Kiss me.” He orders in a firm voice. He had to prove to her it wasn’t a ‘little’ ability. And this would certainly prove it. Along with a punch to the face- no doubt – once he released her. With his brows drawn down in concentration- he wasn’t happy that this was the only way he could get her to give him a kiss.

A triumphant grin creases her lips when he finally throws his arms up in surrender. Though, she nearly moves back away from him as he leans his palms against the table and is nearly nose to nose with her. Blinking for but a moment, she stares back into his eyes. There is a moment of clarity before suddenly she feels like she is falling away into a void.

The smallest gasp of breath is sucked in before she feels all control of her mind is lost. She can’t move a limb even if she tried. He had her completely paralyzed. All that seemed to exist in her world was the sound of his voice, humming in her head like a lullaby.

However, there was another voice that occupied her head these days. Constantly tugging her thoughts or plans in a certain direction, because she believed the lies it whispered to her. And now it was fighting against Norrin’s influence.

“Mira! Stop! He’s controlling you!” Eryth pushes back against it. Practically scratching against her mind to punch through Norrin’s hold on her. And when he orders her to kiss him, if only the others could hear how he rages inside Mira’s mind on the other side of that void.

There is only a small, vague tingle inside her mind at how Eryth rebels. But it does nothing against Norrin’s hypnosis. And for some reason, there is a relief that a moment of silence is had. A moment that will see Norrin with a bloody lip once she finds out what he just asked her to do.

She finds herself leaning slowly towards Norrin. Her eyes do not close as she presses her lips against his. It is a hollow press of her mouth. No feeling behind the simple action. Pausing there for only a few moments, she slowly pulls back, eyes still lidded as she keeps eye contact with him.

Those full lips of hers touch his. Of course it would be hollow. He didn’t order her to ‘mean it’. That would be a violation against her that he was not willing to do. Sure. He was ordering her to kiss him. But it was only to prove to her how strong his hypnosis gifts could be.

“Good. Now get off the table. Clean off these maps.”

He would watch as she breaks eye contact. With a somewhat amused look on his face – he crosses his arms once more while she would begin collecting the maps they had all been pouring over for the last few days. Locating the hideouts and strongholds of the Slavers. After a few minutes-Mira would pull out of the trance. So he begins to steel himself for the angry cloud to explode.

Slowly she blinks as she is told to stand. Hopping off the table languidly, she then moves around the table, carefully collecting the maps. Halfway through she suddenly stops. Blinking several times she pauses and drops the maps back onto the table. Looking around the room, her eyes land back upon Norrin. Long moments pass before she finally scowls across the table at him.

“You Dick!” She yells. A hand smacks down on the papers.

“How dare you order me to kiss you! Of all the things you could have had me do, ya pick that?! I should have known you’d take advantage! Well, you just soak it up, Ass! That’s the only way you can get me to kiss you and it burns you up something fierce!”

“Burn him! You don’t need him!” The voice sounds anew in her mind. Only adding to her anger.

Mira shakes her head at the voice. As angry as she might be at Norrin, she wouldn’t kill a friend she has known most of her life. More than she has known any other person in the world or in this universe. Checking her anger she closes her eyes while the voice in her head does it’s best to convince her otherwise.

“That’s why I’m going in with you. If we run into some problems I can order them to completely forget they even saw us.” Looking up- Norrin notes how she has her eyes closed and shaking her head.

“Your not going in alone. We have a better chance going in together. I’m against all of it. I’ve made that clear.”

Mira had laid out the plan to him and Gent last night. She would brave putting the collar back on. Brought to the Slavers by one of Gent’s men-who would act as her ‘keeper’. Under the guise that she was brought there to try and get a handsome price. Once inside – she would work quickly to free as many of those captured inside to bring to her side. Fight their way out – while Mira takes the head slaver captive. To find the other strongholds and use him up till he was of no further use. See how he would like having a collar on.

He saw several flaws in her plan. Mostly because she didn’t care if she died trying. He needed her to understand they needed a better plan. One that at least gave them a fighting chance. Norrin was the only one that knew the collar she had made was a false one. It would take some very good acting-and good timing to pull off that she was really ‘enslaved’. Only Norrin could do that successfully. Mira might not like it-but they knew each other like the back of their hands. Knew each look. Each body language that would signal something was going as plan- or that shit hit the fan.

The moments stretch on for what seems like forever.

Mira finally quiets Eryth down. Wetting her lips, she rubs at her eyes and finally looks up to see Norrin staring at her. Sighing, she nods slowly.

“Fine. Fine. Let’s hear what ya got.” Stubbornly she backs down.

She knew her plan had holes in it. But she would at least get far enough to do some major damage. She had to think bigger. Completely annihilate them all. Like she had always wanted to do.