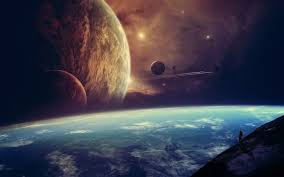 The Video would begin to be broadcasted to the neighboring solar systems leaders done by Dr. Heather Spidercrab

The Planet is like a big sunburn, it is the hotest planet in the solar system but it doesn’t matter much

This planet was offer to the Representative Mr. Clayton Wade and the Empire in which he represents, in the meantime they still haven’t accepted Jadia Bay’s offer

Named after a Norse Goddess Of Wisdom, ruled by Patragoldbe, the Planet is a complete waterworld following after the quote “You gotta face a challenge, if you wanna win a war” -Illy Hadley, July 20XX

They have an Outpost on one of there moon’s

Home To Eos-Gaian likely named after another planet, after the threats of the Voilettes, the planet is covered by many mountains but has caves under the ground able to connect to the other 8 districts

Home to the Iron Legion Empire and Represented by Luna Pinkadow, the planet feels like summer however the planet looks like an iceball

The cities people are very prideful about Benjamin Price, the last iron lord