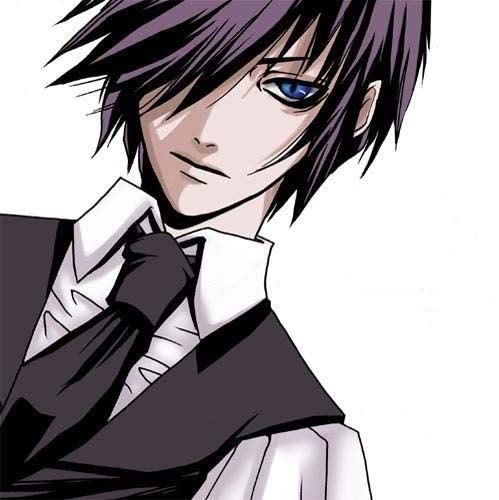 Once a human but now turned into a Vampire by none other then Shadow himself.

Orientation: He believes he should love someone more for there personality then look aka pansexual.

Age: Appears around 21 but is actually closer to 400-500+ as he first met Shadow when they were both pretty young.

Midnight himself is loyal to his friends, family and anyone he really believes he can trust, he might come off as a bit quite at first but when he opens up to someone it probably won’t show as much, he normally act’s calm or collected though, he will also help anyone of his friend’s out if they need him even if it means dropping what his master told him to do. He was a Human at one time but he let Shadow change him into a Vampire as such the bond he shares with Shadow is rather strong meaning he will pretty much sacrifice his life if needed to be just to save Shadow.

Story/Background: Midnight as a child had one day wandered in the woods and had ended up getting lost and surrounded by creatures he later came to know as Werewolf’s, back then he had no clue what they were all he knew was that they weren’t friendly creatures at all, when one of them tried to make a move at him with his claw he had closed his eyes and had glanced away afraid of what would happen next after a short moment had passed however he had opened his eyes as he had seen the creatures dead and on the floor as he had glanced up towards the creature that had saved him that was from all standards not human at all yet somehow Midnight didn’t find him scary at all and instead of running away from him he had thanked the creature, when he was a teenager he had ran into the same creature that had saved him all that many years ago as he now had the guts to ask him about himself, the creature told hid athe was and that his name was Akashi. Once in his college years midnight was walking alone and night when some creature he didn’t reconise at all had appeared infrount of him to this day he still has no clue what to even describe it as it looked like a demon/Dragonic hybrid that had some traits of a Vampire or a human in there which had introduced itself as his older brother which caused Midnight to become a bit confused as he didn’t know anything about this then later he asked his father about this only to find out he did have an older demonic brother called Damian he also had a younger brother called Yuzo however no one in his family even knew they were still alive or if they had died as no one had heard from them in such a long time, that right there began his main goal in life to find Yuzo and Damian as he later saw Akashi he had asked him about a male known a Damian had even described what he looked like to Akashi as Akashi had said “Your going to want to come with me then as he is back at the mansion.” As Midnight had now met the male called Damian who was better known as Raven he later came to understand why he lived there as he followed after his brother’s footsteps and had become the butler to Akaishi instead. They only just recently found Yuzu as Yuzu now also follows after Midnight and Damien a bit.

He also has a mom and a dad but doesn’t know how they are or anything like that as he cut ties with them.

Note: I can rp him back when he was human if anyone would prefer that.

And take this as he is up for RP.