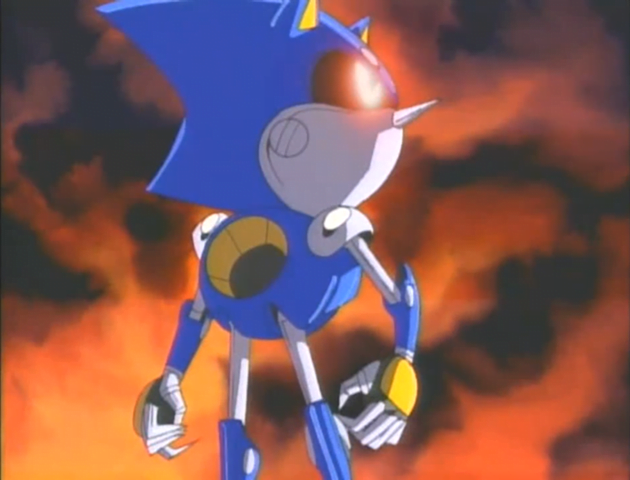 Metal Sonic hovered in the air twenty miles outside of Consequence, his red glowing optic sensors locked on the towering obsidian pillar reaching into the sky. The Mountain Palace of Consequence, home of Augusts Giovanni and potentially crawling with resurrected corpses. The concept disgusted the robot on a level he could not yet understand, but he was not focused on that strange and alien feeling. Today he was focused only on the mission.

Contracted for a Mercenary job, the robot hedgehog was the meaning of professional, analyzing every scrap of data that could be mined to ensure the success of this job. Long range scans were matched to internal blueprints found in local databases, allowing Metal to perceive the layout and structure of the palace, along with the movements of the creatures inside.

The Anti-Proton Thruster integrated into Metal Sonic’s torso charged on with a whine, and the robot was launched toward the towering structure at over eight hundred times the speed of sound. Optic Sensors were practically useless at these speeds, as light began to flex and bend under the unimaginable speeds, forcing the robot to rely on his secondary navigations AI Rebexxa and the sensors capable of reading data at the extreme velocity.

Less than a microsecond before his hull would have impacted the side of the palace, and with advanced warning from Rebexxa’s calculations, a glowing purple-black hexagon energy shield sprang up to take the damage of the collision. Metal Sonic burst through the wall of the tower as if the material had not existed, flying directly through the center without stopping. As he reached the center of the structure, the robot engaged one of the many tech designs stored in his memory to materialize a Disruptor Torpedo that dropped to the floor in the static-y haze of digital matter. Metal Sonic flew the rest of the way through the mountain palace and into a Slipspace portal that Rebexxa opened on the other side, the entire process having taken only two seconds from start to finish.

Just as the blast wave of Metal’s ultrasupersonic flight was about to impact the Mountain Palace of Consequence the Disruptor Torpedo was triggered, releasing a wave of random unstable Mass Effect fields that warped space-time. Everything caught in the wave would be shredded apart by fluctuations in space and time throughout their body. Even the undead that may have survived such an exotic detonation were not saved, for the tearing occuring at the molecular level would immediately set off fission reactions through the entire palace.

There would be no radioactive fallout or even any debris, as the explosion had been carefully measured to be contained to the structure alone. But all of Consequence would would be lit up like a summer day as the mountain palace went up in a burst of light and a rising mushroom cloud.