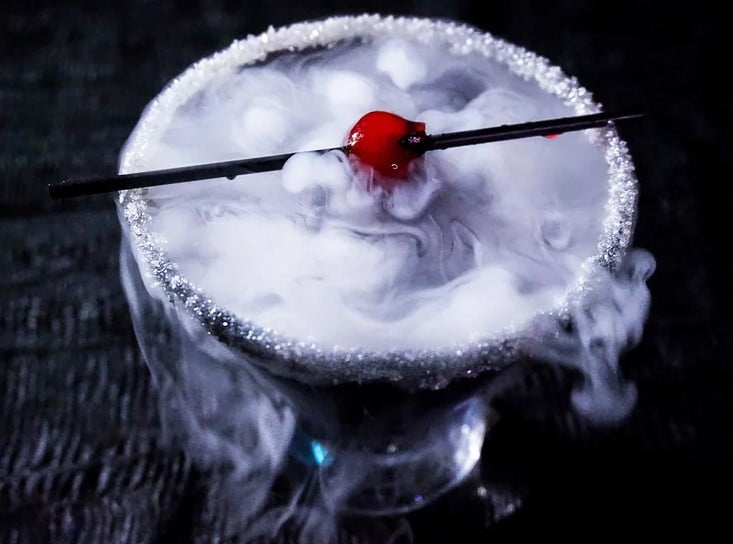 Kirk is already three hours into this bar, and hes witnessed: two knock-down-drag-out-fights, a stabbing between two purported lovers, a brawl outside that left four people dead and a slew of firecrackers/explosions go off in one of the Private Rooms. Dance Rooms. Private Party Rooms. Catch Some Favors Rooms. Spices. Ale. New alien species around every booth. Perfect!

How does he get himself into these messes?

Right Now, however: he’s listening, relaxing, and debating on other issues. Force Stealth was utilized long before he even arrived onto Nar Shaddaa. The black leather jacket, along with his somewhat rumpled black attire remained intact. His boots weren’t damaged, but they were scuffed to hell and back. Reelo’s Garbage Raid, went really well. Too Well. Pending the worker droids and the mass of security guards that arrived at the end. It was that too easy part that bothered, Kirk.

On the other side of the bar, there was a booth, filled with a few smugglers trading war stories. It was smoky, backs were turned, filled over-flowing Ale’s, and phenomenal space tales. Kirk used Comprehend Speech in order to determine what was being discussed. However: Comprehend Speech doesn’t always work in these situations, and certain languages are not always understood. From what Kirk could gather: it involved Pure Sansanna Spice. If he could get his hands on that? They must have a transport? Maybe a freighter? Something fast. Something quick?

And that was when Kirk heard the front door burst open with a mass of storm troopers! Death Troopers! But it didn’t end there! They were coming from the rear of the bar as well! Who could they be looking for? Kirk could teleport out of here? Yet he wants to stick around, to see what happens, to see who they might choose for a bad vacation to their inhumane prison barracks.

Their blaster pistols were leveled to each occupant within the bar. Tense. Quiet. Kirk waited. He listened. After enough time had passed, two Death Troopers seemed to be assigned for each table. And their didn’t seem to be any particular person and/or groups that they were looking for. Odd.

The Lead Death Trooper spoke within heaver intonations, modifications and irrefutable ire towards the Bars patrons.  The Force Sensitives in the bar, were told to kneel, hands behind their head, and to look down to the floor. Any attempted diversion from the order would not be wise.

Since Kirk’s focus was mostly down, facing that table: his periphery angles were soaking up each of the angles as best as possible. His arms were resting on the table, as well. Fingers Splayed out. The Perfect Hair on the back of his neck, had risen up, perhaps even higher than usual? Beer Run. No Stress. Two Blaster Pistols Located for each side of his head. Just two, only two: could it be more than that? Kirk closed his eyes and focused on the power that’s long since settled within him. Force Powers. There wasn’t even a great need for the orb anymore, yet he kept it with him. Handy. Close.

Shots Fired! The electricity in the air, was like another live form…It radiated power, immense power. Not from his flesh. Not from his blood. A single female lay dead on the floor. Shot to the head, brains on the floor. Dark Matter. Maroon Decorations. Bone Matter. Skull Dislocations. Shot to the neck. Jugular. Artery. Blue Female. Matted mess of twisted cartilage, upon a dirty surface.

To Kirk’s surprise, their next target wasn’t him. No. It was an older male, maybe around eighty years old, fair skinned and extremely thin. He had the clothes of a nomad. Long Hair down past his shoulders. Maybe it was a woman? If it was a woman? Her features were brutalized past being chipped/cracked skin, sun-burnt-brown to hell and back and she was leveling her bony ass finger in his direction. “Him” The older females voice was coarse across the landscape, much like frying pans hitting glass and breaking into a thousand pieces, for each syllable. “He……Has…..Another”

Picked Out. Singled Out. Wasn’t exactly in his plans for this trip. Yet his eyes were opened, after he’d turned his body to face the nomad, the one that specifically pointed him out. Singled Out. The Blaster Pistols hadn’t moved from their spot: and directed at each of his temples where he sat.

“Who is this person?” Asked the Lead Death Trooper to the unnamed female/male nomad?

Scratchy, coarse voice rumbled back into existence again, “He doesn’t belong here. Bring Him Back ….With US”

Kirk teleported the rest of the citizens directly out harms way about a mile away from here! Because it couldn’t be worse than this situation! With the bar occupants now gone, the soldiers could rest their focus onto Jim Kirk. Which is what he wanted. If they fired on Kirk? He teleported out of sight, yet remained within the Bar. Kirk removed his Type-2 Phaser Pistol in his right hand and lodged it beside the Lead Death Troopers Head. Wrong move, Kirk! Or was it?

Doppelganger was used to project himself into a number of locations throughout the Bar. Right beside each of the troopers lying in wait to kill him! One, two, three: ten replicas of Kirk with a blaster pistol aimed at their heads. Problem was, Kirk’s replicas shot first! It was a haze of maroon, spraying in and around the walls, to the last balloon. Down. Shot! Random Force Blasts from Kirk rendered most of what was Gitons Bar into a shallow bed of rubble, soot and ashes to the ground. And a certain prisoner, lead death trooper: was the mouse within the snare. Behind what was left of the bar, underground, pocket dimension unfolded around them. Darkness. It crept all around Kirk like an old distorted friend. The old woman was dead, even if she may have held answers.

The Soldier was a hard crack to break, against the bones that broke, that ricocheted across dirt and grime. There were unheard cries for a word called help. None that would ever arrive. Answers were provided though, they were looking for the spice runners in the booth; but the old lady had diverted them to Kirk. An old wisdom lady. She was famous around on Nar. ‘There were whispers that two people have overshadowed the order. You have no place to hide Kirk. Nor Your Wo—-‘

Wasn’t a sound after that. Ash doesn’t say much, right? But now Kirk was on the race to find those smugglers. One of them even sounded as if he was a smart ass, at their table, their booth. Maybe he’d find them on Nar Shaddaa? Maybe he find them on Coruscant? Either Way: It’s Time To Leave…