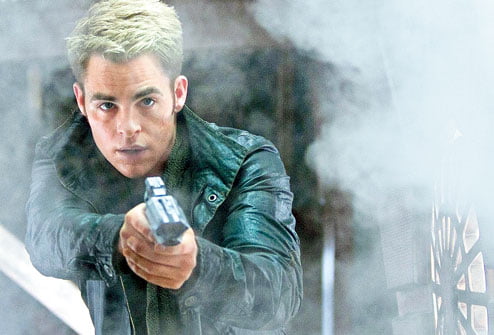 Quietly: Kirk stalked the insides of the Reelo Baruk’s Garbage Processing Facility. Within Kirk’s grasp, the heavily modified Section 31 phaser pistol, is held within a dual-handed-grip. Kirk is dressed in Black Attire. Force Stealth is now a constant in his life. As for the barriers into the facility? Pass-codes were hacked with ease. The ten armed guards that he’d encountered, were slid into the available trash compactors on the first floor. Blood on Jim Kirk’s hands was nothing new.

Next: Kirk sent each of the trash compactors into life. One such machine had a sign on it that read, ‘Under Repair.’ Kirk removed the sign and chucked that into the opening of the compactor. From there, he locked each of the machines gears into the ON POSITION. After that he used silly pud-die, around the gears and secured the C-4 explosive materials to the silly pud-die. Wires were tipped, and tripped, for a fire-works display across the entire block. The engines for the compactors were loud, and caused the entire facility: to shake, to rumble into a chaotic mess. There were shouts from up above IN the supervisory office, where the men were scrambling for answers.

“SHUT THAT MACHINE OFF!!” Came the booming voice of the supervisor, “WE CAN’T HAVE THAT SYSTEM OVERHEAT!—”

More misdirected volleys of yells from the supervisor resumed within the chaos from the floor up above Kirk. Apparently the disabled compactor was disabled for a reason. Good to Know. That was Kirk’s cue: to jump down to the first floor, to put his back as close to the wall as possible and to raise his phaser pistol towards the ceiling in a dual-handed-grip.

What does Kirk have? Maybe ten minutes to pull this off, before the whole facility goes boom? Certain information was provided to Kirk about a ah. His eyes widen, when hears the footfalls of more guards rushing towards his direction. There was only one real door that he was searching for, which would lead Kirk directly to the sub-basement. The Prison. The Artifacts Room.

Artifacts is what he came here for within this underbelly of planet Nar Shaddaa. But he also has a promise to keep to save as many lives as possible. Rumors had spread that Tarre Vizsla’s original dark-saber was located within this crap facility. Vizsla was the first Mandalorian to ever be inducted into The Jedi Order. The dark-saber is to be auctioned off within the Invisible Market on planet Coruscant by crime lord Lannik Racto. Racto, Kirk heard by chance: that he has a factory for War Droids on Coruscant. Death Droids, to be precise. The same type of death droids that he’d faced off against within the Inquisitorium Outpost, within that Ordeal Room. One item leads to yet another fall. Kirk also had the facility scanned for extraneous prisoners within the sub-floors below, to ensure that no one would be left behind. Nothing. No Heart-beats. No Force Elements.

With his free hand, Kirk tossed out the marbles within his pocket dimension and shot them to the floor, before the running guards. The marbles, about forty of them in all: flew out of his grasp and into the air, skimming to the floor and lied in wait for the guards to arrive. Meanwhile, Kirk teleported past the Prison Door on the first floor and onto the last basement level of the crap facility.

The last basement level, wasn’t where Kirk needs to be located. No. There was another hidden level underneath this last floor, and/or side-walls. Although even from down here, (two floors down), Kirk could hear the whining of the compactor engines screaming within their increasing torments of electrical pain. Grinding. Pitting. Squelching. For a release that would never spare them.

Kirk held his open right hand towards the floor, in an effort to scan for that Force Energy, trapped within its walls. Pace. Scratches of dust, and must; crackled under his boots, for every step. If the dark-saber was going to be anywhere, it sure as hell was going to be HERE. So far, no friendly recoil of a force meeting force environment occurred. No bounce back of the neural hand-shake…

Upstairs, on that first floor: the marbles caused the guards to trip, to yip and land upon their asses in a perfect unison swan dive. The marbles, within their swelling colors: flew back into the air and returned through the guards prone bodies, right through the flooring and directly back into Kirk’s side pocket. A slow, burgeoning fire, after their entrance: began to swindle through the guards bodies and across that first floor below. The machines, within all of their screaming glories: were eliciting black smoke, in through every open crevasse of the crap facility.

By now, Kirk was standing near the right side wall, farthest from the stairs. Kirk didn’t take the stairs, because he’d teleported down from that first floor. It was here that the neural force hand-shake was completed. The dark-saber was hidden within the wall made of stones and unusual materials. Kirk stepped back, about ten feet from that wall, and used Force Blast, to extract it from it’s prison. The wall crumbled, but not without consequence! It also brought the attention of the remaining guards from upstairs to find their way to the broken, yet formerly empty artifacts room. Jim Kirk was the only one down there, still scrambling to get his feet: with all of the soot in his face, the cuts across his forehead and the measuring of his breaths, after the blast. Kirk grabbed the dark-saber within his right hand grasp and sent it into his hidden, pocket dimension for safe keeping.

Droid Fire Reigned from the stairs towards Kirk!  Immediately, Kirk yelped in pain from the first shot: raised his right open hand towards the stairs slash droids. This action would send Pure Black Force Lightening, directly out of Kirk’s open palm directed to the droids! The droids would get it first, in a combination of Force Push: to level this building from the bottom to the top of the facility!

The Pure Black Force Lightening, triggered off the rest of the explosives within the facility, causing the building to erupt into flames within nano-seconds. Blast, after, Blast, after Blast: enveloped the entire block for a number of days for Nar Shadda. Good Riddance.

But maybe Kirk wasn’t going to give this dark-saber back to the Mandalorians? Maybe he’d take it to that Jedi Temple, (known as), The Imperial Palace, on planet Coruscant? No. Maybe he’d keep this item for himself? Maybe he’d replicate them first? Swig. Now, situated: somewhere within Giton’s Bar on Nar Shaddaa, enjoying a cold Dorian Quill, (Space Whiskey). Swig. Of course, Kirk wouldn’t find any trouble here, now would he? One of most crime filled bars on Nar Shaddaa.