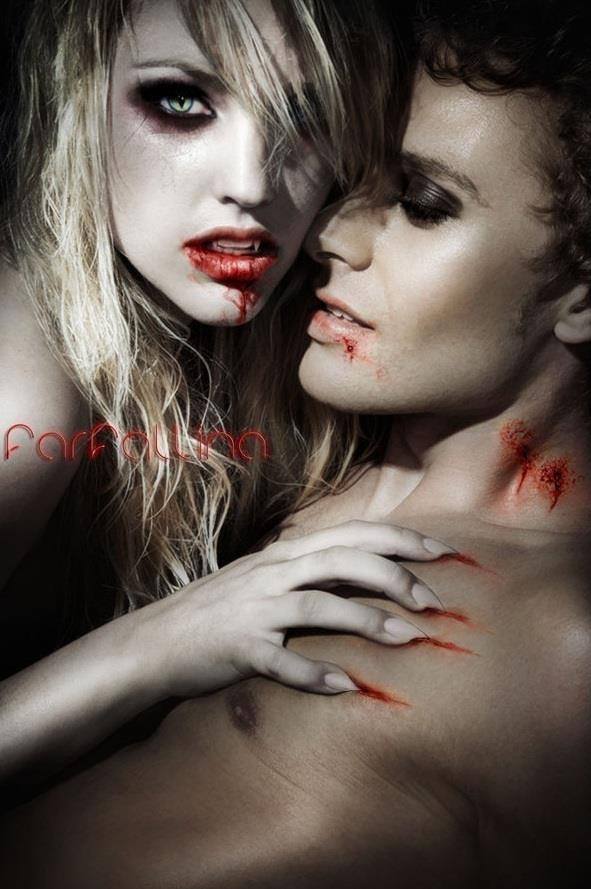 She left the building having been in the office all day dealing with her new shipment of slaves her patience was done and her hunger was fierce. Those nasty little bastards treated their slaves like garbage most were starved others on the brink of death. She couldn’t even get any use out of them until they were all healthy and looking well. Satan forbid she put one of their weak disgustingly rotting bodies on display under her name. The thought just fueled her fire.

She pulled out her phone as she slid into the back seat of her car. She scrolled and scrolled through her list of contacts. Who was disposable and would get the job done? What was she looking to sink her teeth into tonight? Picture after picture name after name until she stopped on one she grinned as she selected the Image typing out a simple phrase.

They knew the drill. They have serviced her before Though these two in particular have been making deals with rivals and taking their own cuts behind her back.

Tsk Tsk her slaves should know better by now than to try and betray her.

She pulled up to her house fifteen minutes later. Climbing out of the car she went inside making her way straight to her room, knowing they would be waiting for her.

She closed and latched the door behind her before turning around allowing those glowing silver eyes of hers to scan over the two naked bodies waiting within those black silk sheets of hers.

Sadly they would be burned by the end of the night.

She moved to the end of her bed before she began to slowly remove her cloths. First her heels kicking them aside, then her knee length skirt fell around her feet in a pool of fabric, her fingers moved to unbutton her silk blouse leaving her in just a lace thong. All the while her eyes scanned over her meals for the night.

William was a good looking man. Part shifter he stood a bit over 6 foot tall with shaggy golden hair. His eyes brown with a golden hue to them. She has known women to get lost in them. His build was perfect for his height, his muscles gleamed, his creamy skin a sharp contrast against her black sheets.

Mary lay a few feet away from him the gap in the middle was left for herself. She moved to crawl up the bed pulling the sheet off of Mary’s body before she slowly kissed up the woman’s long golden tan legs. Her glowing eyes moved up to look into Mary’s emerald green ones. The woman wasn’t as curvy as most though she was beautiful with her full lips, golden skin and long chocolate hair.

They usually worked together, bring in more clientele though you would never see them together outside of work. Guess when there is no chase there is no fun.

Her lips traveled up the woman’s body slowly. Leaving gentle bites on her thighs before she slapped her legs apart slowly running her tongue up the woman’s inviting warmth before she closed her mouth around her clit sucking it gently before letting go and continuing her trail of warming kisses up her body. Stopping at her breast her tongue snaked out to flick her nipple before biting it gently. Receiving a low moan from the woman she grinned moving up to capture her lips kissing her deeply slipping her tongue past her lips. Allowing them to dance before her fang cut into the woman’s tongue dripping blood into her mouth. She sucked on her tongue for a moment before releasing her running gentle fingers along her cheek and down her neck receiving goosebumps from her touch.

She glanced over to William for a moment he was biting his lower lip watching the women tease at each other. She could feel the lust build in the room.

She reached out sliding her hand slowly down his chest over those abs of his until she reached his member. She wrapped her hand around it slowly beginning to work him. Not building up speed just toying with him. She leaned in taking that lip of his into her own mouth biting at it gently before sucking it into her mouth for a moment. She built up speed pumping him faster until she received her moan from him then she let go releasing him she moved leaning back into her pillows.

“Who is first?…” Her voice so caressing so inviting. They both looked to her with lust filled eyes. She seemed to have an effect on people when she played with them.

William was the first to move. He pushed his body to her his hands snaked out to grab her bare breasts. He groped and squeezed them before he tilted his head to the side moving his body to angle with hers perfectly.

She leaned her head down kissing at his neck searching for the perfect beating vein to bite into.

Mary moved down her body sliding her lace thong to the side as her tongue began to kiss at her warmth, taking William’s length in her free hand she slowly worked him as her tongue slid out penetrating into the warmth before her.

Mary received a low moan before her teeth sank deep into William’s neck. She did not waste time her hands snaked out tangling into his hair as she drank from him, holding him close his hands still massaging her breasts. She did not control her hunger she let it take over taking long deep pulls from the man’s body.

She felt his body stiffen beneath her hold and Mary’s mouth leave her for a few moment. It must of been a dry week for him.

She drank until the man was almost dry. She pulled away her tongue snaking out to lap up the blood. She rolled him to the side letting him revel in the ecstasy that her saliva pumped into his body.

She grinned down to Mary as she sat up and motioned for her to flip over onto her back. She did as she was told.

“Good Girl” She purred out as she slid her lace barrier off and tossed it off of the bed she leaned forward crawling down the woman’s body leaning down nipping and kissing her way down to the woman’s wet warmth. She grinned dipping her head down her tongue flicking over the woman’s clit before dipping deeper to slide into her.

Mary moaned into her own warmth receiving a gasp in response as she began to roll and grind her hips against the womans mouth.

She moved her mouth to the woman’s inner thigh biting in deep with her fangs she began to drink. As her saliva began to fill the woman with ecstasy she slid a single hand over moving to slip her fingers inside of the warmth. She pumped her slow and agonizingly teasing her clit with her thumb. Her mouth pulling mouthfuls of blood from the woman as her hips moved against her moaning mouth. Feeling the woman tighten around her fingers she moved her hand faster and harder as the warm nectar began to run down her fingers.

She pulled from the woman’s thigh with a loud feral growling moan of pleasure as her nectar dripped into the woman’s mouth.

She moved herself from Mary. Looking between the two licking the blood from her lips as she watched the slow shallow rising of their chests. They were alive for now though very weak.

She moved over to William first since he would be the first to recover. She ran a hand up his perfect chest gripping his neck.

“I thought you knew better….” She purred into his ear before her claws dug in ripping across his neck leaving deep unhealable gashes. She pulled her lips from his ear kissing his cheek softly before she watched the life drain from those golden brown eyes of his. What a pity to lose such a specimen…. Both of them.

Her attention turned back to Mary writhing in ecstasy her golden skin pale from the blood loss. She moved back to the woman kissing up her neck.

“You can never say no….. Can you,,,” She whispered to her before her fangs dug deep into her jugular biting out a chuck she ripped the chunk from her neck spitting it out she turned back as the woman stared up at her. Those emerald eyes were so full of rage she grinned as she watched the woman’s light fade as well.

She climbed from the bed pulling on a red silk robe she headed to her door. Licking the blood from her mouth and the nectar mixed blood from her fingers she left her room leaving the mess for her servants to clean. Her silver eyes gleamed a grin on those perfect red lips as she headed for her office. She had positions that needed to be filled…..