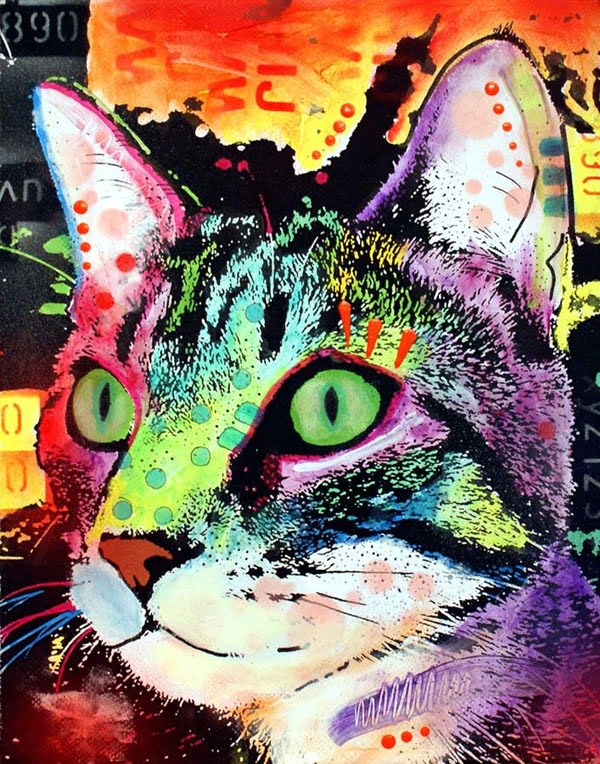 Paws and Grenades.
Tales from the Black Cat of Misfortune.

The streets of the Consequence were as busy as always, with cars passing with merchandise, contrasting with exotic animals dragging crates of slaves, television screens and large posters showing that somewhere out there always was a better offer. The boots and high heels clanked against the asphalt, both of worlds – adventuring and night time met together, echoing the cacophony of sounds, added by ships passing the buildings to land at the star port, keeping the space trade as ever alive. Bustling and alive, and of course filled with alleyways, that held unwanted produce, discarded easily, since the existence of some establishments has gradually lessened the sense of value towards mundane things like food and drink.

Within one such alley way, Milo, a black cat with blue eyes was sitting, sniffing the leftovers, before glancing forward, glancing at the three men surrounding a woman. A classical trope, the protagonist meets antagonists on a very obvious scenario. Better make this count. With soft touch to the cobblestone, the cat neared the three men, but since it was just a feline, they paid no mind to the mammal. “Well if you don’t have any money, let’s put that mouth to good use.”

For once, the cat, sat down, and eyed the three, and seeing that the woman had decided to choose her life over the pride, kneeling, and nodding. “Yeah that’s right. You check our backs.” The bald, koi carp tattooed man pointed at one of his buddies, who did indeed turn to check if no one was coming in the alleyway.

“Oy, there is a black cat down here!” The scrawny looking man with a beanie and your classical blonde junky goatee. The grey eyes narrowed. “Wasn’t a cat black bad…”

It was then when Milo had walked by a board resting on a wall, and with a light kick of his hind leg, the cat made the planks topple releasing the butterfly effect, as the metallic staircase connecting the balconies began falling with the metal grid, catching the drying laundry and couple plant puts, all of which was tumbling down, to sides, making the strings fall on the three bandits. And as one’s misfortune was another’s fortune, the woman took the chance to scream and run towards the main street, escaping the alleyway. “What is happening?” The more bulkier man with a darker tone said, as he ripped bloomers apart.

“It was that cat.” Said the Shaggy looking guy, and appeared from the pile of laundry. However this was not enough of a lesson, from Milo. Standing there like an idiot, the cat glanced at what was happening before it’s eyes. The man the said. “If we can’t have fun one way, we gonna have it another.”

The bald man smirked, and stood up, while the others recuperated. “The little shit wants it.” The man spun the knife in his hand, and licked it in the most cliche manner possible, before crouching down two feet away from the creature. “Hey, Shaggy, do you think it will land on feet, if there aren’t any?”

The scrawny man smirked, and rubbed the small beard, speaking out. “I don’t know Robs, but I think we will find out soon enough.” As he said that, Milo had finally understood the trouble he was in. As the three shadows leaned over the cobblestone the cat took few steps.

Soon enough in the black street the black cat ran, as from the alley way three angered man were running pushing an old lady carrying apples. “Come back you little shit!” Robs yelled, as they ran, pushing the people aside. The cat was quick, however, it wasn’t quick enough to fully get out from the site. People glanced at their feet, as nearing the more central part of Consequence, the crowds also thickened. “Out of my way!” The bald man shouted, pushing a teenager. In shock the people were slightly baffled, uncertain as what to do. Even the protective clone force of the city was a bit delayed, since it all happened so fast.

Soon enough the cat jumped over the street, where couple trucks were going, to deliver some good old export from space. It was a moment, when the jumping cat glanced with blue eyes, flying over the windscreen, while the fat man, who was doing a delivery for, possibly, All Corp looked at the cat as if it was the most unbelievable thing. Only then did he figure out that braking was an option, and heavily tilting to the side, the car braked just in time to let the back of the truck to slide towards the three stunned bandits, as people screamed and ran back.

“Get back, boss!” said the heavier looking man, and pushed Shaggy and Robs aside, whilst a big strut, emerging from the inner structure of the car pierced the giant’s lung, making him cough blood. It should have ended just at that, but the kinetic force made the car slide further, completely obliterating the pierced man’s legs, turning them into nothing but mush.

The driver did hit his head, but as there was an impact towards a nearby stand, the glass soon fell past the cheeks of the old man. At the moment when the impact released the resisting energy from the steering wheel, his head flew back, only to reveal his throat to a greater glass shard coming from the destroyed booth of newspapers showing the upcoming ball, that was somewhat expected.

Once it had transpired, the cat had already found a safe place on the balcony, as the blue eyes glared at the two remaining robbers, who actually wept for their stoic comrade. “Hammer!” Shaggy shouted, and Rob glanced at Milo, who was gently waving the tail in common manner.

“You little shit! You will…” But then the most irritating smirk formed on the cat’s eye, as Rob came to a small realisation, that there was something that the cat saw, and he didn’t. Then he felt it, a small object hit the bald man’s foot, and he glanced down, seeing that a delayed grenade had lost the safety mechanism. “Eh?” He blinked.

And soon a massive explosion erupted in the city centre, sending parts of burning plastic and human remains of the three robbers and the driver, splattering towards hanged laundry, messing it up. Metal struts were hitting out the windows, while a large burning rubber wheel was rolling down the hill, making more shouts appear. Glass from the wind sheet did hit two fleeing pigeons, as they fell face down in a plate of food from a nearby diner, that a man had left hastily to run from the accident that had occurred. And to top it all off, the knife, that Robs was holding flew right past an officer’s ear, as the force of Consequence had finally caught up with the situation and appeared, making them stop to see if there was anything else to be wary of.

But there was nothing but the aftermath of the situation. Nothing more than the four dead bodies and witness reports of a black cat running over the street. The said cat, however was nowhere to be seen. Milo had lost the interest and scurried off, because he was a cat, and cats walked where they pleased.