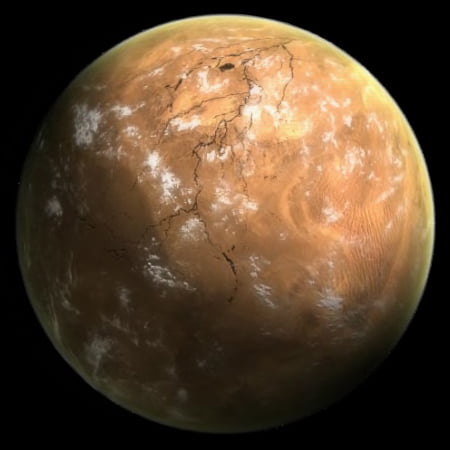 “Leave your droids outside. You don’t want Wuher on your case.

Keep your blaster holstered! Why ask for trouble?
Find an empty table or barstool. Crowding other customers will only end in tears.
Be friendly. Buy a drink for your neighbor at the bar.
Applaud the band—even if they’re way off-key!
Make pleasant conversation and try to laugh at bad jokes.
Tip the bartender, especially if you make a mess.”?Mos Eisley Cantina house rules.

There was music, which funneled throughout every crevasse of….

The Mos Eisley Band in Action > ( 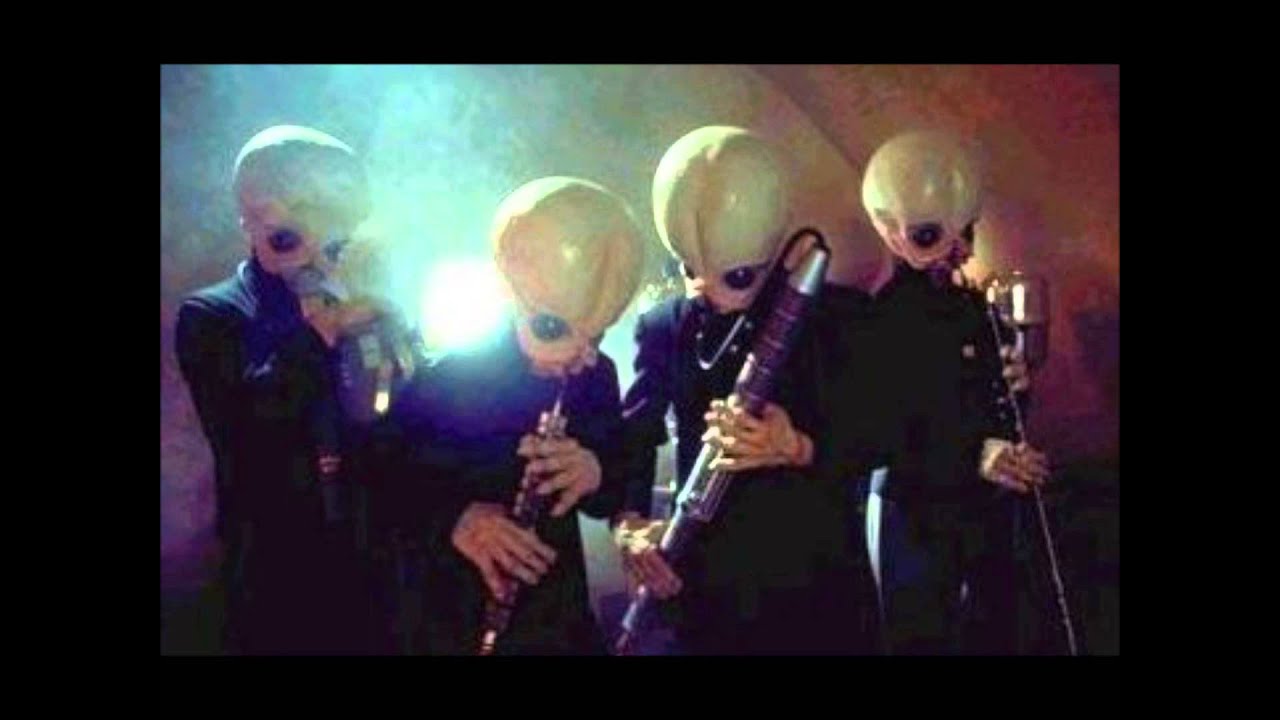 Patrons were gathered from near and far, across every planetary spectrum…. Jim Kirk would be found somewhere within this Cantina, (after having made some crucial preparations with Jyn Erso and Kyle Katarn): for the Upcoming Mission to take down Planet Coruscant.  Of course, take down was now being scaled down to fit his allies needs: who weren’t looking for Armageddon against The Empire. Jyn Erso was up for anything that might be required of her? While Kyle Katarn continued to have his reservations about his involvement in the entire project.

All of which left Jim Kirk to decide that he needs a break from The Empire: who have Hounds on Him from one galaxy to the next, right? Bounty Hunters here, Bounty Hunters over there….

However: Kirk had long since activated FORCE BLANK, otherwise known as, A Void in The Force. (

Good preventative to keep from possibly getting caught, right? Or so he hoped?

Last time he went to a bar on planet Nar Shaddaa.

Where he almost ended up back in The Empire’s Custody. Close Call….

Jim Kirk took a long look at some of the other faces in this joint.

For a long minute and a half, Kirk stared off to his right: believing in that instant that Captain Pike/Inquisitor Verrutum was there sitting next to him. At this very bar….

Cleanse Mind, unfolded soon after that vision. If only to be followed by another one.

A Beautiful woman, smiling back at Him…just minding his own damn business… During this time, others moved to sit down within the empty seats next to Kirk… 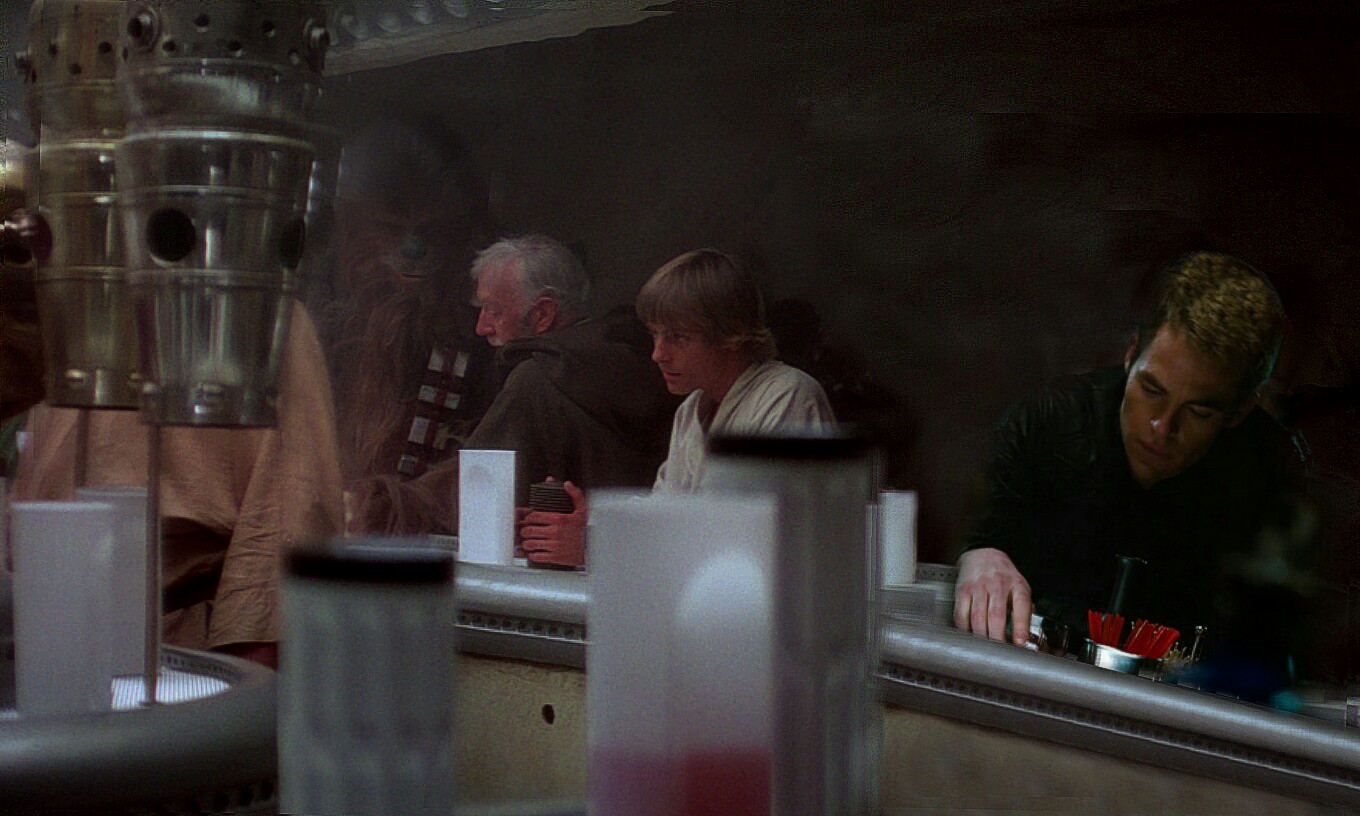 And it was here…

That something along the lines of a conversation started between The Pair.

Kirk mentions to no one at all, “Whiskers Whiskey” towards the bartender.

However, someone else answers in return, “Whiskey isn’t the best for the body”

Kirk turned to his right, and said, “…You’ve never had Whiskers Whiskey?”

Luke shrugged his shoulders, yet didn’t bother to look at Kirk in return, “…No. I don’t drink”

Kirk dropped the conversation, then and there, to cool his thoughts.

Until Luke muttered only loud enough for Kirk to hear, “Weren’t you on that Death Star?”

Death Star, does everyone and their brother know about his damn stint on that YARN BALL? Kirk narrowed his eyes over to the man in beige clothes, “Who are you anyway?”

Luke replies, “No one of consequence. But we’ve heard about your exploits” He pauses, “You’re from planet Hellifyno. You’re Kirk” He says, “…And you followed us here, didn’t you?”

Kirk’s eyes are still narrowed towards the guy who seems to know so damn much about him. “…Who am I speaking to?”

“Just a Friend. You actually helped us out back there. But remember this, Kirk” Luke warns, “…You’ve got allies. You’ve got enemies. So do we” Luke says, “…Don’t go through with your plan. Modify It. Take his advice. Take Kyle’s Advice” 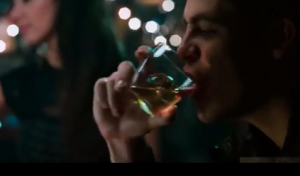 Kirk was still thinking about his time spent upon The Death Star / The YARN BALL.  Emperor Sheev Palpatine was there: and one could presume that Darth Vader was as well. Two Damn Peas in a Dark and Sickened Pod.

Palpatine had given Kirk a Light-Saber…

Daring Kirk to extract revenge upon him where he sat upon his Throne.

Surrounded Kirk was, while a mass of Death Troopers lined the walls within the Throne Room. Pacing. Kirk had Paced. Yet Kirk was a Novice Force User at the Time….Still: they had ideas for him: messages to bring back to the Federation. 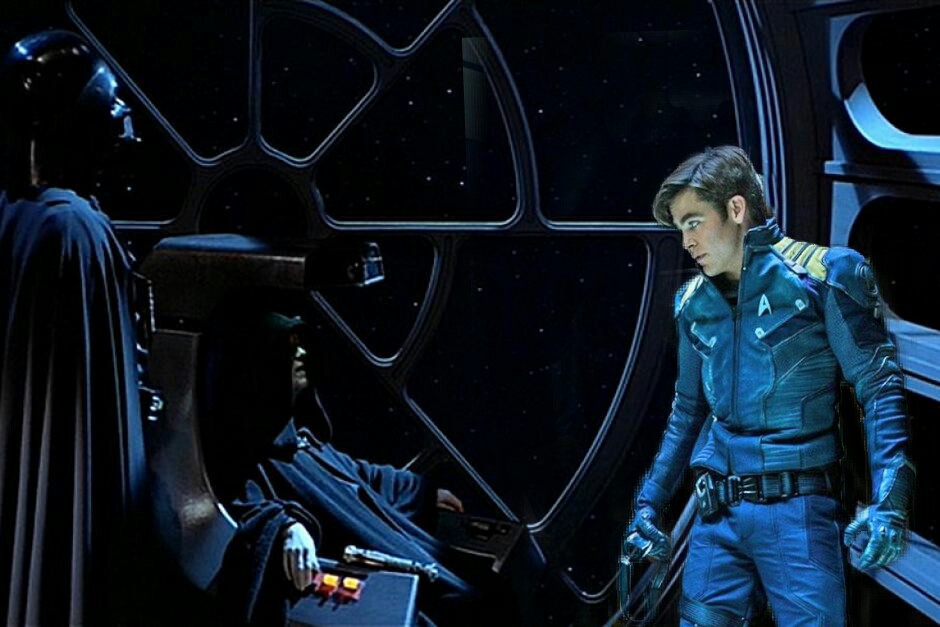 And Kirk is basically back to the beginning, right? Take Kyle’s Katarn’s Advice. Don’t Start Armageddon. They want a WAR. Kirk, you’ve got ten wars just for Hellifyno. “And if I take your advice, what can you do for me? Since you’re keeping tabs on me?”

Luke grinned in return, “…What can’t we do? WE’VE Got To Work Together”….

Kirk took another look at the source, and wondered if it was true? “I’d feel better if I knew a name? First? Last? Second?”

Kirk thought about his recent words to Danvers – “The Plan is this” Kirk NO. “…I’m going to take down planet Coruscant” KIRK NO. “…Financial. Historical. Intelligence. Orbital Satellites, Freighters and their Defense Transports” Wow. Someone reign him IN….”It’s NOT just about their financials” Kirk warns her, “I want to get those prisoners out as well. There are countless Jedi’s who are languishing in those prisons and no one is coming to their aid!” He raises his voice, “…I can’t sit back and watch this anymore: BECAUSE I KNOW WHAT THEY’RE GOING THROUGH” He admits, “FORCE ALCHEMY” He pointed to his right temple, “They’re minds are being poisoned, JUST LIKE MINE WAS, when we were facing off against that Green Eyed God” He says, “I want to even the playing field”

To which the patron finally replied, “Luke”

It was a first name to a very legendary person within the scheme of this galaxy. Luke. Thee Luke? Kirk’s eyes widened in something called: Respect. Nods, “…Then I’ll take that under consideration. When will I meet you and your band again?”

Luke replies, “…You’ll need more training First. And: He’ll find you, that he will”….That He Will. Who was Luke speaking of, none other than: Yoda…. 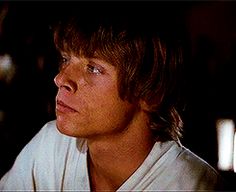