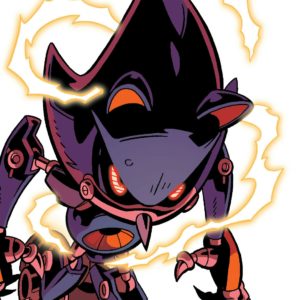 While deadly using only the technologies installed within his frame, Metal Sonic is not restricted only to the use of those tools to fight. Before the damage that had been done to his life data scanner during the Chaos Energy fueled teleportation that had brought the hedgehog robot to Hellifyno, Metal Sonic had used the device to copy and archive several abilities from the heroes of Mobius, including the initial life data that had been scanned to copy all of Sonic the Hedgehog’s abilities.

Super Speed – Before all else, Metal Sonic was designed to outperform Sonic the Hedgehog in every way. Without using any other means of propulsion, Metal Sonic is capable of running at speeds in excess of three thousand miles per hour indefinitely.

Super Strength – Due to the life data copied from Knuckles the Echidna, Metal is capable of feats of strength in the range of 500 metric tons. This is not exclusive to lifting or throwing power either, as punches made by the robot hedgehog can cause earthquakes, fissures, and even small volcanic eruptions at times.

Spin Attack – The signature technique of Sonic the Hedgehog, this allows the user to surround themselves with a small aura of Chaos Energy while curling into a ball to strike enemies at high speeds. Metal Sonic’s own version of the technique has retractable blades to increase cutting power.

Spin Dash – A variation on the Spin Attack, the user curls into a ball and surrounds themselves with a Chaos Energy aura just as before. The alteration comes in the use of the Chaos Energy aura to spin rapidly in place, building up maximum velocity almost instantly. The Spin Dash can also be charged, resulting in larger boosts in speed.

Homing Attack – A midair version of the spin attack that allows the user to home in on targeted enemies through the manipulation of the Chaos Energy aura surrounding the user. The technique is not limited to single uses, having the ability to be chained multiple times as necessary as long as the enemies are within range.

Sonic Wind – Through his copy of Sonic the Hedgehog’s life data, Metal Sonic is capable of controlling the same Chaos Energy created winds that the blue blur has been shown to manipulate at times. These winds can be used as a field around himself to move faster and harm anything that gets too close with cutting air, send out cutting wind projectiles such as wind blades, or even create small tornadoes.

Chaos Control – One of the first techniques Metal Sonic archived through his scans of Shadow the Hedgehog, Chaos Control allows the user to manipulate Chaos Energy to temporarily freeze or distort time and space. Most commonly, this ability is used for instant teleportations or slowing or stopping time for a short duration in battle.

Chaos Spear – A technique which allows the user to project a sharpened spear projectile of raw Chaos Energy in the form of electricity at an opponent. The electrified Chaos Energy can be projected through physical mediums, such as melee weapons, and once manifested they are substantial enough to be grabbed or get embedded in physical surfaces.

Chaos Blast – An explosion of highly powerful negative Chaos Energy that can severely damage anyone caught in its range with kinetic force and disruptive burns. The range and damage of the blast can be increased further through the use of a Chaos Emerald, and its destructive output can reach truly devastating levels if all seven Chaos Emeralds are gathered.

Psychokinesis – Copied from Silver the Hedgehog’s life data, this ability allows Metal Sonic to manipulate the environment around him with reproduced telekinetic energy. He can grab and move several objects many times his own size and weight as both a single or collective mass and can even use the ability on himself to fly at speeds equaling Sonic’s land speed should he find it necessary. The telekinetic force that can be applied through this ability can bend and crush metal, immobilize enemies movements, or even grab and hold non-solid objects such as fireballs and certain types of energy projectiles and blasts. Through utilizing pure telekinetic energy, Metal can shape the energy into energy based attacks, such as psychic blades and pulses, or even blasts that can temporarily paralyze enemies with disorientation.