Home Preparing for the Meeting

Preparing for the Meeting 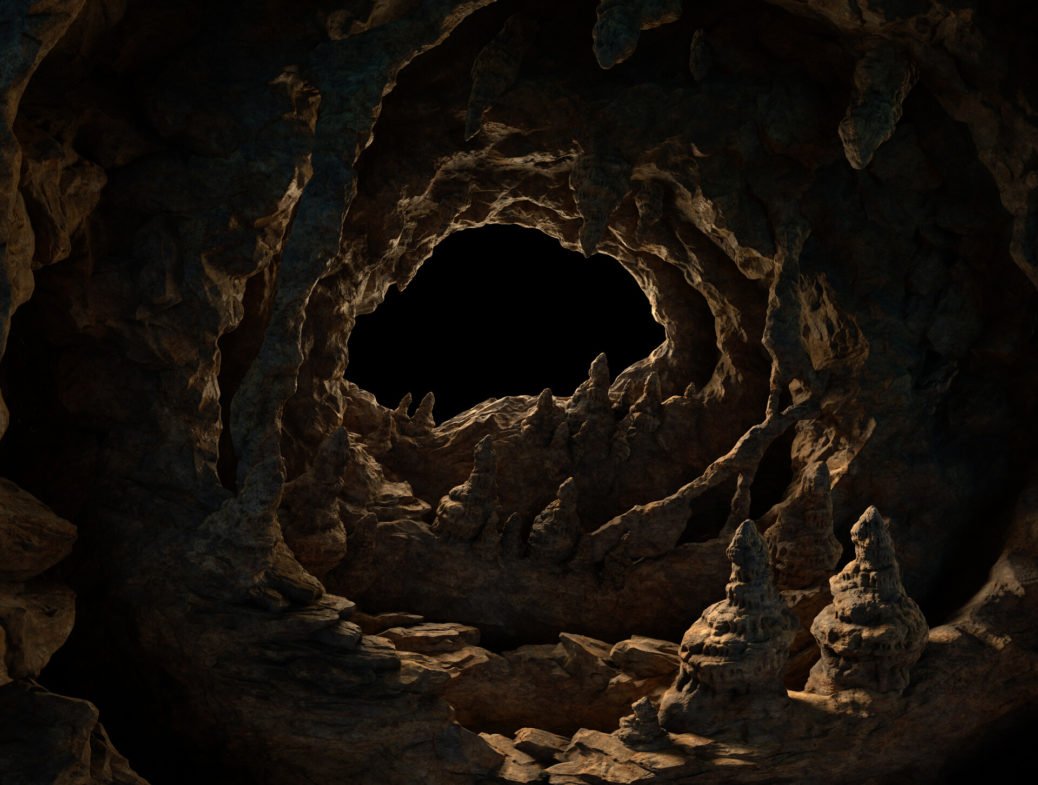 Eva was surprised to feel the sending stone she carried vibrate. She was even more surprised to hear Flayuer’s voice breathe into her mind when she touched it. One silver eyebrow rose and Eva slipped from her bed. Tucking Michael in a little better, she kissed his cheek and sought out her clothing. It was still dark, still far too early to be going to some strange meeting. However, she figured Angels slept less than she did and she was chuckling to herself as she summoned forth her Tainted Hellfire to sweep her away to the designated spot.

She appeared on the cliff overlooking the crashing waves of the ocean hundreds of feet below. Eva shuddered. She did not like water and that was a little too close for her tastes. Straightening her shoulder, she stepped forward into the mouth of the cave. While darkness would not have bothered her, this cave was well lit and before her sat six Angels of various ages and attire. Arien, Aure, Flayuer, Sirena, Syluna and Sil. 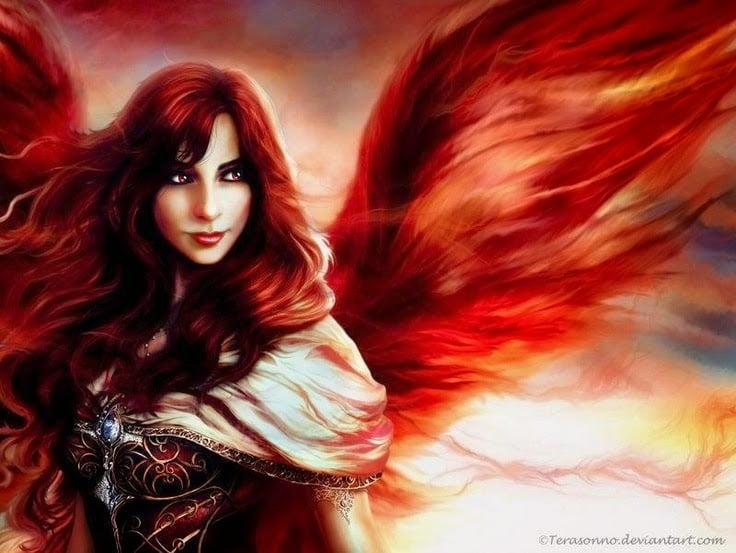 Arien was the newest of the team, trained by Flayuer and she carried a bow across her back with an endless quiver at her side. She had bright flaming hair and green eyes. Arien was generally used for recon and was a quiet soul. A small nod of greeting was given to Eva as she entered. 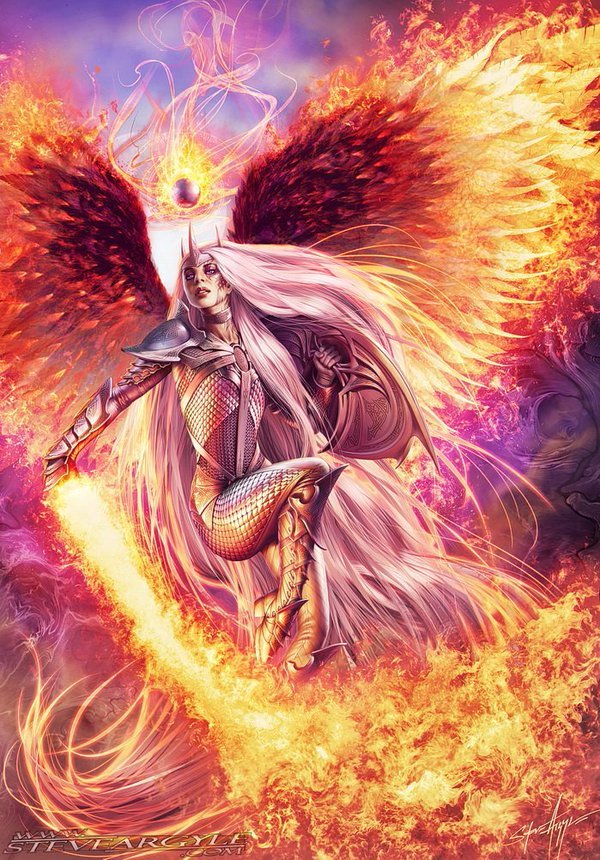 Aure was far more noticeable that Arien and perhaps even the others. She was tall, almost as tall as Eva at six foot two with bubble gum pink hair and pale pink eyes. Her wings are pink as well until she uses her healing ability then they become fire. She gave a very enthusiastic wave from her seat in the back of the cave. Eva chuckled and waved back. One could not help but be happy around Aure. 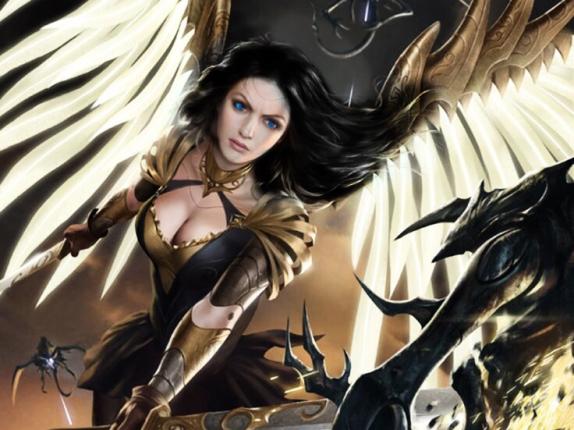 Flayuer gave her a jaunty salute from where she was leaning against the wall. This Angel had black hair and icy cold blue eyes. They were often mistaken for chips of ice, as fake but they were her true eye colour. She also carried more weapons than all the others combined and only half she wore openly. Clad in crimson armour, the flayed hide of a Daemon, she was an imposing figure. 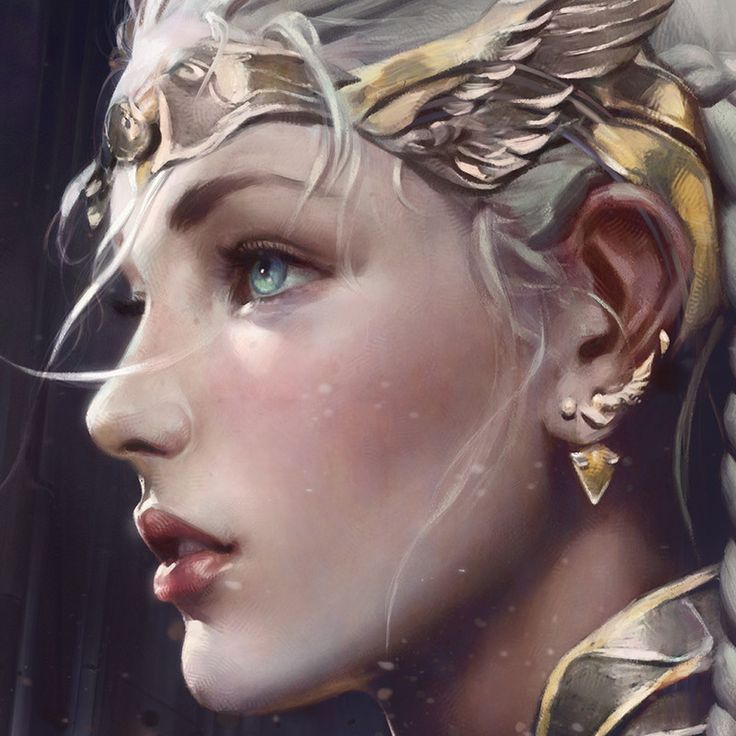 Sirena gave Eva a small nod of greeting with a hint of a smile. The woman was the second oldest in the room, she was a few years younger than Sil, but sometimes she seemed the youngest. Her personality ran the gamut of traits and today she seemed rather calm. Which worked for Eva. Sirena was shorter than most of them at a mere five foot nine. She had light grey eyes, silver hair. She wore a silver circlet atop her head and her ears were pierced many times over. Rumours abound that there was magic and power wrapped up in her jewelry. 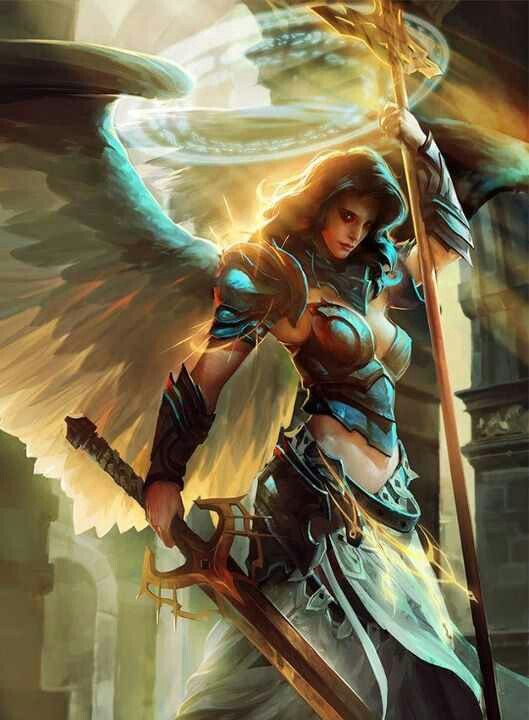 Syluna was the youngest (Arien is older than she but a newer Maiden) and is very young in mindset. While she has grown to be a noble warrior, she often thinks as a very young woman. As they are forbidden to have relations with anyone, she has never so much as had a boyfriend let alone a lover. However, she has a massive crush on a certain, mischievous God known as Hermes. She gave Eva a bright smile and a wave. 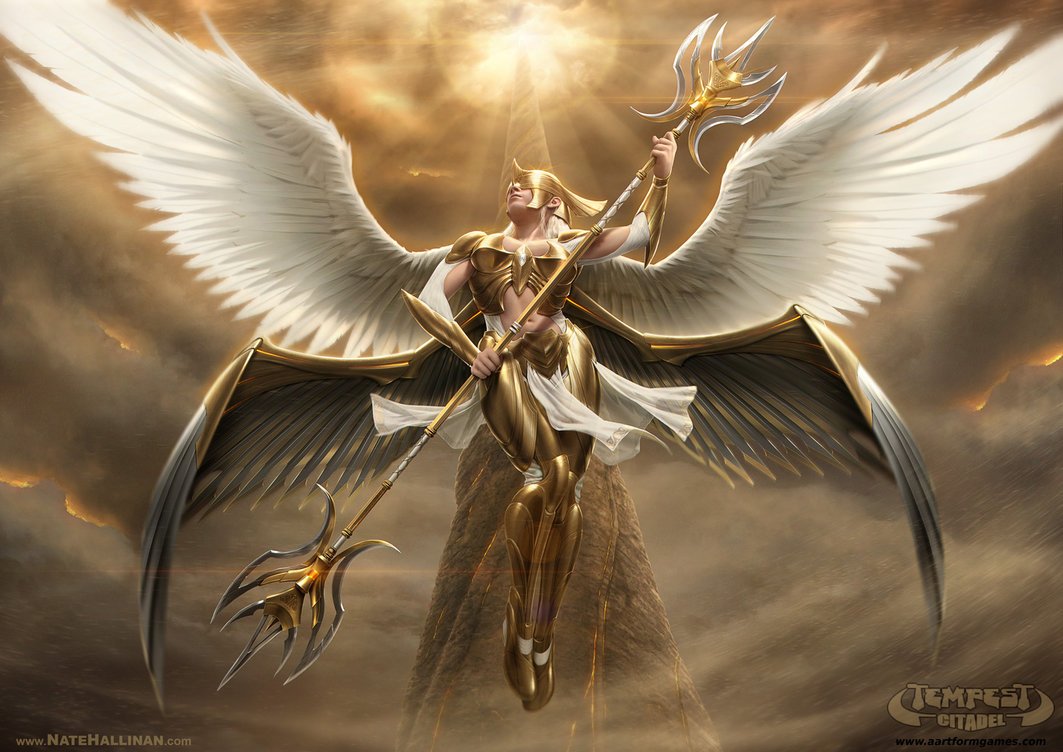 Sil was the last Angel before her and was perhaps the most unusual of them all. Standing at six feet tall, the woman had one blue and one green eye however she wears a gold helm that covers her eyes as she is blind and does not need them to see. She has two massive white wings and two gold lower wings. No one knows why except that Sil is different. Eva blinked in surprise when she saw her. The Seer was rarely seen outside of battle or at her hearth. To have her here, before the coming meeting, could be a very good or very horrible thing.

Eva bowed to Sil and the woman waved her to seat herself. Once she had, next to Aure, Sil spoke. Or rather, her voice breathed into their minds, a velvet caress filled with unspeakable power. There was a reason most feared Sil.

“The meeting will not go as I had hoped. They have denied you all of your allies, even your family. However, they could not deny you a friend. They do not believe you would chose a lover for his power and thus dismiss him as nothing more than emotional support.”

There were snorts and scoffs from the others though Flayuer laughed out loud. “Eva has never taken a weak lover. They all have had strengths that could outdo most Angels. They are stupid.” She said.

“Be that as it may, Flayuer,” Sil said, her mental voice rather dry. “I would rather they not know the truth until it is too late. However, Eva, I called this to tell you one thing and to warn you of another. First,” Her voice became softer, warm. “Know that the Maidens stand behind you as does your Mother and some of her allies. We all know what Michael had done to you, the crimes he had committed against you. He earned his demise and you had fought the need to end him for centuries.”

Eva felt a little stunned by those words. They knew, they understood. She was not alone. The eyes of all were upon the silver haired girl and she swallowed the urge to make some joke, something to cut the emotion in the room. Like her father, Eva never coped well with emotions outside of anger. That one she did very well. So, she nodded her head once, feeling the sting of tears in her eyes. Aure slipped an arm around her waist and laid her head on her shoulder.

She heard the girl sniff slightly and then whispered in her ear. “Why do you smell like cats?” Eva blushed and grinned at her as Sil continued.

“We will do all we can to protect you but I must insist, if they choose to kill you, take your friend and flee. They can not bind you in the meeting, none of them can hold you against your will and if you do not run, you will be forced to kill some of them. You do not want their blood on your hands so now the warning.” Sil’s voice grew colder, heavier in their minds and even Flayuer winced slightly at the pain.

“You can not harm any while you are in the meeting. If you raise a weapon, you will start a war that will not end until either your Mother is executed or you are dead.”

There was a gasp from most present. “You have seen this?” Eva asked and the Angel nodded.

“There is no way. I have seen many of the possible results and all end in either your demise or Uriel’s. I know you do not want either course. You can not raise a weapon and Eva, dear one, they will do everything in their power to make you do so. But you must resist. Tell the truth of what happened, give the history of your interactions with him, his crimes, and be honest. Leave nothing out.”

“Which way will they vote if she does that?” Syluna asked quietly.

“I do not know. There is something else in play that alters the course.” Sil admitted and Eva frowned. “It changes.” The girl could feel the Seer’s blind eyes upon her, even through that golden helm. “All I can tell you for certain is, the truth will give us all the best chance. To lie will damn you and most of us.”

The woman held up a hand for silence as nearly everyone started throwing questions at her. She was obeyed in an instant. “I can not share most of it with you, you know this. It will only serve to make choices more difficult. Eva, just tell the truth. The whole truth.” She paused a moment and Eva was sure she saw the hint of a smile curve the woman’s lips. “And show them the truth, if you must. Accentuate your point.”

It took her a second to follow the woman’s reasoning but when she got there, Eva was not sure she wanted to do that. With her control of Twilight, she could craft truths in peoples minds. It was not easy, it took a lot of power to form and maintain but it had worked on Michael. She had led him to believe that she had destroyed his city and all his people. It had pushed him to actually aim to kill her but her blow had been better than his.

Eva let out the breath she had been holding and nodded. “I can do that.” Sil nodded her approval.

“Good. Now, we must go before we are all missed. Take care Nephalem. One day it will not be so bad. I promise you that much.” Sil whispered the last only for Eva before vanishing in a burst of gold light.

The others rose and hugged Eva. Arien held her a little too tightly and the girl laughed, squeezing her back. They all left until it was only Eva and Flayuer. The warrior looked at Eva and grinned.

“Your mother is proud of you, of your strength. She wanted to see you but we warned her against it. But she is safe and none of us are going to allow harm to come to her. Worry about you.” Flay then did something she never did. She hugged Eva.

The girl, stunned, hugged her back. She felt the tension in Flay, knew she was uncomfortable with the action but the fact that she did it anyway spoke volumes to Eva. “Thank you.” She whispered.

There was a wink from Flayuer, a flash of light and Eva stood alone in that now cold, dark cave. With a grin, Eva teleported back to her home, stripped once more and crawled back into the bed next to Michael.