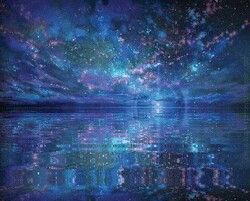 Loading...
<BLINKS, appearing on the balcony of the imperial palace, below in the main courtyard, all of Hyandria was gathered. they were whispering amongst themselves. wondering what was going on? it was a solomn gathering. with fear and anxiety in the air. Along the back of the balcony was the council. looking anxious>>”Empress. are you sure about this?” <<She just gives them a look than steps forward toward the edge of the Balcony so she can look over her people. she takes a moment to just watch them.<
<<She lifts one hand and everyone goes quiet. she speaks firmly. strongly and clearly.>> My Friends! we all know the borders of our realm have been breached. the golden plague from Hellifyno has cracked our realm, and began to infect our realm. We cannot stop it. There is no cure at this time. And there is no help to be sought. <<with this murmurs go through the crowds. worry and fear. She takes a breath and continues>> However I will not allow us, as a people, to be lost! The solution for us is not simple. It there will be consequences for some of us, but at least will we live on; we will survive and continue on! <more whispers through the crowd. looks around and between the people as they focus once more on their Empress>> You all were called here because I will be breaking our realm in half. cutting our home in half. Cutting away the infected parts so as to save our people. This will create restrictions for us. And we will be weakened for a long time while we heal from this break. But …we WILL SURVIVE! As long as we Survive! We can Heal and Grow Again!
<<With this there are murmurs and words of understanding and acceptance. She lifts her hands again for silence and continues>> I’m going to ask all of you to go to your new rooms now. to settle and quiet your minds and your hearts. While i breach the realm and make this break to cut us off i’ll need complete focus and as much peace within the heart of the realm as possible. I ask each of you to help with this by not allowing fear or despair enter your hearts or minds. But keep hope strong and know i, Anasandrya of Hyandria, will not let you fall. That as long as i breath, you will be safe! << there is a breath than a cheer of praise and hope before everyone begins to scatter, moving quickly into place. She turns to face the council as they approach>> that means you all too. “Empress. be truthful. what is the risk to you?”
<<for turns and looks up at the moons before she answers>> as best. i’m weakened physically for a long time. I could lose my memory…i could lose my sanity..i could lose years of my life.. I could die. There’s no way of knowing what will happen. only that it will work and this is the only way to prevent the golden plague from harming our people or the heart of our realm.<she takes a breath than looks at them> the outer half will be exposed..open to the Verse beyond. but our inner realm..this part, will be sealed off completely, as it always has been.
<<She nods to them> go now..inside. keep calm. no one can help with this…<the members of the council bow than move inside. After everyone is safely inside. she closes her eyes and focuses. she looks deep within herself to find the bond between herself and the realm. As Empress. she was the only being so fully connected to Hyandria. what happens to the realm happens to her.She finds that bond and feels herself rise up. her body lifting into the sweet smelling air of her beautiful home high into the sky toward the stars. Her body shifts and deforms, losing skin and texture, becoming small, small particles that hold to a form. High up she goes passed the stars to the outer boundary of the realm where she melds and merges with the realm. She feels the plague in parts of the boundary line, feels the twisted sickness that is infect the realm than moves ahead of that infection. She focuses: her entire being becomes completely part of the realm and the purpose. She carefully but with absolute determination begins to rip the realm apart. With careful precision, she creates a perfect breach between the outer realm and the inner. the outer realm will now be open to the Verse. Unprotected and exposed to any who may care to venture there. The inner realm, where her people would no be safe, would be hidden. still closed off and impassable. It was done! The people of Hyandria were safe; the realm, however, was ripped in half. >
<<As this completely new boundary was settled, she began to reform. her body lowering from the stars, perfectly whole again laying on the balcony where she started. Her body was whole. but she was not. One of the council came out, kneeling next to her. “Empress? Empress are you alright?” she blinked her eyes. they were brightly gold with rings of light blue. She blinks at him> i’m alright. i’m alright. <she carefully sits up, the councilman helping her. she takes a moment, just sitting there. The councilman puts a hand on her shoulder to steady her< “Empress, are you sure? Do i need to send for someone? XenTwo perhaps? ..i’m sure the guardian…”<<his words fade at her look of utter confusion.> who?….
In the end,  the price paid was memories. She had lost all memory of anyone who she cared deeply about…anyone she loved or even hated. The memories are lost forever, For as she tore her realm apart, so too did she tear part of herself apart. and just as her realm can never be returned to the way it was, nor can her mind.
0 Comments