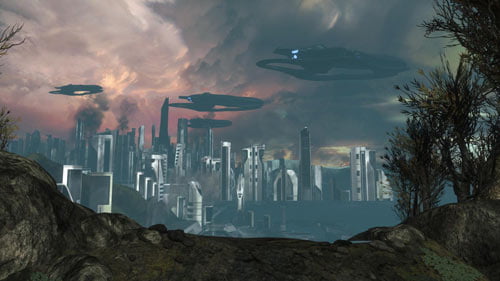 Loading...
Year: 2552. Planet: Reach. Location: New Alexandria
Rmae Tukall’s drop pod door burst off. The Elite Ultra jumped out into the firefight, the rest of his strike team landing shortly. They grabbed their plasma repeater in their right hand and began firing at the Human soldiers defending an evacuation route they needed to follow to reach an Anti air emplacement.
He gunned down two soldiers standing by a doorway, than activating an energy sword in his left hand and cutting down a male civilian as they ran past. His energy shields released a discharge as they broke. He jumped behind cover, a sniper on a balcony firing down on their position. “That sniper is going to make this interesting unless we can get some support down here!” He said into his comms. “Until you get one of those anti air cannons down, we can’t help you. Banshee squadrons are busy at the moment.” The shipmaster of the Swiftful Vindication replies.
“We’re on our own until we neutralize one of the targets. Let’s keep our heads down and push forward!” Him and the other Ultras start moving forward, using crates, pillars and anything else for cover, stoping and going all while under fire by enemy soldiers that guarded the entrance to the elevator to the roof top, where the first cannon waited.
A bullet whizzed past his head, killing the Elite beside him. A grenade flew by, hitting the wall and exploding. An enemy air craft with grenade launcher turrets had taken note of the fight, and had started firing into the narrow walkway Rmae and the rest of his squad. “Gun it!” He yelled, running forward, his shields getting pummeled with bullets. Another two of his squad mates get caught in the explosions, shards of their armor getting flung all over. His shields broke again as he reached a spot where the ship couldn’t hit him, three other Ultras and an Elite making it there as well. Rmae felt a horrible pain as a bullet went through his left arm and shoulder, crying out in pain. The others get in front of him, to let his shields recharge.
Even as they reached full capacity, his arm continued to drip with dark purple blood. The rest of his squad secured the elevator, the Elite walking over and helping R’mae back up. “Come, brother. The enemy cannon lies ahead.”
He helped them over to the Elevator. “Once we take it down, we’ll get you back to the ship.”
The remaining squad members piled into the elevator, selecting the top floor. They started tending to R’mae’s wounds as it went up. The building shook, the power going out.
“Not good.” The elite says.
5 Comments