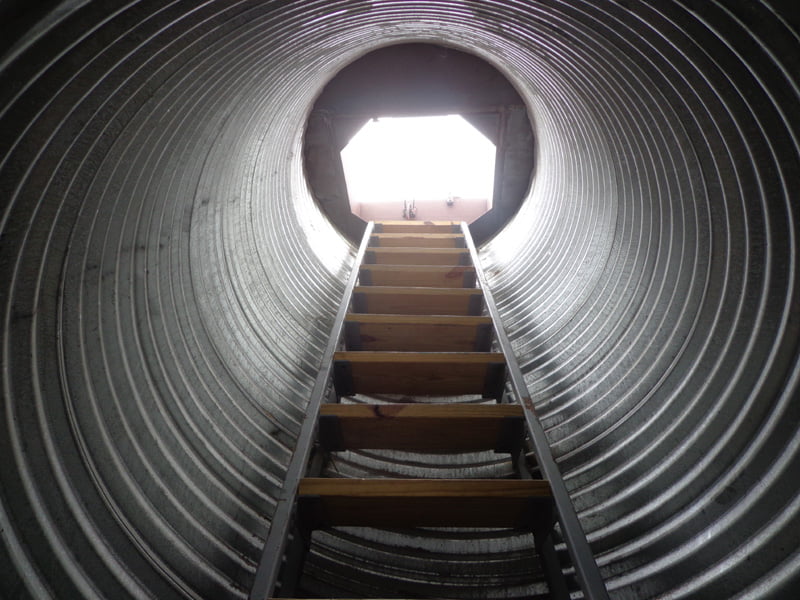 Every day these woods outside of Persistence became a little easier to navigate. The smell of it, of the trees, it used to clog the mind, obscure everything that one was thinking about. At least, it was always like that for Rowan. He never really liked the outdoors, which was a curious thing, given how much time he spent there.

Currently, he is moving backward through these woods, trying to ignore the smell and focus on the task at hand. It was, yet again, peculiar that the woods’ aroma bothered him in the first place, given that he was dragging a dead body along behind him. A man, maybe late 30s, and very dead. His shirt is covered in old blood, crusty and stiff at this point. Whoever this was, he hasn’t been a decent conversationalist in some time.

Coming upon a hillside among the deepest reaches of these trees, Rowan abruptly drops the body. “Wait here.” Coming around the side of the hill, his boots crunching against dead leaves, he brushes dirt and sticks away from a spot he has perfectly memorized, even without use of a marker. There’s a hatch beneath the forest’s floor, which he forces open with a small series of sharp tugs. There is what looks like a large metal sewer pipe section heading into the earth, with a makeshift wooden staircase heading into the black below.

Returning to the body, let’s call him Doug, Rowan again hooks him under the arms, dragging him into the hatch and down some steps before closing the hatch behind him. He is now inside a small dark space, which was actually a buried shipping container. This place, whatever it was, definitely didn’t smell like trees.

Reaching into his pocket, the young man flicks on a lighter, holding it away from his flammable bearded face, illuminating the container. Several bodies were strewn about on the floor, enough that the actual floor was no longer visible through their collective mass. Some were bloodied, some were clean, but all of them were dead, so who was gonna care. “Good news guys. We’re gonna do a burn today.” Dropping Doug off on top of the heap, Rowan turns to a nearby gas container, half full of fuel still from last time. He opens it and begins splashing the liquid over the corpses.

At that moment, an echoing boom sounds in the chamber, and he raises the container up to stop its noisy spill. He doesn’t make a sound, holding his breath to listen in case it happened again. Then… the entire ground gives an almighty tremble, so sudden and violent that Rowan is knocked off his feet. The lighter flies out of his hand, and things go dark long before he smacks his head on the wooden steps, losing consciousness instantly.

Hours pass, probably a day at least, before the psycho killer wakes again. Blinking a blur out of his vision, he takes note of the fact that he can see the inside of the container, meaning daylight was creeping in through the edges of the hatch. Rolling over, he comes face to face with a dark, dry blood stain of his own make, but it isn’t much. He reaches up, touching the crusty spot of his bald scalp. He would need to stitch that when he got back. Ditching the idea for a burn right now, he crawled back up the steps, unlocking the hatch and pushing it open.

Despite not burning these bodies, he definitely smelled fire when he poked his head out into open air again. The trees, the ones still standing, were on fire. Hell, everything was burnt, burning, or close to it. And milling through what was left of the woods, he couldn’t describe. They looked human, at least from a distance, but… not. They were deformed, mutated. Upon closer inspection once his eyes adjusted, he realized some of them had rotting flesh. They were dead people! Hearing a moaning snarl from just around the hill, Rowan quickly closed the hatch again, locking it tight. “That was no earthquake…”

He moves back down to the bottom of the steps, sitting with a sigh. He looks at the bodies, now surrounding him in a small hole that he couldn’t safely burn. Surrounded by reminders of what he was. Was this some kind of penance. Was he being punished. The look on Doug’s face said yes… well, not really, he just kind of stared at Rowan with his mouth hanging open. “Get comfortable, guys.” He grimaces, bending over to pick up his lighter and pocket it again.

“We’re gonna be here for a long… long time.”