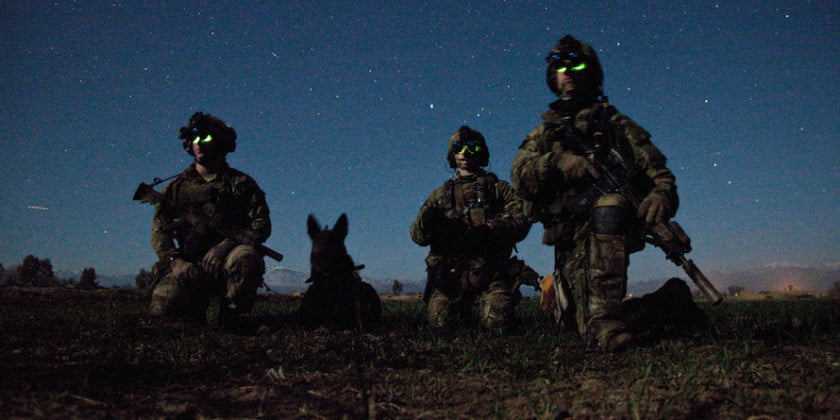 – The big man, LittleSun raised his head. The night vision monacular sitting over his right eye, attached to the MICH helmet, making him look like some kinda sci fi cyborg.  Sending a hand signal behind him, he gave the command to Arch Angel. Checking his watch, he groaned, inwardly.  They only had 30 mikes before sunrise…-

– Hawkins low  crawled another 20 meters before he stopped. Unsheathing the combat SRK, he waited til the sentry turned his back to him before he rose from the ground. With a firm grip, a yank  backwards and a quick swipe of his right hand, the blade crossed the mans throat, as he gurgled his last breathe, the blood spattering the leaves he stood upon. Getting rid of the body, he whispered into the throat mic. -“ Tango down, engage hostiles as they appear..Going  inside to secure target of interest. Out” – and like that, he vanished within the building, using the expired sentries access badge and his severed hand, in the scanner. Once inside, he jogged down the hallways and found the server room. Attempting to access the room, he found the man must’ve not had the correct entry access. Denied..Tossing the hand aside and looking at the badge, he looked down the other hallway,intent on finding another way in. Grinding his teeth, he pulled the sidearm, and twisted the suppressor onto the barrel end. Shooting the deadbolt , then the access scan pad, he shot the handle as well, as the door popped open. Rolling his eyes, he hated this furturistic shit anymore. Pushing the door open, he was met with a shot gun blast to the chest plate. He could feel the pellets embed themselves in his lower jaw as they splashed off the armor. Squeezing the trigger continuously, he rolled over on his side, listening. Ejecting the one magazine, he fished another out, and slammed it home. A scuffling of boots on tile, as he rolled away from the spot, not a second too soon, and another blast tore up the floor. Coughing as he stood up, he seen the dark uniformed figure duck as he pulled the sidearm up to get a bead on the guy. Ducking himself, he sprawled out on the floor, and leaned out into the hallway. Spraying the end of the lean hallway, he heard a muffled grunt. Frowning, he pulled himself to his feet and began tracking the source of the ragged breathing. Turning the corner, he leveled the weapon out in front of him. The figure was laying down, curled up in a fetal position. The shotgun lay above the head of the figure. Right as he began squeezing the trigger, the figure coughed and spit out some blood. Grabbing the flash drive from his pocket, he inserted it where he needed to, tapped in the access code, and began downloading the software and plans.  The figure had reached up and began trying to pull the baclava from its head. A quick flash of blonde hair, and the figure stopped moving. Standing over the figure as the download ended, he placed two shots in the torso and one in the head, taking out the blue eye looking back at him. Stumbling out, he couldn’t breathe, as much, as he inhaled and felt a burning sensation across his chest and stomach. Hitting the mic as he neared the door, he frowned – “ alphas… begin your exfil.. Bug out!..”.. hitting the door, he stumbled to a knee, as LittleSun came from around the building and grabbed him roughly by the arm and jerked upwards. – “ Lets go Hawkins!!” – The big man roared as he half drug, half carried the man off back into the darkness. Minutes later, the rumble of a helo sounded overhead, as the building was left in quiet reverie.