Song of the Seasons 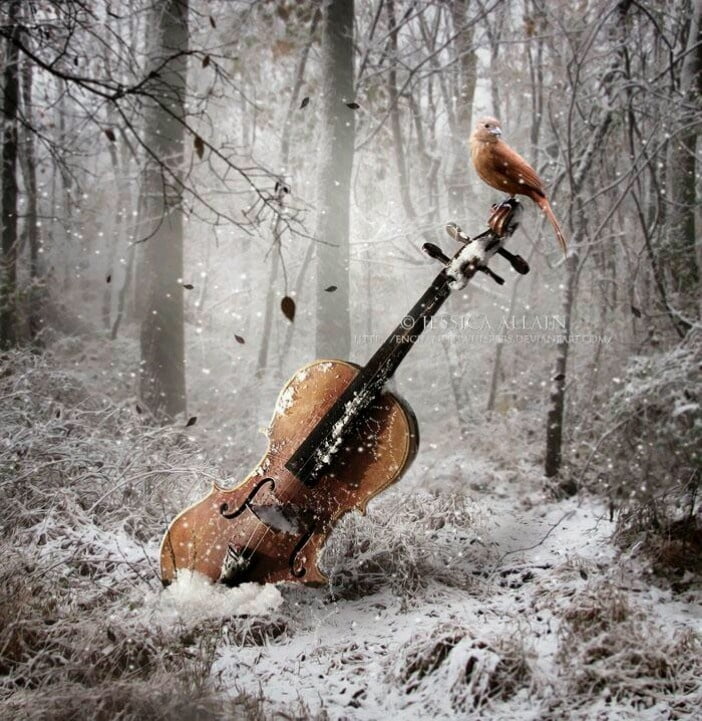 Even for a god, magic is easier when using a focus. Musical foci have always been Helvegen’s favourite, since the days of old listening to his master teach a young fox to play the flute. This is why he now holds a new violin, perched atop his spire. Cherry and Nibbles look up at him expectantly, eyes wide as they watch the young man prepare to perform. Closing his eyes, Helve smiles and begins to play, drawing the bow slowly across the strings. The first movement is gentle and distant, like the kiss of a ghostly maiden born of frost and forgotten dreams. In its wake, snow begins to drift earthwards, weaving a new white blanket for Magicia and her kingdom. He balances there, the architect of seasons, smith of dreams and walker of worlds, filled with passion and love, and switches the key to a distinctive minor.

The snow melts in the midst of its downward dance, becoming a gentle rain that hisses softly over the land. It patters on Helvegen’s unguarded shoulders and hair, sending droplets running along his hand, along the strings, but it is hardly enough to deter him; after all, he intended for it to be this way. The endless blue-grey sky, recognizing the song of an old friend it thought lost, hums with the promise of thunder. Helvegen’s melancholic, almost apologetic tune dissuades it from spitting lightning, and with an accepting rumble, he is forgiven for his absence. Opening his eyes, Helvegen lifts his head to catch raindrops on his pale face, not slowing in the least. Now comes the wind, sweeping away the rain clouds in a fierce gust spanning miles and miles. Helve’s smile becomes a grin as he begins the next movement, and the little dragons come out from beneath the shelter of the roof to watch him once more.

The queen sleeps, tucked safely away in her chambers. No maids dare try to rouse her. They know they’re expendable, but rousing their mistress from deep slumber isn’t just suicidal. It’s considered heresy. However, in her dreams, Magicia’s battle against her chaotic side is calmed by distant music. Even in sleep she is comforted by Helve’s sweet music. Comforted to hear him play once again.

The sun blazes down across the land, striking hard and hot. The puddles left by the rain are evaporated and returned to the heavens, and new life begins to sprout from the earth. Vines, bushes, long grasses and trees, both plant and crystal, twist out of the ground with rapturous vivacity, answering an arcane call so deeply entwined with the world that magic and nature are made indistinguishable in their unity. Helvegen’s song is as fierce as the sun, its notes igniting ingles in houses and splintering crystals. Birds hatch, animals emerge from their burrows to feel the light on their backs, and the young man’s eyes mirror the blue of the sky, full of joy and hope, for all that is and may be. The edges of his spider-silk cloak catch alight, blue-red flames licking all along its surface and moving to dance over his body, casting his face in shadow. He seems taller, broader, as he plays the song of summer. The song reaches its zenith, each note striking with the force of a smith’s hammer as Helvegen forges a new season, molding the world around him and priming it like a canvas for painting.

Normally the maids might feel a hint of annoyance at the random changes in weather, especially since Helve is the source. But because their hearts and minds are so intrinsically linked to Magicia, her good mood and peaceful rest reflects on them. Its even enough to keep the head maid’s minds off if their worries, if only a little.

All across Paracosm, the crystal woodlands and waters gleam with inner light, shining a warm, brassy orange. Smells of crops, plants and flowers that would not normally grow this far south whisk through the air, so fleeting as to be mistaken for the mere products of one’s imagination. Helvegen’s eyes glow orange now as he plays through this penultimate movement, the wind picking up and causing crystal shards to fly through the air like autumn leaves. They scatter all over the land in shimmering bursts, and as Helvegen plays a song for the land, the land sings back, whispering prophecies and pleasant dreams to all those willing to hear. The flames on his cloak are blown out, and his long hair is swept about in a nimbus of long raven tresses. He laughs, a sound like wind chimes echoing down a desolate road, and languidly draws his bow across the strings once more before commencing the final movement.

His song slows and grows quiet as the colours begin to fade. The clear blue of the sky gradually melts into more auroric hues, and when the orange light is gone from the crystals, snow begins to fall once more, familiar and comforting, weaving that blanket of pure white again to cover the land Helvegen calls home. A few more haunting notes rise from the violin as Helvegen finishes the song, and looks down at the instrument in his hands. A satisfied smile crosses his face; this will certainly do. Having finished playing, he floats down from the spire and kneels to rub his dragons’ tummies. Assuring them that he won’t be gone for long, he vanishes, materializing soundlessly at Magicia’s bedside to give the sleeping queen a light kiss on the forehead, and then flickers out of the palace. His bare feet touch the snow, but only just sink into it, leaving the barest hint of footprints across their yet-pristine surface. “Think I’ll go for a little walk now,” he says to himself, but the crystal forest takes the opportunity to rattle an answer. With an acquiescent nod, the young god heads into the woods, his cloak fluttering quietly behind him.