Home Sticks and stones may break bones, but floor chains excite me.

Sticks and stones may break bones, but floor chains excite me. 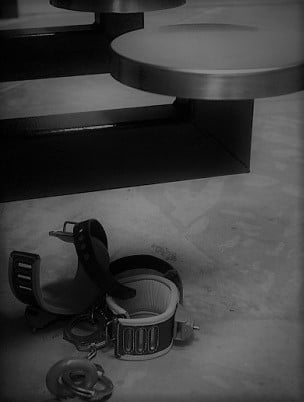 In an hour, a singular inch was the only movement Krieg had made while he sat there, watching the good old blonde doc stare right back at him. Silence, her tool of choice in the dueling of minds.

He breathed and let his eyes rove; however, he also warred, battling within himself to stem the flow of desire that roiled within. He didn’t like talking and attempted more than once to attempt any mediocre amount of conversation that might come across as something other than pure nonsense. An hour of working through how to mention a humblebrag. If, IF he could tell her, he’d mention how proud he was of himself for avoiding death and killing another in seven days.

Monday, Last week, 10 days ago, he’d taken out a lunchroom worker with a wooden spoon, digging a portion of his ear a skull out with the snapped off the end of its handle. Gleefully he’d shoved the angled edge down his canal, shrieking something to the tune of roadway cones, and those red flares, after hearing the man talk shit about him for the better part of four months. He’d given him plenty of warning, a few words of built-up intensity each day as he passed through his line…. but no….the pretentious fool continued on and on.

Look at her. With that, honeyed spun silk, shining like the damn sun. Hope in a dreary place like this. You’re a damned fool, Krieg. You’d ruin her for the everyday life. Ruin yourself as you watch those she works with defile her mind this place. If only we could walk from here…picture it…us sitting somewhere warm, in the sand, the water on our feet, and the woes of the world packed away and buried…..We could talk like decent human beings….of everything from Freud to whatever was on television….our hopes, our futures, our dreams, all without having to worry about any of this shit……

“Sycophantic doctor. Staring with those pretty eyes….can I pluck them? Wag a tongue and sing my score to you, so we can always stare at one another always?” He smiled, suddenly leaning over, his thick arms enveloping the scuff marred metal table. It was his biggest fantasy. To see the sun and the beach again. Hold a real conversation with a woman who wanted him for his smarts. An escape from reality that kept him from deteriorating further. But it was a daydream, and daydreams were…well that. Fucking processed imaginative delusion. Especially in this ratted hellhole.

Suddenly grinning, the chains that held his wrists clattered, metal to metal, as he let his hands envelop hers as she wrote, stopping her pen. Perhaps….just perhaps, stopping her enough to get her to really really listen. Twice a week, they met, him spewing his life story in broken, nonsense words and her writing it all down with a furrowed, forever confused brow. Until now, he’d never once touched a hair on her. Kept himself at bay out of respect for the woman who treated him like the human he used to be. He just….he just wanted to push a few buttons. Check and see if she’d flinch away.

Standing, leaning further, he shifted, attempting to grab a test of her hair, an inch further, to….. his hands snapped back as his shoulders drew in close. Those fucking piece of shit chains. He wanted to smell her, to taste the bitter kiss of perfume on flesh, to hold her, and see how small she was against his six-foot-nine frame. He couldn’t touch her, but he could stand close…Drawing his nose against the curve of her cheek, he growled, flexing the give of her neck, the hollow of her collar bone. “I’d like to keep them in the night, let the confines of its jar amplify their ocean blue, hear a pleading whisper from your lips while I dig fingers through softness. Watch the pant rise in your chest, forced down from my calluses….”

Could she understand that?

Could the doctor genuinely get the idea that she riles a normal man so? Krieg was stuck, trapped in that head of his filled to the brim with a remarkable education and overcomplicated thoughts. She showed no horror. Only a concentration of breathing, and she waited him out.

He was more than aware of how he was perceived,  but what he tried to convey in full sentences, really and truly, was that of a futile babbling, pushing out his meager attempt to communicate.

Grunting, he tugged, pulling himself against the unforgiving hunch as his chain refused to give leeway. Frustrations rose as he realized suddenly that he was now bolted to the floor, with no more space. Once upon a naive time, they would only to shackle him to his own feet.

He roared. Anger, frustrations, need, and desire. All spilled forth in his outburst.  He only wanted to touch….and be touched.

It shouldn’t have been as hard as it was.