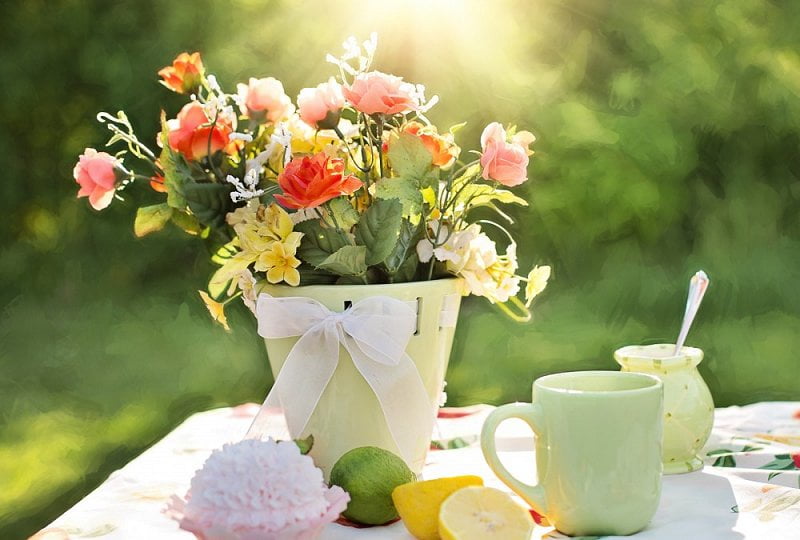 Written by Alexandria Nash and Echo the Healer

The next morning after breakfast, Echo set Alexa up in one of the herb gardens, giving her a cushioned rocking chair with a small table beside it and a cup of lemony, restorative tea.  Then the healer went down on her knees and began to dig with a trowel for medicinal roots.

There was unaccustomed silence in Alexa’s head.  She had tried to rest last night, but instead had gone through the discomfort of all her links breaking.  Now every link to anyone who was ever connected with her was broken.  She couldn’t even contact Aero at ALL Corp, her employer, and tell him she was still alive.  She sat sipping the fragrant tea quietly and then, after a long silence, said, “Echo, what’s going to happen now?”

The healer sat up, trimming gentian roots with clippers before putting them in a basket.  “Well – can you be sure that the 1% of your soul you paid for the contract with the mice has not been destroyed?”

Alexa took a deep breath and leaned back in her seat.  “Yes, I’m sure.  It’s still around somewhere.  I don’t know what the mice did to it, but from time I feel I’m in a place I don’t belong …  I feel caged …  but I’m not.  Does that make any sense?”

Echo frowned.  “Then it is not just the loss of a small part of your soul that is causing you to feel so terrible.  It might be Hellifyno’s limited magic, but…” She paused.  “It does not sound like it, though.  I do not know.  That you feel trapped is odd.”

She pulled on her gloves and bent down, digging again.  Alexa waited, expecting Echo to say more about her soul, but eventually the healer said, not looking up, “Until Weary Wanderer came to visit me the other night, I did not think there would be any at magic at all in Hellifyno.  I expected catastrophe, which is why I fled.  Now that I know there is some magic, I think it may be possible to heal and restore more of the true essence of Hellifyno.  If it can be done – and I am not at all sure – it will not be easy, nor will it be complete.”  She started to say something else, then shook her head and went on working.

Alexa nibbled on a finger as Echo talked, eyes narrowed in thought.  “I didn’t know about the – the shortage of magic.  And I can understand how that would be harming the magical plants.  I had already thought that there could be a something in the genome of those plants that allows them to process magic along with nutrients in the soil.  Maybe this proves it.”

Once again she tried to turn on the device she always wore on her wrist, then spoke irritably.  “I have a lot of my studies stored in this wristband, but it’s broken.”

“What?” the healer looked up.  “Oh.  Technology does not work on Worlds’ Crossing, except in a few select places.  I have hot and cold running water, but that is all.  No electricity, even.”

She went on, “I have no doubt that there is damage to magical plants and insects, even down to microbes in the soil.  I will not know how bad that damage is without going there.  What puzzles me is …  how in the Nine Hells did the mice restore any of the magic if the new planet was, as the one we saw said, prefabricated?  It makes no sense.  NO SENSE!”  She stabbed her clippers point down into the ground, then softly said, “Sorry.”  Pulling the clippers out, spread her hand over the soil they had pierced, only for a moment or two.  Then she went on, “So to find out, I have sent a message to Aero at ALL Corp asking him to kidnap the original mouse for me to interview it.  I will … get … answers.”

Alexa sat up straight and spoke rapidly.  “You sent a message to Aero?  I work for him.  I stumbled on the problems in plant DNA during my research for ALL Corp.”  She paused to think.  “He might be inclined to help faster if I can talk to him, but since you said I mustn’t leave here, I don’t know how we could arrange that.”

Echo looked up with eyes suddenly eager.  “You work for ALL Corp? Does that mean…” she paused.  “I am sorry if I sound mercenary but – do you think Aero might give me a discount on the charges, since the answers I get might help you? I mean, it would have to be an expensive operation, finding one mouse, and I do not earn a great deal of money, or have much in the way of savings.”

Alexa nodded and smiled – the first wholehearted smile since she had arrived.  “I won’t let him charge you anything.  And after all, I think he wants his precious scientist back.”

Echo closed her eyes and sighed, sagging as if enormous tension had left her shoulders.  While she thought Alexa was exaggerating, it was still good news.  “Oh, gods – that was my big fear, Alexa.  I must talk to that mouse.  And well – I am rich in life, but very poor in gold.”

“The imp!” Alexa exclaimed brightened up and broke another lovely smile.  “Harry said he’d send an imp over to check up on me every day, remember?  Echo, get me a piece of paper and a pen.  I’ll ask Aero to come here, and I’ll explain why we need that squeaker.”

Echo was so relieved she practically hopped to her feet like an acrobat and darted into the house, coming out just a minute or two later with parchment paper, a matching envelope, and a pen, along with a clipboard to write on.  She’d even remembered to take off her dirty gardening gloves before handling everything (though her floor was now covered with scattered soil).  She gave these to Alexa and then sat down in the cleared portion of the garden, not working, just rolling and stretching her shoulders.

Alexa leaned over and started to write.  She didn’t make the message too complicated – the last time she’d tried to explain something to Aero, she’d ended up having to translate her own words.  Once finished, she put the letter in the envelope and licked it shut.  “Now all we have to do is wait for the imp.”

“Did you ask Aero to come and visit us?  We cannot continue to communicate by letter, it is too slow.  Once I heard from him, I was going to make the trip to Hellifyno…” she let her voice fade away.  As soon as she learned from Weary that Hellifyno still had a portion of its magic, she had known she would have to go there.  She also knew that being there would be brutal for her.

Alexa looked down and nibbled on her finger.  She kind of wanted to see Aero.  “I did tell him that.  Told him to do it with the utmost urgency.  He’ll come.”