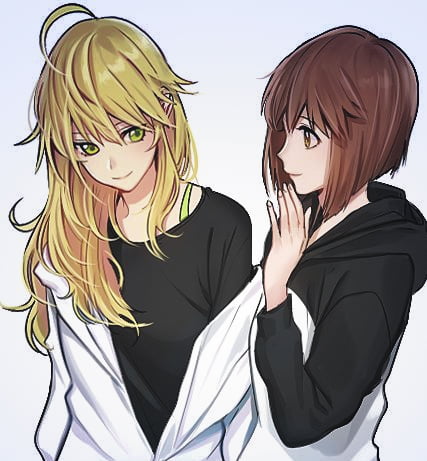 Even to this day, with Lily standing on the balcony waiting for Zoey to get home, she still couldn’t believe where she was. another whole planet. the whole thought of it gave her chills down her back. but good chills. she loved Zoey, and she loved her whole telekinesis ability. she loved everything that’s happened.. other than the more recent events. Zoey being blamed for murder wasn’t the best of situations.

Lily wore a black hoodie with a white stripe going from shoulder to shoulder and went down her sleeves, a pair of jeans, and some random pair of shoes she got at the store recently. Her hair, for once, wasn’t dyed. She had washed the dye out the night before. Now, she had her full on brown hair like usual.

Her and Zoey had a idea to hit the streets for information of who would have set Zoey up. All they knew so far was that it’s another telekinetic, like Zoey. Only, possibly more advanced in their skill. Lily walked back inside and picked up the dog’s food bowls. Their heads all perked up when this happened, as if they were expecting to be fed twice in one morning. Lily waved a hand in a downward motion, and they all went back to just being in the way. Zoey and Lily had taught them to go by hand motions for things.. Entirely out of boredom.

Lily put the food bowls up and went for some paper and a pen. when she found what she was looking for, she wrote, “goin out to execute our wonderful plan. (hitting the streets for info.) i’ll cya later, my little ray of sunshine.” she doodled a quick sketch of the sun and went out the door.

It was a bit chilly out, and it looked like it was going to rain. Lily didn’t care much though. A little bit of rain never hurt anyone. As she began her walk she started to notice the lack of people. Not as many people was good, though. She started her walk in the direction of where the incident happened. She might be able to scope the area some, get some answers from people.

Lily began to feel like a detective of some sort. She went around asking for hours and hours until eventually she stopped to take a break. she took a seat outside a cafe and ordered a coffee. she pulled out her phone to check and see the time and found that it has been spammed by Zoey.

-So you went off on your own?

-how long r u gonna keep me waiting?

-i hit the sack

-that’s kept me hanging about

-ok this is getting boring.

The texts stopped there.. thank god.

Be there soon..ish. just gonna take a extra look around.-

She lied.. By accident. A man had sat him self down at the table she was at. He was tall, well built, blue eyes, and black hair. He wore a black flannel shirt with a white T-shirt underneath, and a pair of jeans. Lily was gonna get up and leave.. but she felt this might be some what interesting. The man smiled at lily and said in a calm tone, “So.. i hear your asking questions about me.” Lily’s brain drew a blank for a second, but recovered quick. She leaned in and said quietly, “What kind of balls do you have to think you can just stroll on in with out any sort of a fight..?” The man kept his smile. “Because i know you love Zoey. And not only that, but im the only person who can prove Zoey innocent.” He stated these words like they would keep Lily from slapping him. As soon as he was done, Lily smacked him hard enough to leave a mark for weeks.

This was a mistake.

The man kept his smile and said, “Huh.. so if i had to guess.. you’re the fighter. Then again, i could have just read your mind..” Lily interrupts him. “If you dont fucking get her name cleared i swear to god i’ll-“

Lily slumped back in her chair. “So what do you want?” she asks. The man’s features soften, but turned threatening quick. “I want you to deliver a message.” Lily scoffed. “A message? The fuck’s that supposed to mean?” He smiled again. but this time it was more scary than warm and welcoming. “If she doesn’t hand herself over to me… I’ll kill her parents. I know them. I figured out everything about Zoey. From birth to when her parents dropped her in that dump of a alley.”

Lily stared at him. Her eyes, if they could kill, would have torn this man to shreds by now. “Bull shit.” She called. The man chuckled. “I’m giving you a couple of weeks. dont keep me waiting long.”

When Lily got home, Zoey was on the balcony. taking Lily’s spot in the center. Zoey wore a white jacket, black shirt underneath, a pair of white sweatpants, was going barefoot, and she let her hair fall loose. It seemed like Zoey knew Lily came in, with out even having to hear the door. “It’s late.” She said, back turned to Lily still. Zoey’s jacket had fell down the length of her shoulder to the left. Zoey didn’t care much though. Lily walked up next to her and took her hand in her right and Lily then lifted her left hand in a small wave. They smiled at each other. Zoey leaned into Lily, her head on her shoulder.

Zoey began getting a bit worried. Lily knew why, too. Lily never stays quiet this long. She might as well tell her.

“While i was out i found the guy who tried to frame you.” Zoey turned back to Lily. “What? Are you hurt?” She asked, now a small bit of worried panic in her voice. A alarm went off somewhere below. Lily turned back to Zoey, a look on concern on her face. “He wants to speak with you. About you parents.. He said if you dont comply he’s going to kill them.”

Zoey froze. Lily couldn’t tell what Zoey was thinking. She couldn’t even tell if it was Zoey in front of her or not. Zoey walked back inside and began feeding the dogs, still wearing that expressionless face.

It was then Lily began questioning if she really knew Zoey as well as she thinks.